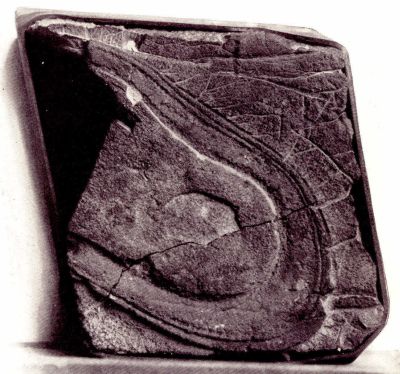 This shoe print fossil was discovered in a seam of coal in Fisher Canyon, Pershing County, Nevada.
Age of this coal is around 200 million years! And lest you think that this is the fossil of some kind of animal whose shape merely resembles a modern shoe, close-up examination of the fossil reveals that traces of a double line of sewed stitches around the perimeter of the shape are clearly visible.
It’s about a size 13, and the right side of the heel appears to be more worn down than the left.

On January 25, 1927, an amateur geologist named Albert E. Knapp was descending a small hill in the canyon, when he spotted the fossil laying topside up among a pile of loose rocks. He picked it up and took it home with him. Upon closer examination, Knapp was astounded to discover, “It is a layer from the heel of a shoe which had been pulled up from the balance of the heel by suction, the rock being in a plastic state at the time.” The shoe print was in a marvelous state of preservation – the edges of the heel were smooth and rounded off as if cut, and its right side appeared more worn than the left – suggesting it had been worn on the right foot. But what Knapp found really amazing was that the rock in which the heel mark was made, was Triassic limestone – 225 million years old – which runs in a belt through the canyon hills he had been exploring.

The rock was later examined by an expert geologist at the Rockefeller Foundation, who confirmed Knapp’s analysis. The presence of minute crystals of sulphide of mercury throughout spaces in the fossil also testified to it being of great antiquity.

The real surprise about the age-old heel imprint, however, did not come until microphotographs revealed that the leather had been stitched by a double row of stitches, the twists of the threads is very discernable. One line followed along the heel’s outer edge, and the second line paralleled the first precisely, inwards by one-third of an inch. What baffled investigators was the fact that this double-stitching had been done with thread much smaller, and more refined in workmanship, than that used by shoe-makers in 1927, when the fossil print was discovered.

What becomes of the Darwinian theory in the face of this evidence that there were intelligent men on earth millions of years before apes were supposed to have evolved?

The fossils with shoe prints are a direct challenge to Darwin’s theory of evolution. They indicate that there was at least one period of civilization before our civilization.