As per Parasara Samhita, Hanuman travelled through a lotus stem shaped tunnel to Patala Loka (South America) to find his son Matsyavallabha and rescue Rama, Lakshmana by killing Mahiravana
During battle between Rama and Ravana, Mahiravana, the maternal uncle of Ravana kidnaps Rama and Lakshmana and takes them to Patala Loka through a tunnel.
Patala Loka is described to be exactly below earth (then India) and one has to go 70000 yojanas deeper in earth to reach to reach there.
Mexico and Brazil are exactly below India and one has to dig a hole(tunnel) of that distance to travel vertically. 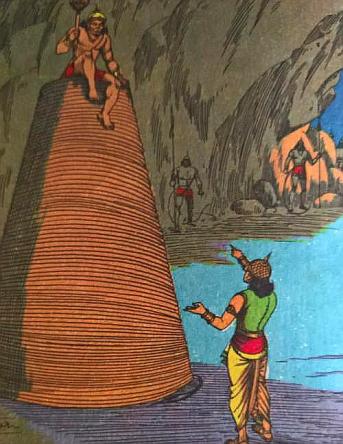 Vibhishana reveals about Ravana’s plans to bring in Mahiravana (Mairavana) into battle and kidnap Rama, Lakshmana.
Hanuman forms a pyramid like structure with his elongated tail and hides Rama, Lakshama in it while they sleep.
Mairavana selects Sucheemukha, who is an expert in digging through land and mountains, to kidnap Rama, Lakshmana.
Sucheemukha starts digging but when his face reaches the land covered by Hanuman’s tail, his face is hit hard and injured.
Head held down in shame, sucheemukha appraoches Mairavana and explains his inability to pierce through Hanuman’s defence system, where his face got burnt once it touched hair on hanuman’s tail.
Mairavana then commands mooshikamukha (Rat faced demon) to dig through the land vertically from Patala Loka and kidnap them.
MooshikaMukha digs like a Bandicoot but is also hit by strong wall build by tail of Hanuman.
With broken head he returns to his kingdom.
Mairavana decides to take up this job himself and diguises as Vibhishana.
He is surprised to see the strength of Hanuman’s tail, approaches him and says ‘Hanuman, be careful. In this night time, rakshasas with magical tricks will be wandering around. So be watchful and let me in, to confirm that Rama, Lakshmana are safely sleeping on mats made of dried grass.‘
Hanuman lets him go through his defence. Mairanava uses his siddhi ‘Anima‘ to shrink their bodies and hides them in a small box. He returns to Hanuman and advises him to be watchful of demons during night time and leaves.
Mairavana reaches Patala Lanka, calls his sister named durdanDi and reveals that he brought Rama, Lakshmana with him to sacrifice them to Goddess Durga. He asks her to bring fresh water from a pond outside their fort for this process.

Real Vibhishana reaches Hanuman and warns him about tricky Rakshas wandering at night. He seeks permission to visit Rama, Lakshmana.
Hanuman says ‘My left eye is twitching and i get bad omens. Did you not just visit them and ensured their safety moments ago ?‘
Stunned Vibhishana explains that this is his first visit that night. Maybe Ravana’s maternal uncle Mahiravana, who is an expert imposter, could have come earlier.
Both check inside to find Rama, Lakshmana missing.
Hanuman gets depressed and curses himself for the lapse.
He gets angry and spread his body through one of the ashta siddhi ‘Mahima’ (which enlarges body), and asks for Mairavana’s whereabouts.
Vibhishana says that, to reach Patala Lanka, there are two ways. One is a smaller tunnel which is shaped like lotus flower stem and it goes from Ravana’s Antahpuram (inner fort). Other is wider and suitable for anyone to travel, but is protected by demon army of Ravana. Fighting with them can waste your time.

There are few such tunnels which are said to be leading to Patala Loka. The Patalkot valley in the Chhindwara district of Madhya Pradesh, India must be the second among them.

Hanuman secretly enters through first tunnel, which is lotus stem shaped and reaches bottom of a pond. He swims through the pond to float on its surface and sees Patala Lanka.
He sits on a Samee tree (Prosopis cineraria) and examines the Patala Lanka fort built with seven layered compound walls.
Mairavana’s sister durdanDi approaches that tree while crying. Hanuman appears in front of her and asks about her problem. 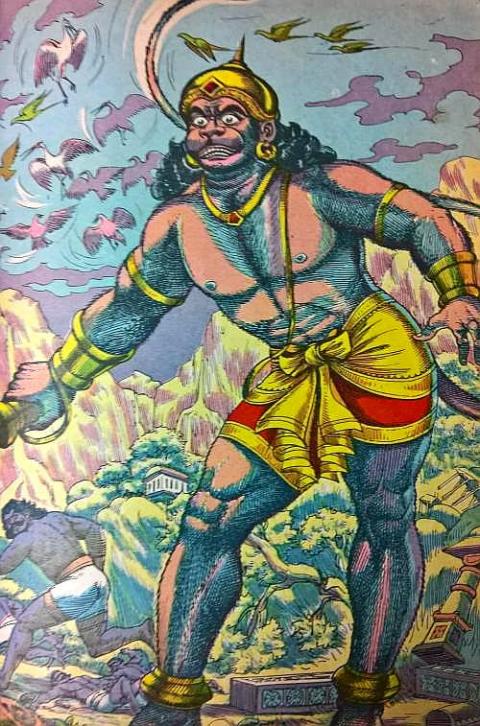 durdanDi had a husband named kaaladanDa, who earned good name among rishis. They had a son named neelamEgha.
One day, devarshi narada approached their kingdom and declared his prophecy that neelamEgha will become king of Patala Lanka in future. He has wheel, hook, flag, fish etc symbols in his feet, and according to foot reading, he will rule this kingdom.
Immediately, his maternal uncle Mairavana gets insecured and arrests neelamEgha.
He also put me in jail. Today he appeared in happy mood and ordered me to fetch water from this pond for sacrifice of Rama, Lakshmana.
Depsite being protected by Hanuman, how did these brothers get kidnapped by this demon ? Why don’t Vanaras come and save them ?

Hanuman reveals his identity and promises to make her son as king of this Patala Lanka, if she helps in rescuing Rama, Lakshmana.
durdanDi reveals that entrance of this fort is through a Balance gifted by Lord Siva. It will not make any noise, nor break if Mairavana’s army or his friend marches through it. But if an enemy, even in a tiny form steps on it, an alarm bell rings and army treats it as war signal.
Hanuman does not care for it and as soon as he steps on it, bell rings.
Mairavana’s army consisting of warriors like Saardoolamukha (tiger faced), Gaardhabhanisvana (donkey voiced), Satajihwa (100 split tongued), Deerghajihwa (elongated tongued), Swamukha (dog faced), Vakranasika (twisted nosed) and many more with trident like teeth, elephant like ears, sword like hair etc came out in anticipation that an enemy entered their fort.
Hanuman expands his body and kills all of them.

To stop him, MatsyaVallabha comes in and challenges Hanuman for a fight.
Hanuman hits matsyavallabha on chest but he hits back on head. Hanuman shakes up with this punch but within recovers within seconds.
Both run towards each other and hanuman catches his legs and spins him in air.
Matsyavallabha catches hanuman’s throat and squeezes it. Unable to withstand pressure, hanuman releases him.
While they continue to fight, Hanuman wonders who must be this powerful young guy.
Hanuman says that Nobody can survive his punches on chest but you are still able to fight. Who are you ?’
Matsyavallabha reveals that he is son of Hanuman.
Surprised hanuman does not reveal his identity but continues to ask ‘Who is Hanuman, and how are you his son ? Who is your mother ?

Birth of Matsyavallabha as Son of Hanuman

Matsyavallabha reveals that, after Seetha was kidnapped by Ravana, Hanuman found her in Lanka and to reach her, Vanaras built a bridge over ocean. During that process Hanuman, who was working hard, cleared sweat from his forehead and it fell into ocean.
In water, a sea monster named DeerghadEhi (elongated bodied), which was a Makara, was suffering from hunger, drank that sweat and felt satisfied.
She gave birth to me and as i was born out of an unusual process and out of two different species, i grew up quickly in few days and also got strength of Hanuman along with stamina of my mother.
My mother was a Gandharva woman, who was cursed by Matanga Rishi, who also revealed that once she gives birth to a son, she will be free of that curse.
Mairavana spotted and appointed me as a protector of this fort.
Upon hearing this story, Hanuman reveals that his identity and blesses him.
Matsyavallabha invites his father to his home but Hanuman refuses as he is in an urgency to rescue his Lord. 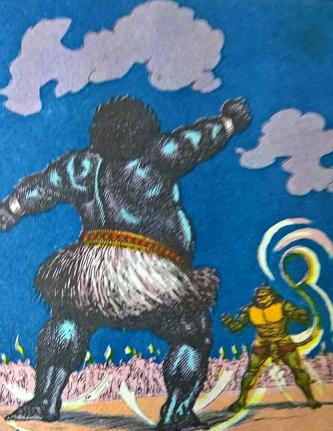 Hanuman searches through the fort and finds King Mahiravana. He jumps onto him and hits on his head.
Both fight with expanded bodies. By a punch on chest by Hanuman, Mairavana collapses.
Assuming him to be dead, hanuman continues his search for Rama, Lakshmana.

Mairavana recovers and attacks hanuman again from back. Despite 21 attempts to kill, Mairavana does not die even after his intestines are pulled out.
Surprised Hanuman starts wondering about how to end this demon king. At this time, durdanDi enters and reveals that Mairavana’s life support is a secret and it is among five bees hidden between stones.
Mairavana starts crying that his death secret is revealed and asks durdanDi to forgive him.

Hanuman says that it is too late and a demon like you does not deserve to live.
He crushed Mairavana under left leg and with right leg moves the stones where bees are hidden.
In one attempt he crushed all five bees under his right leg.
As his life support dies, Mahiravana also dies under hanuman’s left leg.

Hanuman releases neelamEgha from jail and corronates him as king of Patala Lanka by washing his body with the water brought by his mother.
neelamEgha takes blessings of Hanuman to rule his kingdom as per dharma.
Hanuman collects the box containing shrinked bodies of Rama, Lakshmana and on his way back meets his son Matsyavallabha.
He orders his son to continue protecting the king of Patala Lanka and returns to Lanka.

This Matsyavallabha (born to a fish or sea animal) is also regarded MakaraDhwaja (Makara is the longest ocean animal), as he has its stamina.
The ayurvedic medicine siddha makaradhwaja is used for increasing stamina and vitality of men and is named after him.

La Ciudad Blanca [la sjuˈðad ˈblɑnkɑ], Spanish for ‘The White City‘) in Honduras, Central America is supposed to be the ‘Lost City of the Monkey God‘ where, legend says that local people worshipped huge ‘Monkey Sculptures‘.
Theodore Morde – an American adventurer, claimed that sacrifices were made by local Indians to a gigantic idol of an ape.
The movie Apocalypto shows tribes of america offering sacrifices of humans.
After King MahaBali settled in America, his men continued the demonic sacrifices and few other practices.
The discovery of 5000 years old Havan Kund in Peru is one such example. 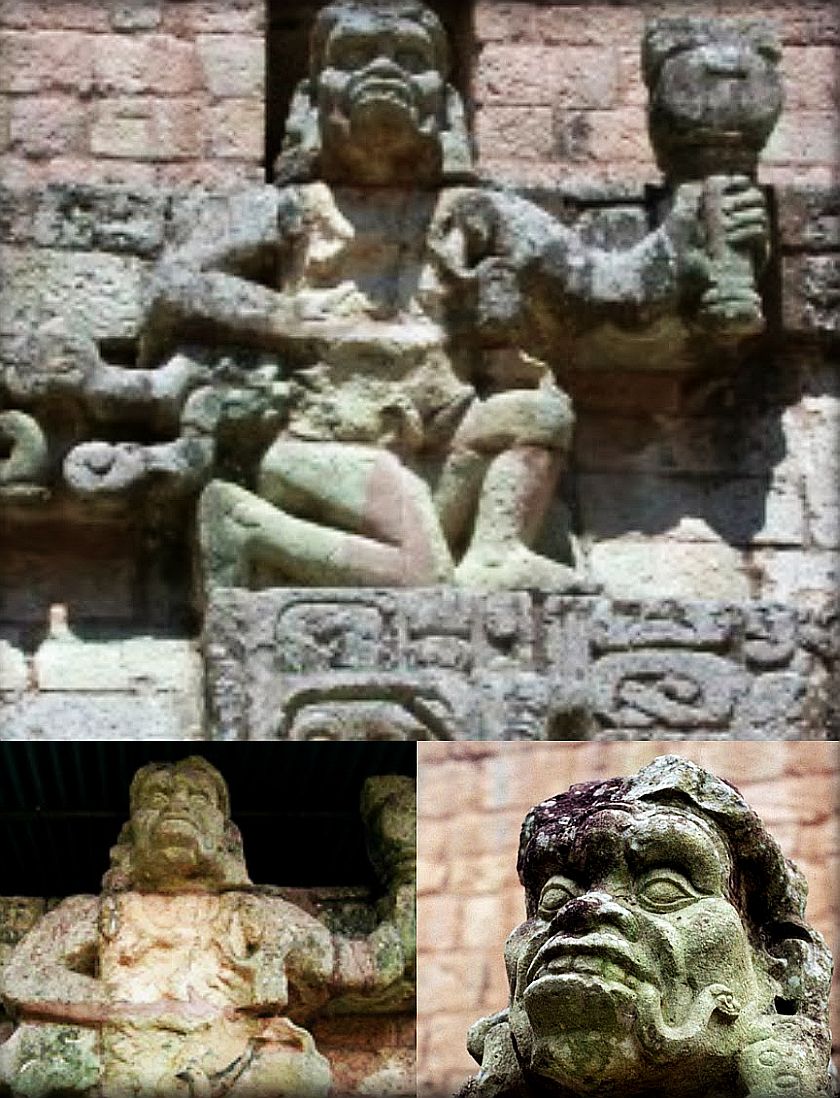 Mayan was Father-in-Law of Ravana

Mayan, who wrote calender called Surya Siddhanta was father-in-law of Ravana and he built multiple cities and pyramid like structures across North and South America.
He is the origin of Mayan civilization, that thrived in mexico and south america.

This Hanuman’s Panchamukha avatar appears while killing SatakanTa Ravana, which is a different story.