Earth is believed to have land as Pangaea (pan-jee-ə), which was a supercontinent that existed during the late Paleozoic and early Mesozoic eras, forming approximately 300 million years ago.
The oldest epic sanskrit poem, Ramayana, composed by sage Valmiki, gives clues about this single large continent that existed approximately 200,100,000 years ago. 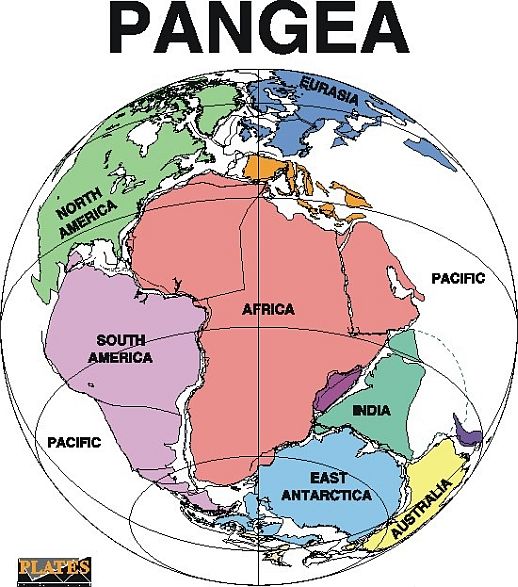 The single global ocean which surrounded Pangaea is accordingly named Panthalassa.
Pangea must have been drowned into Panthalassa by Hiranyaksha and was later restored by Varaha – third incarnation of Vishnu as a wild boar and that is when present aeon/creation of Sveta Varaha Kalpa started. (according to Vishnu Purana and Bhagavata Purana)

The legend of King Sagara provides many vital clues that signify an intimate knowledge of the ancient world’s geography including Pangea Supercontinet Map.
The episode detailing the story of King Sagara represents a time going back approximately 200,100,000 years ago. As the Ramayana records at that time there was only One Landmass Surrounded by One Ocean.

King Sagara said to his sons :

Translation : Oh, sons, you may therefore proceed to search for the horse and its thief on this Entire Earth which is Garlanded by the Ocean. Safety upon you all. [Ramayana : 1-39-13]

Many years later King Sagara’s descendant, King Bhageeratha brought the Ganges River to the Earth planet in order to liberate the Souls of the Sons of Sagara who had been burnt to Ashes by the Sonic energy of Sage Kapila.
Bhageeratha is described as guiding the Ganga into the Ocean-like Ditch created by the Sons of Sagara.

Translation : King Bhageeratha followed by Ganga has gone to the Ocean-like Ditch which was dredged up by the sons of Sagara, and entered the subterranean regions of earth where the sons of Sagara were rendered into ashes. Thus Viswamitra continued his narration about the Descent of river Ganga. [Ramayana : 1-44-1]

According to the Ramayana, over 100,000 years earlier, the 60,000 sons of Sagara, had been born from an Egg-like guard. They were then placed for a long duration into test tubes and nurtured within them, clone-like, until they were youths.

Translation : The caretakers brought up those siblings in vessels filled with ghee, clarified butter, and after a protracted [delayed] time all of the children attained youthfulness. [Ramayana : 1-38-18]

Geological Sciences refer to a time when “The Tethys Sea began dividing Pangaea into two super continents, Laurasia and Gondwana.”
And “The Tethys Sea was an ocean that existed between the continents of Gondwana and Laurasia during much of the Mesozoic era, before the opening of the Indian and Atlantic oceans during the Cretaceous period.”

According to the Ramayana this dividing of the Single Earth’s landmass and the creation of Ocean-like ditches began when the 60,000 sons of King Sagara embarked on their mission to find their Father King Sagara’s Sacred Horse.
Indra had taken the guise of a Demon and stolen the sacred horse.
Their father King Sagara thus ordered his sons :

Translation : ‘Oh, sons, let each prince advance searching one square yojana of the Earth. By my order you dig up the earth until you find the horse, in your search of the thief of that horse’. [Ramayana : 1-39-14b, 15]

Thus after searching the entire Earth, which at the time was a Single Landmass Surrounded by a Single Ocean, the Princes continued seeking the Sacred Horse by digging into the Earth.
In this way they Divided the Continent into sections thus signifyng the initial separation of the Continents. Based upon this feat of the Princes the Oceans were named after their father King Sagara. And thus the world’s Oceans are referred to as Sagar even today.

Many generations later, Lord Rama was born as Bhageeratha’s descendent in same Ikshvaku dynasty and by that time, oceans have already seperated land mass on earth into multiple continents, the descriptions of which were given through Sugreeva in Kishkinda Kanda of Ramayana (descriptions of arabia, arctic ocean, australia, new zealand, peru, south america etc).

The fact that Ramayana was composed and events happened around 2 million years ago confirms the original geography of earth.