Etruscan civilization of Ancient Italy existed in the area of Tuscany, western Umbria, and northern Latium.
Ancient Romans called its creators the Tusci or Etrusci and the Etruscans occupied the region to the north of Rome, between the Arno and Tiber Rivers to the west of the Apennine Mountains. The Romans were first a subject people of the Etruscans and later their conquerors. 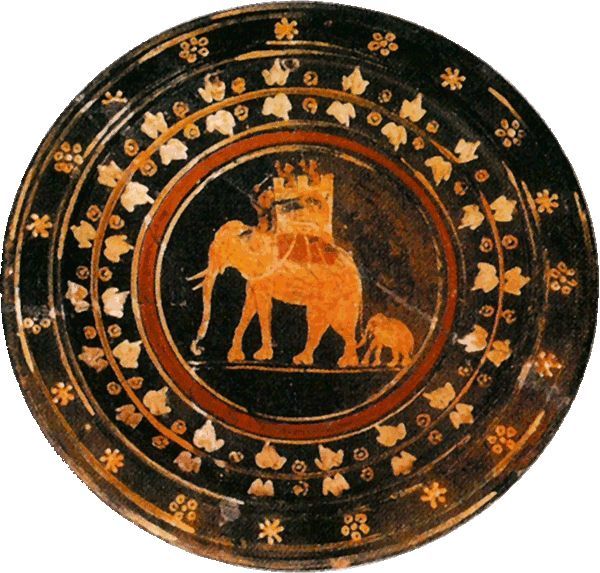 Etruscan culture was well-developed and advanced but distinctively different from the cultures of the other peoples in the region. This distinctive difference immediately led to the question of where did the Etruscans originate.
There were many speculations that Etruscans were Pelasgians or the Sea People, who invaded the egyptian empire around 1200 BC.
During 19th century, it was discovered that most of the languages of Europe belonged to one big language family called Indo-European but Etruscan was not one of them.
The technology of DNA analysis has been applied to the question of origins. A study published in the April 2007 issue of The American Journal of Human Genetics reports finding eleven lineages of mitochondrial DNA in Tuscany that have not been found elsewhere in Europe but do occur in the Near East.

Ancient Italian city of ‘Ravenna‘ is believed to be an Etruscan name and the word resembled ‘Ravana‘, the villain of Ramayana.
The above Bronze panel depicts the abduction of Seetha by Ravana.
In center of painting observe a dead deer ‘Mareech‘ and a tussle between Ravana and Seetha.

Ravana removes his mask/helmet to reveal his real identity before kidnapping Seetha.
On the right Ravana takes Seetha to Lanka via the aerial-route depicted by the winged-horse.
On the Left is the bird ‘Jatayu‘ who is slained by Ravana.

The bottom panel has unclear or semi-erased pictures of Goddess riding on a Lion (Durga) and two Lions attacking Bulls to kill them.

In another Etruscan paiting, Vibishana pleads with Ravana to release Seetha and avoid war with Lord Rama. Notice that it is the same bearded Ravana that one sees in the previous sketch.
Seetha is seated with her head bowed (not clear in the picture).

One can notice More paintings of Etruscan Civilization depicting scenes from Ramayana and Bhagavata Purana.
It is said that Rome is named after Rama.

The top picture in this page deptics and elephant and calf, where elephant is used to ride.
This belongs to 3rd century BC and is found at Capena, Italy.
Europeans first came in contact with live elephants only in 327 BC, when Alexander the Great descended into India from the Hindu Kush.
One of the earliest depictions of an elephant in Middle Eastern history appears on Shalmanezer’s black obelisk dug up in Iraq and dated to 860 BC.

All these conclude that Etruscan Civilization is somehow linked to Indian subcontinent.
After the death of Ravana, Vibishana tookover as king of Lanka and ordered few leftover loyal people of Ravana to leave his kingdom.
It is believed that few giants have moved to north and south america, while others migrated towards europe and middle-east.