Japanese Goddess Benzaiten (弁才天, 弁財天) is a Japanese Buddhist goddess, who originated from the Hindu goddess Saraswati.
Worship of Benzaiten arrived in Japan during the 6th through 8th centuries, mainly via the Chinese translations of the Sutra of Golden Light, which has a section devoted to her. She is also mentioned in the Lotus Sutra and often depicted holding a biwa, a traditional Japanese lute, just as Saraswati holds a veena. Benzaiten is a highly syncretic entity with both a Buddhist and a Shinto side.

Benzaiten is the goddess of everything that flows: water, words, speech, eloquence, music and by extension, knowledge. The original characters used to write her name read “Biancaitian” in Chinese and “Bensaiten” in Japanese (辯才天) and reflect her role as the goddess of eloquence.
Because the Sutra of Golden Light promised protection of the state, in Japan she became a protector-deity, at first of the state and then of people.
Lastly, she became one of the Seven Gods of Fortune when the Sino-Japanese characters used to write her name changed to 弁財天 (Benzaiten), emphasizing her role in bestowing monetary fortune. Sometimes she is called Benten although this name usually refers to the god Brahma.

In Rig-Veda (6.61.7) Saraswati is credited with killing the three-headed Vritra also known as Ahi (“snake“). Vritra is also strongly associated with rivers, as is Sarasvati. This is probably one of the sources of Saraswati/Benzaiten’s close association with snakes and dragons in Japan instead of white swan as in India.

Benzaiten the Goddess of Music and Good Fortune

In Japan, Sarasvati is known by different names.
She is associated with different faculties like music, sweet voice, wealth, fortune, beauty, happiness, eloquence, wisdom and as one who confers strength on warriors.

According to documents like ‘Kokei, recorded by Buddhist monks, link the periodic appearance of comets with the goddess Benzaiten.
For example, the comet that appeared in 552 AD, and again in late 593 AD were associated with deity Benzaiten.
These records suggest that the exchange of cultural and spiritual ideas from Buddhism and Hinduism in India to Japan, through deities such as Benzaiten, occurred well before the 5th century. 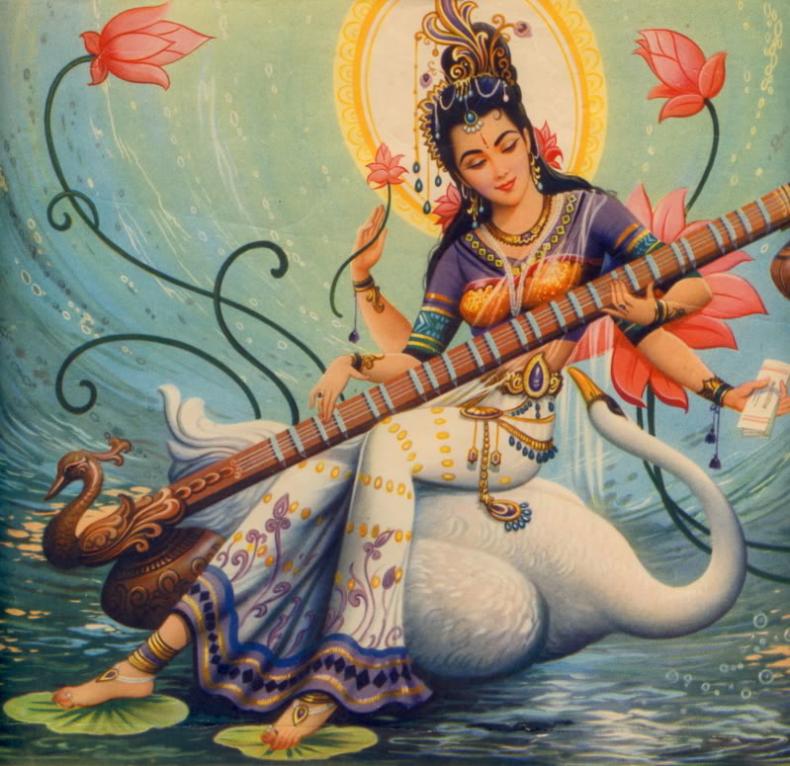