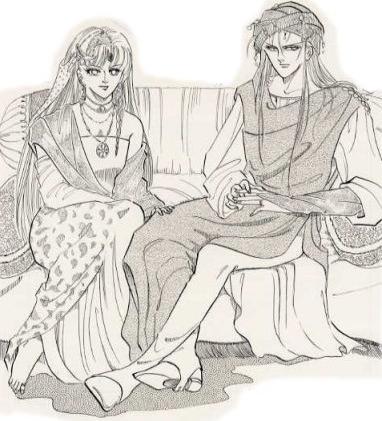 Rig Veda [10.10] has a conversation where Consanguineous Relationship and invention of night, first death are discussed by Yama and his twin sister Yami.
Yama and Yami were children of Vivasvat (an aspect of Surya, the Sun God) and Saranyu (the Cloud or Aurora) is the primeval human, the first of mortals, and Yama was the first living creature to die and to go to the afterlife where he became the undisputed and feared king.

Once Yami was madly in love with her twin brother Yama. She wanted to have sex with him and pined for the refusal of his brother.
Yami desired that Yama should induce an embryo in her womb. It was a natural instinct that aroused in her mind and body; after she had attained puberty.
Yama replied, ‘I do not like the sexual relation between a male and a female having similar blood. The Gods see everything’.
Consanguineous marriage is now abandoned in most parts of the world as it is proved hazardous for next generations.
The children from such marriages or relations fall prey to hereditary diseases.
This modern scientific concept is presented by Yama in the remote past and is written in the Rig Veda.
Yama says that the Gods look everywhere, while Yami did not bother.
Yami did not feel shame or blush even if the Gods see their coitus. Yama was the first man, in the world, to develop the modesty or blush about sexual mating. He did not like anybody, even the God, to see copulation.
Yami opposed Yama’s opinion and said that even the Gods performed shameful actions in the past, so neglect them and love me and give me a child.
What is shameful in it? Why do you worry to behave naturally? says Yami.

Yami was true that in the past Gods did multiple sins and wrong deeds like cheating others, adultery etc. But they did not produce children from it.
Yama was more worried about next generation that will be produced from this Consanguineous Relationship, as humans transfer their genes and possibility of genetic diseases and shrinking of Y Chromosome in humans can lead to extiction of male population.
Yama states the truth that we should never perform the same mistakes done by our ancestors, but we should correct it and progress.
Yami says, ‘Prajapati (creator Brahma) has joined us together since we were in a womb. Prajapati has made us a couple. We should not go against the rule of nature.’
Yami further says, ‘you are afraid of the sin, which is not a sin at all. Moreover there is nobody to look at our coitus. Then what is the sin?’

Yami suggests that if somebody else sees a bad action, then only it becomes a sin. If it is not seen by anybody, there is no sin at all.
She indicates that society decides what is sin and what is not.
Yami says further, ‘I am anxious to sleep with you and offer my body as a ‘Patni’ (wife) to you.’
Here a word ‘Patni’ is used but the word ‘Vivaha’ is not used.
The word ‘Patni’ [Pat + Ni], where Pat means to lie down and Ni means to carry or to take to.
Then Yama advised her to select another man and get sexual pleasure from him. Which means that Yama was not against the sexual contact of a man with a woman; but he opposed sexual union of the brother with a sister from the same parents.
Yama further told that a time is approaching when marriages between brother and sister will be prohibited. Yama revealed the future which is prevalent in today’s world.
Yama made that rule, which ruled all over the world.
In later days, Rishis formed gotras based on DNA and Y Chromosome to maintain the lineage and avoided marriages within the blood relations.

Rigveda 10/12/6 states that Yama once hit his mother, but the context is not mentioned.
It is possible that Yama’s mother might have suggested him to have sexual intercourse with her or might have supported her daughter Yami’s request and Yama had denied it strongly.

Rigveda 10/13/4 states, ‘for the benefit of the mankind who refused immortality and embraced death? In the Yajna of Bruhaspati, Yama sacrificed his beloved body.’
He was the first human to experience death.
Upon her twin brother’s demise, Yami was crying and when Gods tried to console her, she replied, “How can I not mourn, for today is the day of my brother’s death!”
It was always “today“, because time was not yet invented or day and night was happening in an eternal present.
To cure her grief, the Gods created night. From that time, night follows day, and the cycle of time began, because time cures all sorrows.
Only after the death of Yama as human and reincarnated as God of after life, night was invented and time was calculated.