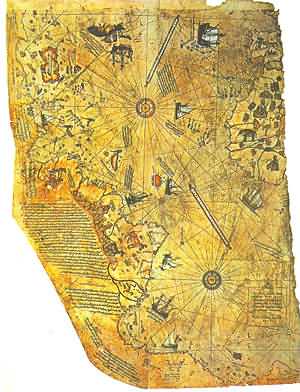 In 1929, a group of historians found an amazing Piri Reis map drawn on a gazelle skin.
Research showed that it was a genuine document drawn in 1513 by Piri Reis, a famous admiral of the Turkish fleet in the sixteenth century.

His passion was cartography. His high rank within the Turkish navy allowed him to have a privileged access to the Imperial Library of Constantinople.

The Turkish admiral admits in a series of notes on the map that he compiled and copied the data from a large number of source maps, some of which dated back to the fourth century BC or earlier.

The Piri Reis map shows the western coast of Africa, the eastern coast of South America, and the northern coast of Antarctica. The northern coastline of Antarctica is perfectly detailed. The most puzzling however is not so much how Piri Reis managed to draw such an accurate map of the Antarctic region 300 years before it was discovered, but that the map shows the coastline under the ice. Geological evidence confirms that the latest date Queen Maud Land could have been charted in an ice-free state is 4000 BC.

The official science has been saying all along that the ice-cap which covers the Antarctic is million years old.
The Piri Reis map shows that the northern part of that continent has been mapped before the ice did cover it. That should make think it has been mapped million years ago, but that’s impossible since mankind did not exist at that time.

Further and more accurate studies have proven that the last period of ice-free condition in the Antarctic ended about 6000 years ago. There are still doubts about the beginning of this ice-free period, which has been put by different researchers everything between year 13000 and 9000 BC.

The question is: Who mapped the Queen Maud Land of Antarctic 6000 years ago? Which unknown civilization had the technology or the need to do that?

It is well-known that the first civilization, according to the traditional history, developed in the mid-east around year 3000 BC, soon to be followed within a millennium by the Indus valley and the Chinese ones. So, accordingly, none of the known civilizations could have done such a job. Who was here 4000 years BC, being able to do things that NOW are possible with the modern technologies?