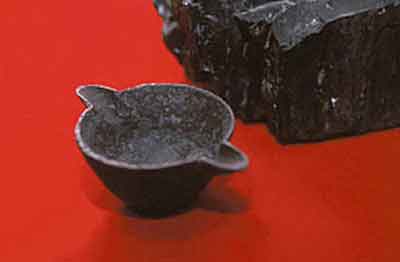 Cast Iron made Cup was found in 1912 in Oklahoma in a piece of coal with an estimated age of more than 312 million years.
In 1912 an electric company employee in Arkansas broke open a large lump of coal, revealing a man-made iron pot. The original coal bed was reportedly mid Pennsylvanian age about 300 million years old by conventional geology.
The following text is a letter from Frank Kennard, the man who found an iron pot embedded in a large lump of coal. The Creation Evidence Museum has a copy of this letter on file.

While I was working in the Municipal Electric Plant in Thomas, Okla in 1912,
I came upon a solid chunk of coal which was too large to use. I broke it
with a sledge hammer. This iron pot fell from the center, leaving the impression,
or mould of the pot in a piece of the coal. Jim Stull (an employee of the company)
witnessed the breaking of the coal, and saw the pot fall out. I traced the source
of the coal, and found that it came from the Wilburton, Oklahoma Mines.

The coal from the Wilburton Coal Mines is assigned an evolutionary date of Mid Pennsylvanian (295 million years.)