Ancient footprints of Acahualinca (Spanish Pronounciation: [akawaˈliŋka]; Spanish: Huellas de Acahualinca) exist in Managua, Nicaragua near the southern shore of Lake Managua (Lago Xolotlán). The region was once called “El Cauce“.
Huellas de Acahualinca is referred to the ancient footprints left thousands of years ago at the borders of Lake Managua. Workers found a track of footprints by accident in 1874. Later studies proved that these footprints are 6000 years old, which makes them the oldest human footprints on the American continent.
Nicaragua (nɪkəˈrɑːɡwə/ nik-ə-rah-gwə/ˌnɪkəˈræɡjuːə/ nik-ə-rag-yoo-ə), officially the Republic of Nicaragua (Spanish: República de Nicaragua [reˈpuβlika ðe nikaˈɾaɣwa]), is the largest country in the Central American isthmus, bordering Honduras to the north and Costa Rica to the south.
The country is situated between 11 and 14 degrees north of the Equator in the Northern Hemisphere, which places it entirely within the tropics. 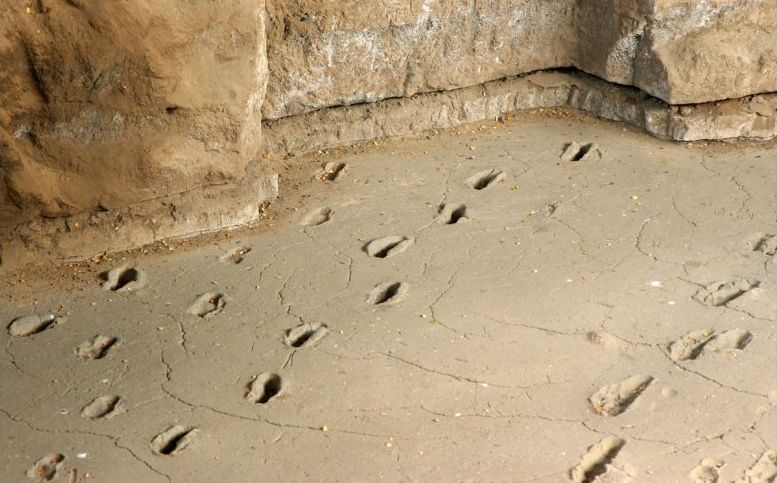 Fossilized footprints of several animals are also present, but the fact that they intersect the human footprints shows they were not traveling with the people.

The tracks are fossil Late Holocene human footprints left behind in volcanic ash and mud, which solidified about 2000 years ago, shortly after the group of up to 15-20 people passed by.

Volcanic activity is the reason behind the conservation of the prints though. The original prints were left in a layer of volcanic mud. When a volcano nearby erupted – researchers are not sure which one – a layer of volcanic ash rained down on the footprints and perfectly conserved them.

Only part of the tracks has been found, the other parts probably being covered by volcanic material. In 1978, Nicaraguan researcher Jorge Espinoza excavated an area close to where the footprints ended to see if they would find more. At a depth of 4 meters they indeed found more prints, and the track is believed to continue even further.

In 1874, construction workers discovered the footprints. The United States medical doctor and archaeological collector, Earl Flint, brought the footprints to the attention of the international science community and media in 1884.
The Carnegie Institution of Washington began the first scientific analysis and excavations of the area in 1941 and 1942. They also constructed a museum and a building to protect the footprints.
Work was continued by Joaquín Matilló, Allan L. Bryan and Jorge Espinosa in the 1960s and 1970s. Allan L. Bryan, from the University of Alberta, used radiocarbon dating to determine the age of soil humates, from a buried soil directly underlying the footprints, to 5,945±145 radiocarbon years Before Present.
Based upon this date, he estimated that the footprints dated to about 5,000 Before Present.
But, later dating of the volcanic deposits in which they occur, known as the Masaya Triple Layer, demonstrated that the fossil tracks are only about 2,120 ± 120 years old.

In 1978, the Nicaraguan researcher Jorge Espinosa continued the excavation near the termination of the original excavation. He uncovered more footprints at a depth of 4 meters.[4] The track is believed to continue further.
Specimens of these footprints can be viewed at both the Peabody Museum of Archaeology at Harvard University and the United States National Museum.

At the Huellas (track in Spanish) de Acahualinca (Nahuatl word with several meanings) a small museum is set up in 1953 by Nicaraguan scientist Leonor Martínez, later in 1989, was rescued, restored and fitted out with the support of “ASDI” and the Historical Museum of Sweden.
Besides observing the footprints you can also see some artifacts found here as well as in other parts of Nicaragua. Pre-Columbian tools, a scull from León Viejo, and conserved mammoth footprints form part of the collection. Huellas de Acahualinca is a small but very interesting site.