Diamond Sutra (Sanskrit : Vajracchedikā Prajñāpāramitā Sūtra) is a Mahāyāna (Buddhist) sūtra from the Prajñāpāramitā, or “Perfection of Wisdom” genre, and emphasizes the practice of non-abiding and non-attachment.
It is a key object of devotion and study in Zen Buddhism.
A copy of the Chinese version of Diamond Sutra, found among the Dunhuang manuscripts in the early 20th century by Aurel Stein, was dated back to May 11, 868 and is the earliest complete survival of a dated printed book. 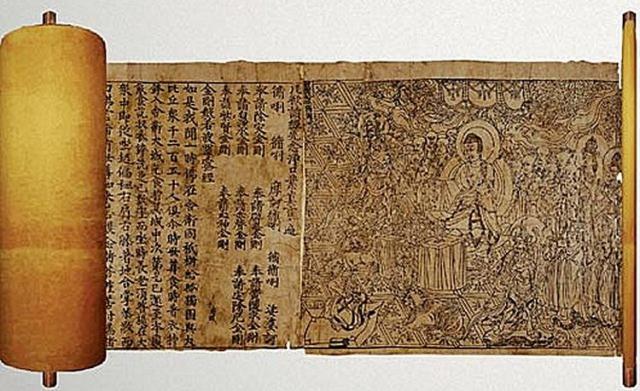 The original manuscript was one of many discovered in the Mogao Caves of Dunhaung, China.
A Daoist monk, Wang Yuanlu, discovered the so-called Dunhaung manuscripts in 1900.
“Diamond Sutra” is now recognized as one of the world’s great literary jewels.
Sutras are very important to Buddhism, a religion that developed in what is now India and spread to China hundreds of years before the Diamond Sutra was printed in 868 CE.
The Diamond Sutra is a teaching from the Buddha himself. The book earns its name from being as short (it can be chanted in about 40 minutes) and sharp as a diamond blade, cutting through worldly illusions.
The version of the book printed in 868 CE is a collection of seven rectangular woodblock prints pasted together to form a scroll.
The Sanskrit title for the sūtra is the Vajracchedikā Prajñāpāramitā Sūtra, which may be translated roughly as the “Vajra Cutter Perfection of Wisdom Sūtra.”
The Diamond Sutra is also called by the name Triśatikā Prajñāpāramitā Sūtra (300 lines Perfection of Insight sutra).

Translations of this title into the languages of some of these countries include:

Buddhist philosophers such as Asanga and Vasubandhu wrote commentaries on the sutra.
The first translation of the Diamond Sūtra into Chinese is thought to have been made in 401 CE by the venerated and prolific translator Kumārajīva.
His translation has been particularly highly regarded over the centuries, and it is this version that appears on the 868 Dunhuang scroll and is the most widely used and chanted Chinese version.
Other translations from Sanskrit to Chinese were done in later centuries by Bodhiruci in 509, Paramārtha in 558, Dharmagupta (twice, in 590 and in 605~616), Xuanzang (twice, in 648 and in 660~663), and Yijing in 703 CE.
The Diamond Sūtra gave rise to a culture of artwork, sūtra veneration, and commentaries in East Asian Buddhism. By the end of the Tang Dynasty (907) in China there were over 800 commentaries written on it (only 32 survive), such as those by prominent Chinese Buddhists like Sengzhao, Xie Lingyun, Zhiyi, Jizang, Kuiji and Zongmi.[14] One of the best known commentaries is the Exegesis on the Diamond Sutra by Huineng, the Sixth Patriarch of the Chan School.

contains the discourse of the Buddha to a senior monk, Subhuti. Its major themes are anatman (not-self), the emptiness of all phenomena (though the term ‘Shunyata’ itself does not appear in the text), the liberation of all beings without attachment and the importance of spreading and teaching the Diamond sutra itself. In his commentary on the Diamond Sūtra, Hsing Yun describes the four main points from the sūtra as giving without attachment to self, liberating beings without notions of self and other, living without attachment, and cultivating without attainment.
According to Shigenori Nagamoto the major goal of the Diamond sutra is: “an existential project aiming at achieving and embodying a non-discriminatory basis for knowledge” or “the emancipation from the fundamental ignorance of not knowing how to experience reality as it is.”

Throughout the teaching, the Buddha repeats that successful memorization and elucidation of even a four-line extract of it is of incalculable merit, better than giving an entire world system filled with gifts and can bring about enlightenment. Section 26 also ends with a four-line gatha:

All conditioned phenomena : Are like a dream, an illusion, a bubble, a shadow,
Like dew or a flash of lightning;
Thus we shall perceive them