Koh-i-Noor or Kohinoor Diamond (Persian meaning : “Mountain of Light”) is a diamond that was originally installed as left eye of Goddess Bhadrakali in town of Warangal, India.
Koh-i-Noor was originally mined from world famous diamond mine “Kollur mine (Coulour or Gani)” in the Guntur District, Andhra Pradesh, India. 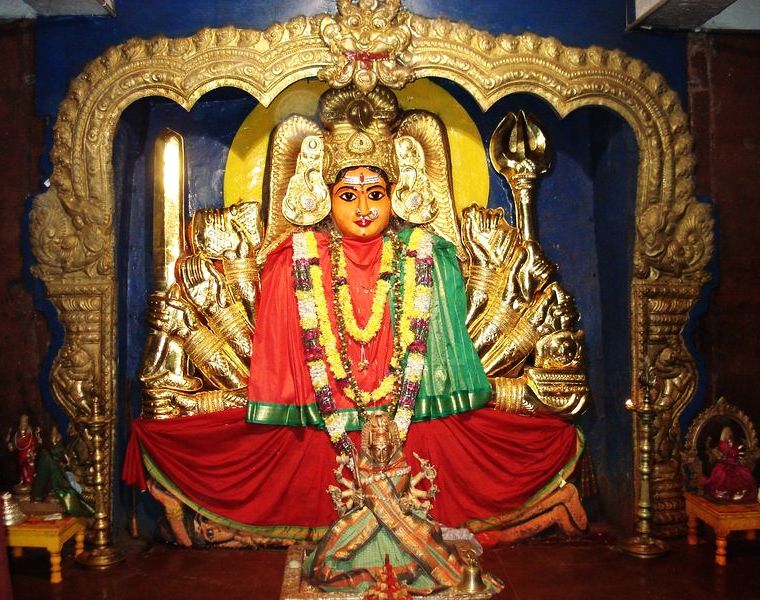 Kakatiya rulers who ruled most of the Telugu speaking lands covered by current day Telangana and Andhra Pradesh states in India between 1083 CE to 1323 CE, with Orugallu (now Warangal), as its capital posesses this diamond.

King Pulakesi II of Chalukya dynasty around 625 AD to commemorate his victory over Vengi region of Andhra Desam, constructed Goddess Bhadrakali temple and later Kakatiyas kept this as left eye of the idol, when they adopted her as their “Kula Devatha” giving her preference over other gods.

When the Tughlaq dynasty replaced the Khiljī dynasty in 1320 AD, Ghiyāth al-Dīn Tughluq sent his commander Ulūgh Khān in 1323 to defeat the Kākatīya king Prātaparuḑra.
Ulūgh Khān’s raid was repulsed but he returned in a month with a larger and determined army. The unprepared army of Kakātīya was defeated this time and the diamond was seized by the champion army of the Delhi Sultanate.

It was then owned by the Tughlaq Dynasty and Lodī Dynasty, and finally came into the possession of Bābur himself in 1526. He called the stone ‘the Diamond of Bābur‘ at the time, although it had been called by other names before he seized it from Ibrāhīm Lodī. Both Bābur and Humāyūn mention in their memoirs the origins of ‘the Diamond of Bābur‘. The last of the Tomaras, Man Singh Tomar, negotiated peace with Sikandar Lodī, Sultan of Delhi and became a vassal of the Delhi Sultanate.
A 1757 miniature of Emir Ahmad Shāh Durrānī, in which the Koh-i-Noor diamond is seen hanging on the front of his crown, above his forehead.

Humāyūn had much bad luck throughout his life. Sher Shāh Sūrī, who defeated Humāyūn, died in the flames of a burst cannon. Humāyūn’s son, Akbar, never kept the diamond with him and later only Shāh Jahān took it out of his treasury. Akbar’s grandson, Shāh Jahān was overthrown by his own son, Aurangzēb.

Shah Jahan, famous for building the Taj Mahal in Agra, had the stone placed into his ornate Peacock Throne. His son, Aurangazēb, imprisoned his ailing father at nearby Agra Fort. While in the possession of Aurangazēb, it was cut by Hortenso Borgia, a Venetian lapidary, who was so clumsy that he reduced the weight of the stone to 186 carats, while the original diamond was 793 carats.
Legend has it that he had the Koh-i-Noor positioned near a window so that Shāh Jahān could see the Tāj Mahal only by looking at its reflection in the stone. Aurangazēb later brought it to his capital Lahore and placed it in his own personal Bādshāhī Mosque. There it stayed until the invasion of Nādir Shāh of Iran in 1739 and the sacking of Agra and Delhi. Along with the Peacock Throne, he also carried off the Koh-i-Noor to Persia in 1739. It was allegedly Nādir Shāh who exclaimed Koh-i-Noor! when he finally managed to obtain the famous stone, and this is how the stone gained its present name. There is no reference to this name before 1739.

The valuation of the Koh-i-Noor is given in the legend that one of Nādir Shāh’s consorts supposedly said, “If a strong man should take five stones, and throw one north, one south, one east, and one west, and the last straight up into the air, and the space between filled with gold and gems, that would equal the value of the Koh-i-Noor.”

After the assassination of Nādir Shāh in 1747, the stone came into the hands of his general, Ahmad Shāh Durrānī of Afghanistan. In 1830, Shujāh Shāh Durrānī, the deposed ruler of Afghanistan, managed to flee with the diamond. He went to Lahore where Ranjīt Singh forced him to surrender it.

Ranjīt Singh was crowned ruler of the Punjab region. In 1829 on his death bed, according to custom in India, Ranjith Singh wished to donate the diamond to a temple. He wanted to donate it to Lord Jagannath of the Puri temple in Odisha. However, after his death in 1839 the British administrators did not execute his will.
On 29 March 1849, the British raised their flag on the citadel of Lahore and the Punjab was formally proclaimed part of the British Empire in India. One of the terms of the Treaty of Lahore, the legal agreement formalising this occupation, was as follows:

The gem called the Koh-i-Noor which was surrenderd by Shah Shuja-ul-Mulk to Maharajah Ranjit Singh and then surrendered by the Maharajah of Lahore to the Queen of England.

The Governor-General in charge of the ratification for this treaty was Lord Dalhousie and he arranged that the diamond be presented by Maharaja Ranjīt Singh’s young successor, Dulīp Singh, to Queen Victoria in 1850. Dulīp Singh was the youngest son of Ranjīt Singh and his fifth wife Maharani Jind Kaur. Dulīp, aged 13, travelled to the United Kingdom to present the jewel. The presentation of the Koh-i-Noor and the Timur ruby to Queen Victoria was the latest in the long history of transfers of the stones as a spoil of war.

Entire history of Kohinoor suggests that whichever king possesed it, died soon.
A text from the time of Koh-i-Noor’s first authenticated appearance in 1306 states that the stone carries a curse lethal to male owners. It read: “Only God or a woman can wear it with impunity.”
All male Kings who owned it, died sooner than normal.
After Goddess Bhadrakali, it was British Queen who posessed it for longer time without any major harm, though British Empire started declining from 1857 AD (7 years after the diamond went to England).
Fearing the curse, the present Queen avoids wearing the Kohinoor diamond and instead wears the Imperial State Crown.
But still the British wishes to keep this diamond in their collection even after losing multiple countries and colonies from their rule.

Kohinoor is part of Syamantaka Mani ?

Syamantaka mani is mentioned in Vishnu Purana and Bhagavatam.
Satrajit got this as a gift from Sun god and it is said to produce gold equal to eight bhāras (170 pounds) every day.
Lord Krishna asked Satrajit to present Syamantaka Mani to him but got rejected.
Satrajit later presented it to Prasen, his brother, who was also the ruler of a Yadava province. Prasen wore it often, until once while hunting in the forest while wearing it, he was attacked by a lion, which killed him and fled with the jewel. But it couldn’t get away with it, for shortly after, it was attacked by Jambavantha, who killed it after a fierce fight and took off the diamond.
When Satrajit blamed Krishna for murder and theft, he left out to prove his innocence.
As he followed on the trail of the deceased Prasen, he came to the spot were the corpses of Prasen and his horse still lay, along with pieces of teeth and nails of a lion. From there he followed the footsteps of the lion, which led him to the spot of the second struggle, where the corpse of the lion was lying. From there, he followed the tracks of a bear, which finally led him to the entrance of Jambavan’s cave, where the latter’s children were playing with the priceless jewel. Thereafter, he engaged in furious, protracted combat with Jambavantha for 28 days, and Jambavan gradually grew tired. As he was the strongest living entity at that time, he wondered who could be weakening him. It was then that Jambavan realized that he had been sparring with none other than Sri Krishna himself. Jambavantha, who was hot-headed but pious by nature, returned the jewel to Krishna, who later married Jambavati, Jambavantha’s daughter. 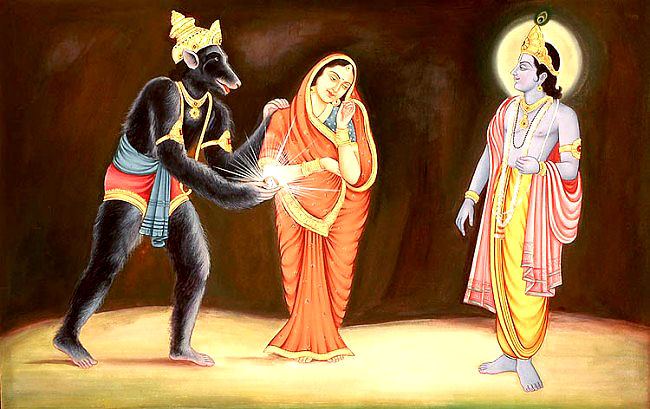 Later, Krishna narrated entire story of the Syamantaka jewel’s recovery, gave the jewel back to Satrajit.
For this, Satrajit gave his daughter Satyabhama along with Syamantaka Mani to Krishna.
After a few days, Krishna and Balarama were off to Hastinapura after there were rumours that the Pandavas have been burnt to their deaths in a fire. Kritavarma, Akrura and Satadhanwa, who had their eyes on the dazzling jewel, conspired to make use of Krishna’s absence from Dwaraka as an opportunity. Satadhanva one night entered the house of Satrajit and killed him in his sleep, making off with the jewel.

A sorrowful Satyabhama rushed to Hastinapura to inform Krishna about the ghastly death of her father. Krishna and Balarama immediately started for Dwaraka to avenge Satrajit’s death, hearing of which Satadhanwa fled on his horse, keeping the jewel with Akrura. He was chased down by Krishna and Balaram and finally killed by Krishna near Mithila. Later Krishna returned to Dwaraka, and upon realizing that Akrura had already fled to Kashi with the Syamantaka jewel, summoned him up, and asked him to admit his guilt. When Akrura complied, Krishna let him keep it, on the condition that it was to remain in the city of Dwaraka.

After few years, entire Yadava clan was wiped out due to an internal battle and Dwaraka got drowned into Arabian Sea after a Tsumani stuck on it, following deaths of Krishna and Balarama.
The whereabouts of Syamantaka Mani after this are not known.
Although Syamantaka Mani’s history too seems to suggest that it was a cursed diamond (a Ruby from Sun ?), there is no historic evidence to prove that Kohinoor might be a part of it.
The Koh-i-Noor, also does not match the superlative descriptions of the Syamantaka.