In 1405 a Chinese Muslim eunuch, Zheng He, launched the first of seven voyages west from China across the Indian Ocean. During the next 30 years (till 1445 CE), he was in command of the world’s largest fleet, funded by the Ming emperor, sailed to the east coast of Africa into the Persian Gulf.
This is known history. But the map titled “General chart of the integrated world”, shows that he travelled much further west and even reached America, 74 years ahead of Chistopher Columbus.
This is an 18th-century copy of a 1418 CE map which claims to show the world that Zheng He discovered. 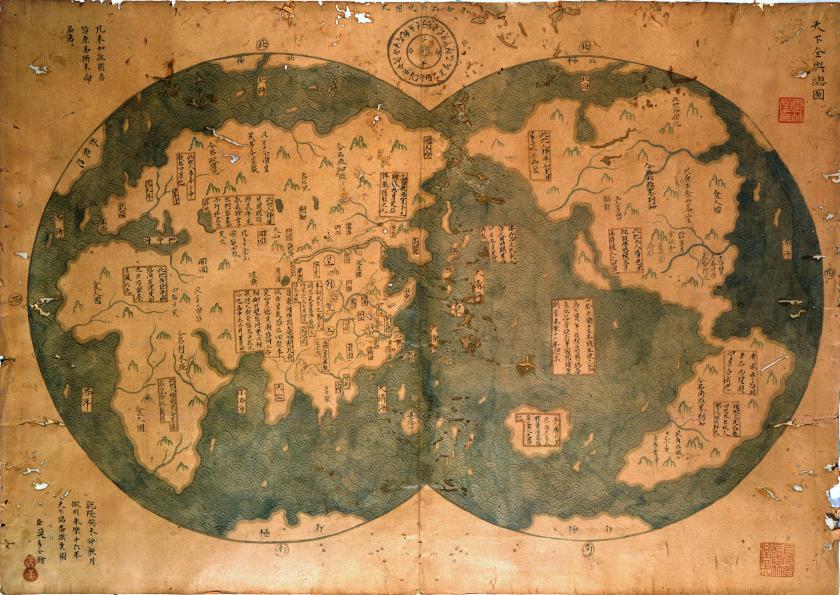 This map came to light in the year 2001 when a Shanghai lawyer, Liu Gang, claimed to have bought it from a local dealer for around $500. He believes that Zheng navigated the waters around both poles, the Americas, the Mediterranean and Australia too. In 2003 Gavin Menzies this map as evidence for his book “1421: the year China discovered the world”.
Map shows two hemispheres of the world, a convention for depicting the round Earth on flat paper. The contours of North and South America are clear, as are the rivers running from far inland. Arctic, Himalayas, among whose foothills Zheng He was born, are marked as the highest mountain range in the world.
Continents are recognisable. Some aspects are characteristically Chinese: the blue, fan-like waves are part of China’s cartographic tradition, as are the annotations with textual descriptions of places.

Europeans does not want to believe this map, as only their maps had such details.
It took european sailors many years to travel across the globe and make such maps, while Zheng He did it in 30 years.
Also, the Arctic appears first on a Ming Chinese map only in 1593 CE.
Though Columbus and Zheng He both sailed the seas, their purposes were quite different. Columbus’s mission was commercial, Zheng He’s diplomatic: he was sent to bring back envoys from other countries to pay homage to the new Yongle emperor, who had usurped power from his nephew and needed to find a way to assert his legitimacy.

With the end of Zheng He’s life, China’s explorations on the high seas finished too. By this time there was a new emperor with less need to finance pricey expeditions. For the next few hundred years China largely turned in on itself.
Europeans continues their expeditions and recorded their history, while chinese remained in their land.
But the fact that Indians were the first to land in Americas and develop a civilization there, was recorded in puranas, but neglected by historians.