The mystery of the Phaistos Disc (also spelled Phaestos Disc, is a disk of fired clay) is a story that sounds like something out of an Indiana Jones movie. 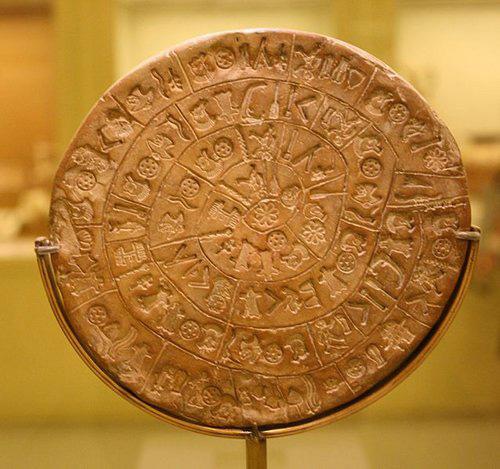 The disc was discovered in 1908, in the Minoan palace of Phaistos on the Greek island of Crete by the Italian archaeologist Luigi Pernier in the Minoan palace-site of Phaistos, and features 241 tokens, comprising 45 unique signs, which were apparently made by pressing hieroglyphic “seals” into a disc of soft clay, in a clockwise sequence spiraling toward the disc’s center.
It is believed that it was designed sometime in the second millennium BC ( possibly dating to the middle or late Minoan Bronze Age).

Some scholars believe that the hieroglyphs resemble symbols of Linear A and Linear B, scripts once used in ancient Crete. The only problem? Linear A also eludes decipherment.

The Phaistos Disc captured the imagination of amateur and professional archeologists, and many attempts have been made to decipher the code behind the disc’s signs. While it is not clear that it is a script, most attempted decipherments assume that it is; most additionally assume a syllabary, others an alphabet or logography. Attempts at decipherment are generally thought to be unlikely to succeed unless more examples of the signs are found, as it is generally agreed that there is not enough context available for a meaningful analysis.

The Phaistos Disc is generally accepted as authentic by archaeologists. The assumption of authenticity is based on the excavation records by Luigi Pernier. This assumption is supported by the later discovery of the Arkalochori Axe with similar but not identical glyphs.
The possibility that the disc is a 1908 forgery or hoax has been raised by two or three scholars.
According to a report in The Times the date of manufacture has never been established by thermoluminescence. In his 2008 review, Robinson does not endorse the forgery arguments but argues that “a thermoluminescence test for the Phaistos Disc is imperative. It will either confirm that new finds are worth hunting for, or it will stop scholars from wasting their effort.”

Yves Duhoux (1977) dates the disc to between 1850 BC and 1600 BC (MMIII) on the basis of Luigi Pernier’s report, which says that the Disc was in a Middle Minoan undisturbed context. Jeppesen (1963) dates it to after 1400 (LMII-III). Doubting the viability of Pernier’s report, Louis Godart (1990) resigns himself to admitting that archaeologically, the disc may be dated to anywhere in Middle or Late Minoan times (MMI-LMIII, a period spanning most of the 2nd millennium BC).
J.Best (in Achterberg et al. 2004) suggests a date in the first half of the 14th century BC (LMIIIA) based on his dating of tablet PH 1

Signs
There are 241 tokens on the disc, comprising 45 unique signs. Many of these 45 signs represent easily identifiable every-day things. In addition to these, there is a small diagonal line that occurs underneath the final sign in a group a total of 18 times. The disc shows traces of corrections made by the scribe in several places. The 45 symbols were numbered by Arthur Evans from 01 to 45, and this numbering has become the conventional reference used by most researchers. Some symbols have been compared with Linear A characters by Nahm, Timm, and others. Other scholars (J. Best, S. Davis) have pointed to similar resemblances with the Anatolian hieroglyphs, or with Egyptian hieroglyphs (A. Cuny).

Today the disc remains one of the most famous puzzles of archaeology.