The Sri Yantra (“sacred instrument“) or Sri Chakra (“sacred wheel“) or Mahameru [3D] is a yantra (instrument or machine) formed by nine interlocking triangles that surround and radiate out from the central (bindu) point, the junction point between the physical universe and its unmanifest source. 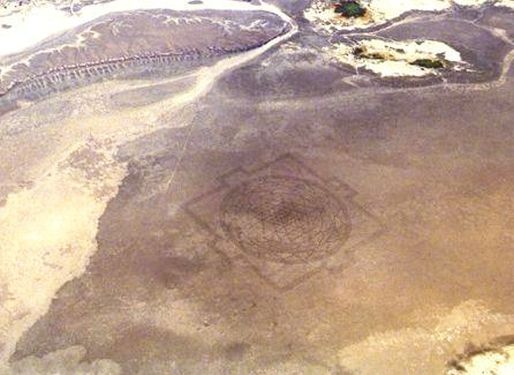 On August 10, 1990, Bill Miller, a pilot in the Idaho Air National Guard, noticed a huge etching on a dried-up lake-bed while flying over it, in Oregon State of the United States. The massive formation was a quarter of a mile in width and was etched 3 inches deep into the surface.
In his earlier round about 30 minutes before Miller first noticed the glyph, there had been no trace of this formation. Neither had any of the other pilots of the Idaho National Guard (who regularly train over this corridor), observed any unusual activity or a design-in-process in this area.
The etching simply appeared that morning. There was no possibility of any of the other pilots having missed such a prominent formation in process of being made. 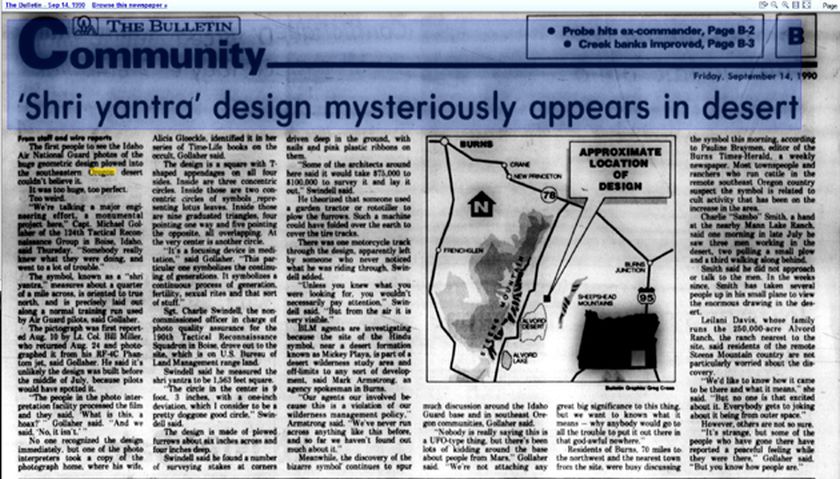 Lieutenant Bill Miller of the 190th Tactical Reconnaissance Squadron, immediately reported the details of what he had spotted to the authorities at the Air National Guard – a 13.3 mile glyph of lines about a quarter of a mile in width and length, on the extremely hard, sun-baked dry bed of a lake in Mickey Basin located southeast of Steens Mountains in the Alvord Desert, 70 miles away from the city of Burns in Oregon.

The formation detected on the morning of August 10, 1990 was oriented precisely in the North-South direction. The glyph had a machine like precision in its shape and clarity of lines.
After Bill Miller reported the observation, the news was concealed from the public by the authorities for thirty days.

The news hit the media in the United States on 12th September, 1990 when Boise TV station first aired the story. As soon as the story was aired, the glyph was quickly identified as the ancient Hindu meditation device- the Sri Yantra- identical in shape and proportion, and in its geometrical properties. No one had a theory why a pictograph of a complex Hindu meditation yantra should appear in the wilderness of Oregon. The story caught the attention of the media and the viewers alike.

By September 14th, the story was picked up by the Associated Press, Bend Bulletin and the Oregonian. The Oregonian reported that some architects that had been contacted by the newspaper, had said that the cost of conducting a land survey alone, before such a project could be initiated, would range from 75,000 to 100,000 dollars. The Sri Yantra design has a degree of complexity and a level of symmetry that makes it difficult to recreate its design even on paper, let alone furrow an enormous replication of it on a dry lake-bed. There was therefore a good deal of speculation that the glyph was not man-made.

There were other reasons too to support this theory – not the least important of them being the fact that, the shape produced by the lines in this massive Sri Yantra at Oregon, could not be deciphered while standing on the ground. In fact, the shape only made sense when viewed from a height of a few thousand feet above.

In Vedic texts, the Sri Yantra is defined as a device formed by nine interlocking triangles. Four triangles point upward (representing Shiva) overlapping with five downward-pointing triangles (representing Shakti). The triangles are placed in a circle surrounded by the two levels of lotus-petals, which in turn are surrounded by an outer circle and enclosed in a tantra design, serving as a protective cover. As the devotee enters into the Mandala, represented by the Sri Yantra, he leaves behind the worldly distractions and conflicts; and is transported into a world of symbols and visualizations.

The triangles surround and radiate out from a bindu point. The bindu represents the junction point between the physical universe and its un-manifest source. The nine triangles are interlaced in such a way so as to create forty three smaller triangles symbolic of the entire cosmos.

The Sri Yantra is variedly described as a visual representation of the sound ‘Om’ and an expression of the philosophy of ‘Advaita (one-ness or non-duality)‘. The Sri Yantra is popularly used today in India as a meditation device.

Two UFO Researchers, Don Newman and Alan Decker, visited the site on the morning of 15th September and reported that no trace of tire track markings or foot prints were visible anywhere close to the site even though their own station wagon had now left quarter inch deep marks into the hard crust of the surface along the track from where they had approached the formation.

Dr. James Deardorff, a Research Professor Emeritus at the Atmospheric Science Department of Oregon State University and a colleague of Don Newman and Alan Decker, compiled the details of their investigations and forwarded the story to UFO magazine, a British magazine devoted to the subject of unidentified flying objects (UFOs) and extraterrestrial life. The magazine had an international reputation for quality and authenticity and agreed to publish the story which appeared in Volume 6, # 3 in 1991 under the heading, ‘A Symbol on the Oregon Desert’.

Dr. Deardorff wrote in his investigative story that the government had not been able to give a reasonable explanation to the public as to how a glyph of such a large size had made an undetected appearance on a desolate site, which was constantly patrolled by the Idaho National Air Guard. About forty days after the appearance of the glyph, a group of four people, headed by a Bill Witherspoon, claimed that they had etched out the pictograph, over a period of 10 days, by pulling a garden cultivator like a plow over the lakebed. Mr. Witherspoon said that he had used ropes to ensure that the lines were straight and the angles perfect. Dr. Deardorff countered by saying that the story was concocted, and that it was sponsored by the government in its effort to quell the public furor. In all fairness to the government authorities though, it might be added here, that the government was probably acting in what it considers is in the best interest of the general public. The authorities did not want to fuel the belief that the glyph had an unexplained origin.

Bill Witherspoon was interviewed by newspapers to judge the authenticity of his story. Very quickly it became evident that his explanations lacked credibility. The most unconvincing part of his story was his claim that a garden plow, a rope and a blueprint of the formation were enough equipment to furrow out the glyph effortlessly. Bill Witherspoon’s electronic interview revealed other incongruities. For one, he had stated in the newspapers that he and his team had carried their tools for three quarters of a mile to the formation site everyday for 10 days, however in his video interview he said that he and his team had camped out two miles away from the site.

Bill Witherspoon’s team only managed to gouge out a ½ inch deep line with great exertion when they were asked to demonstrate how they had gouged out 13.3 miles of lines, 3 inches deep and 10 inches wide. The line lacked neatness, and, the displaced soil fell unevenly on the two sides of the carved line. No one believed anymore that the original glyph could have been created by using crude tools such as garden plows.