Apedemak or Apademak was a lion-headed warrior god worshiped by people in Egypt and Sudan in Africa. These people were inhabitants of Nubia region (along Nile river), Many Meroitic temples were dedicated to this lion headed deity from the Butana region: Naqa, Meroe, and Musawwarat es-Sufra.

In the temple of Naqa built by the rulers of Meroe, Apedemak is depicted as a 3 headed leonine god with 4 arms, and also as a snake with a lion head.
However, he is usually depicted as a man with a lion head.
Kushites believed that Apedemak brought victories to their armies by defeating their enemies. Whenever Kushite pharaohs carried military campaigns, they often claimed the support and companionship of Apedemak.
Musawwarat es-Sufra (Arabic:المصورات الصفراء al-Musawwarāt as-sufrā, Meroitic: Aborepi, Old Egyptian: jbrp, jpbr-ˁnḫ), is a large temple complex in Sudan, dating back to the 3rd century BCE.
It covers approximately 45,000 square metres and is the biggest in ancient sudan structures.
At least four Kushite queens or Kandakes — Amanirenas, Manaishakhete, Naldamak and Amanitore — probably spent part of their lives in Musawwarat es-Sufra.
The remains of a temple of Apedemak are about 600 meters away from the Great Enclosure, which is the main structure.
The maze of courtyards includes three (possible) temples, passages, low walls, about 20 columns, ramps and two reservoirs. 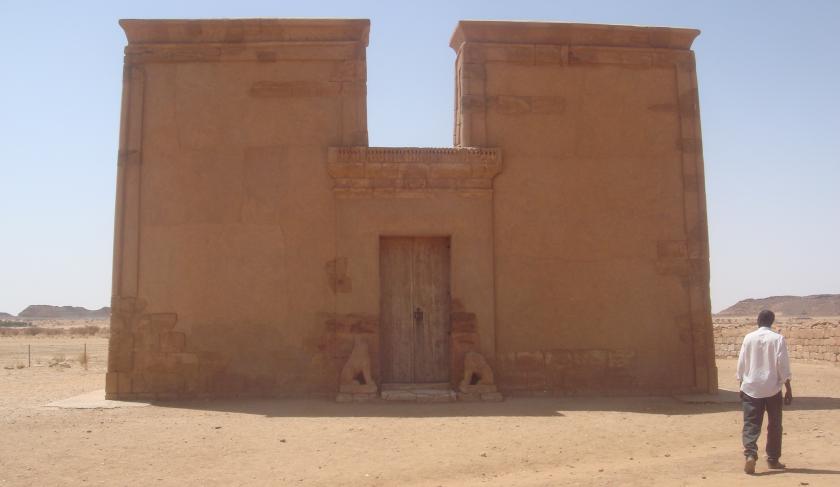 Hieroglyphic inscriptions revealed Arnekhamani (c.235-c.218 BCE) was the King who had commissioned the building of Lion Temple, which he dedicated to the lion-headed Meroitic god, Apedemak – responsible both for creation and war.

Lion headed God Carvings on the interior of the Temple : 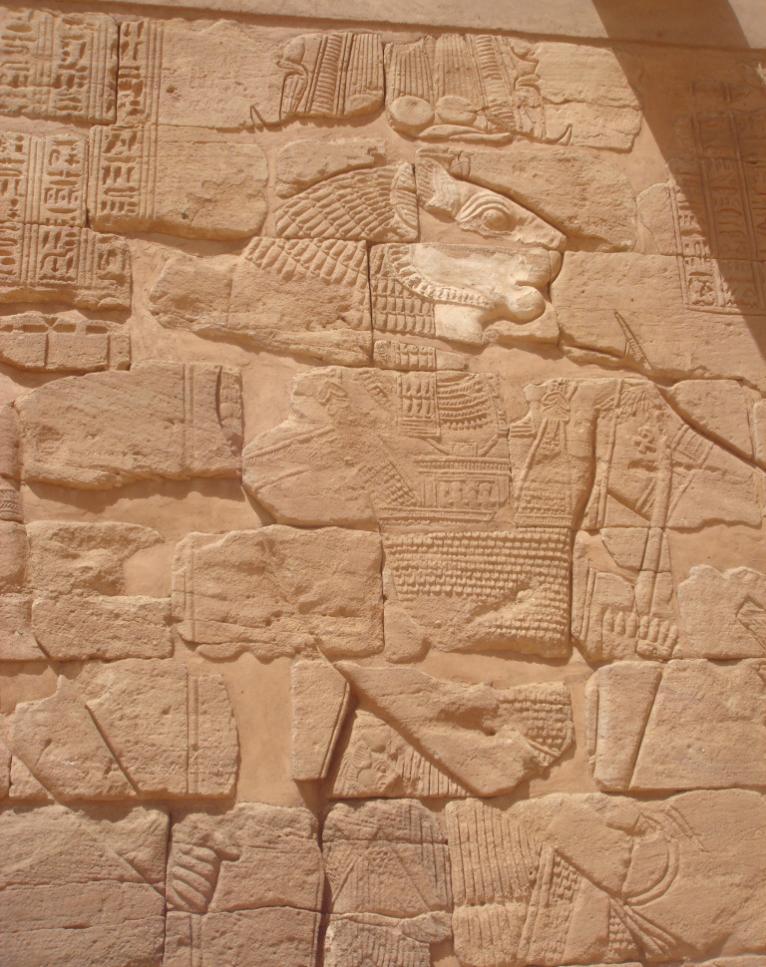 If we observe closely, we can see that a human is being taken out by a lion in this carving (similar to Narasimha killing Hiranyakasipu) : 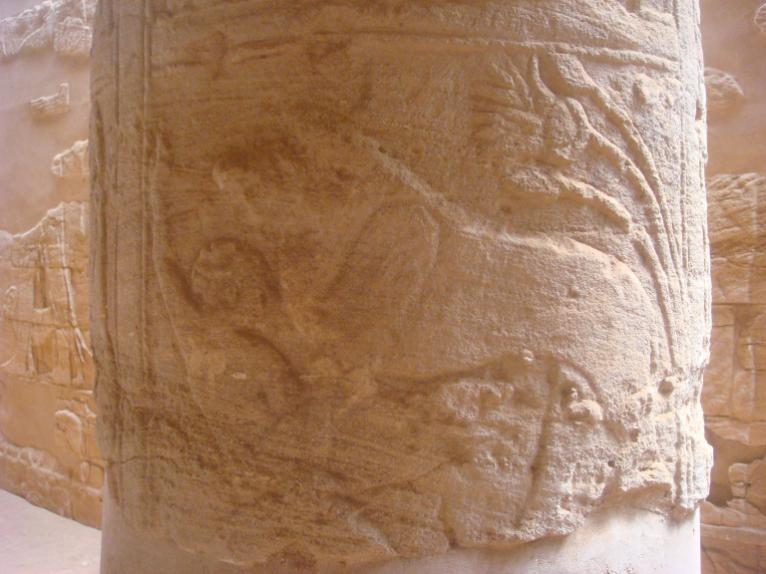 On a votive tablet found at Musawwarat es Sofra, King Tañyidamani expresses his gratification for the divine support of Apedemak. A translation of the tablet text, reads as follows:

In one carving, Apedemak is shown as a Lion with wings of a Falcon, which is similar to Lord Narasimha with Garuda. 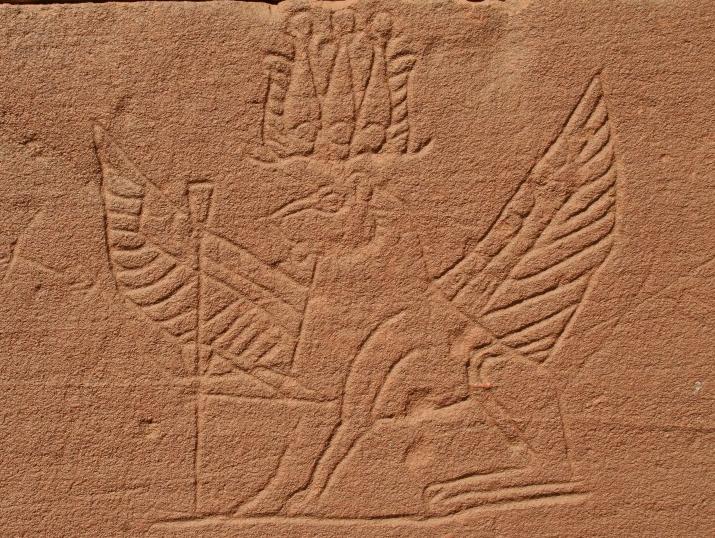 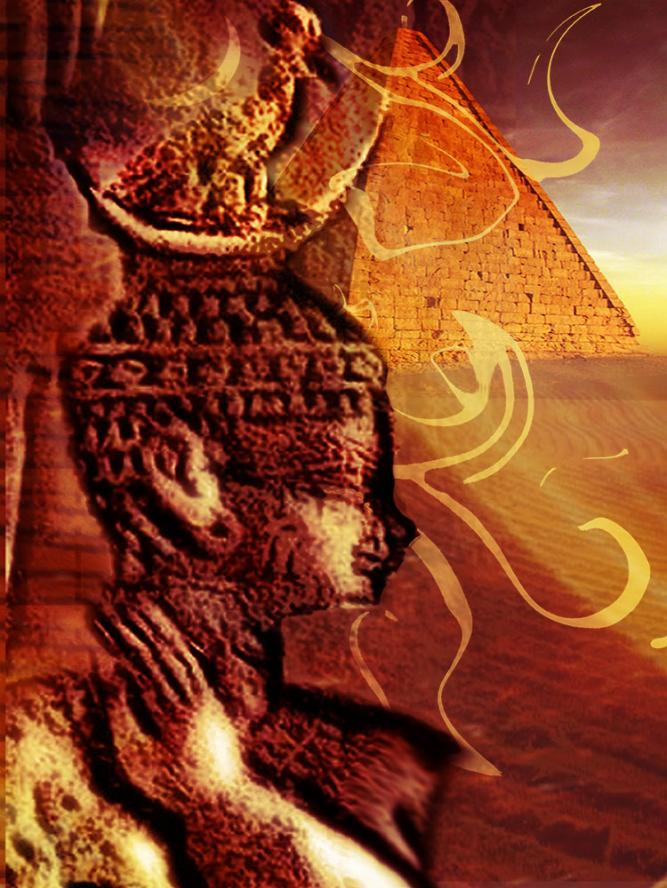 Amesemi, the goddess wearing a crown/shaped like a falcon or moon and is Goddess of Protection. She is wife of Apedemak. In few carvings, she is seen along with Apedemak and their son Horus.
At Naqa, the walls are decorated with images of the Lion God with other Egyptian deities, at one point even forming a triad with Isis as Apdemakak’s consort and Horus as their son. At the Lion Temple itself there is an interesting image of Apedemak with Queen Amanitore, her husband Natakamani, and their son, making offerings to Apedemak.

It seems that Apedemak was not alone amongst lion headed deities. Maahes (Ma’amhes) is another lion headed deity, although from Egypt. In the past, both Maahes and Apedemak have been confused with one another. 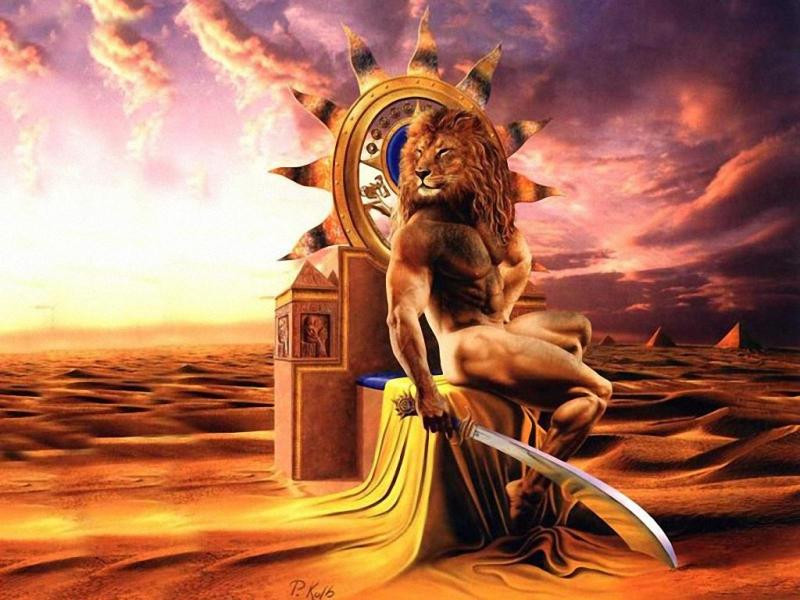 His name is “He who is true beside her,” and he was the son of the god Ptah and the goddess Sekhmet, a lioness-headed deity.

Few pictures represent the wrestle fight between Apedemak and a King, which appears similar to Lord Narasimha attacking Hiranyakasipu and killing him. 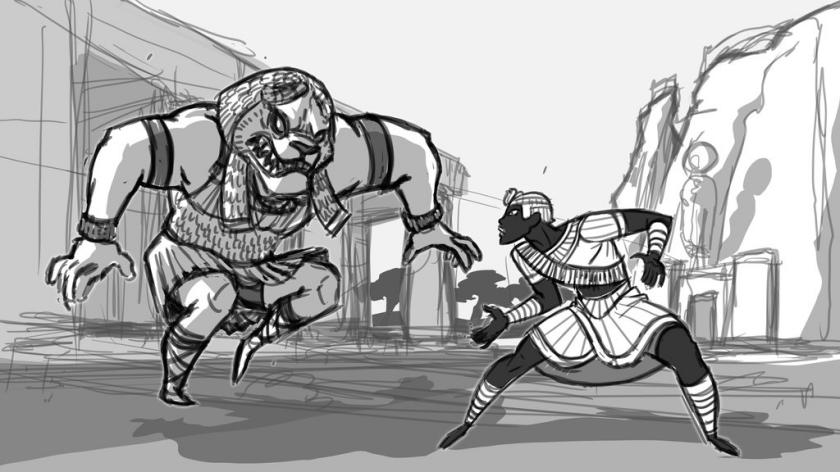 Lion God across many religions and civilizations in the world

Vedas made it clear that God manifests as time and lets us experience karma based on events.
Across many religions, time (Kaal) is represented by some form of god (for example : Kaalabhairava, Vishnu/Krishna etc).
He was the Deliverer of the Jews and Mixed-Multitude in their Biblical Exodus from slavery in Egypt. KRISHNA – VISHNU / NARA-HARI Leontocephalos Lion-Headed TIME / KALAH of the Bhagavad-Gita, as the Biblical YAHU-TZABAOTH and Zeus-Jupiter Chronos-Saturus, Egyptian HERU-AUSU-Ammon-RA, Kushite Apademak, Saivite and Buddhist KalaBhairava, Mithraic Zervan, etc. HE, ARYEH / HARYAH is the “Lion of Judah”, NARA-HARI, the Biblical Exodus Deliverer and Protector of the Jews.

Some Scholars of Zurvanism and Comparative Religions are well acquainted with the Form of the Supreme God as Leontopcephalos (Lion Headed) Time, surrounded by His Alter-Form or Expansion as the Ouroboros Serpent of Infinity. What they do not realize is that this Form of the Supreme Lord is both the Jews’ and Christians’ ARI-YAHU or ARI-EL YAHU-TZABAOTH (Lion-Headed Time) ‘Lord of Hosts’ of the Exodus Story, AND Krishna-Vishnu’s Central Bhagavad-gita Theophany as Narasimha KALAH / TIME, surrounded by His Alter-Form, Eternity as An-anta Un-Ending Sesha (Remainer) Naga (Biblical NACHASH).

To the ancient Africans, He was the Lion Headed AMUN (Zeus-Jupiter Chronos-Saturnus) the Supreme Lord of Egypt, Meroe and Sub Saharan Africa.

To the ancient Persians He was the Supreme Lord Zurvan.

To the ancient pre-Buddhist Tibetans He was the Lion-Headed Protector ZA.

To the ancient Eurpeans He was Zeus Chronos and Jupiter Saturnus etc.

Saivites identify the Central Theophany of KALAH in the Gita with Siva, because KALAH is one of Siva’s Names and Forms.

The Island Civilizations of Austro-Indonesia and the Pacific also worship the Lord as Lion-Headed Time. His New Year Lion Dance Blessing Festivals can still be seen there.

In the Western Hemisphere the Lion Headed JAG-WERE GOD of the earliest OLMECS ruled the TIME WHEEL of all of the subsequent Amer-Indian Civilizations.

Among the Names and Forms of Hari (Krishna) or Vasudeva (Vishnu) as the Man-Lion Nara Hari (Nara-Simha) are the Names and Forms of Kalah-Shiva!!! In Gita Jayanti and Buddhist New Year’s Festivals throughout the East, the All-devouring Universal Revelation / Theophany of the Supreme Lord as TIME / KALAH (BAIRAVA) is represented in a MAN-LION FORM. Thus Sacred Traditions from around the World, which are thousands of years old, confirm that ancient humanity worshiped the Supreme Lord in His Gita-related Revelation as Lion-Headed Time, with His Alter-Form of the Sarpa / Serpentine Anantadeva as Un-Ending Eternity.

Thus from Africa to Japan and the Isles of Oceana and the Western Hemisphere the ancients worshiped This Form of the Supreme Lord OLU / HERU / HELI / SOLE / ELI / ALI / ARI / ILU / HVARE / ZURVAN / SURA / HARI / HARA / etc. He was the Supreme Protector of Dharma and the Patron Lord of all Dharma Protectors, devoted / consecrated kshatriyas and RAJA / REX / REGENT / RAZAN (Biblical Hebrew, Jewish) DHARMA-RAJAS. Thus His ‘Lion Throne (Simhasana)’ became the symbol of His anointed RAJA, RAYA / ROYAL RULER.