Inti Raymi (‘Festival of the Sun‘) used to be a religious ceremony of the Inca Empire in honor of the god Inti (Sun), one of the most venerated deities in Inca religion.
It was the celebration of the Winter Solstice – the shortest day of the year in terms of the time between sunrise and sunset and the Inca New Year. In territories south of the equator the gregorian months of June and July are winter months. 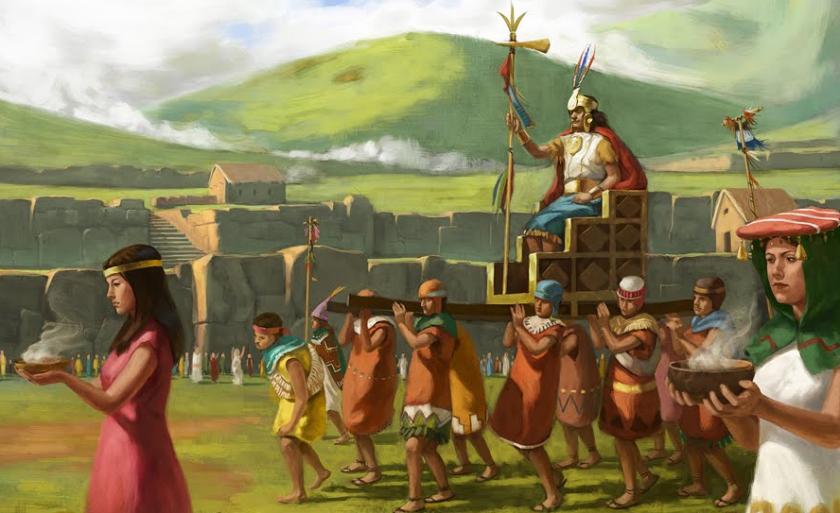 During the Inca Empire, the Inti Raymi was the most important of four ceremonies celebrated in Cusco, as related by Inca Garcilaso de la Vega. The celebration took place in the Haukaypata or the main plaza in the city.

According to chronicler Garcilaso de la Vega, Sapa Inca Pachacuti created the Inti Raymi to celebrate the new year in the Andes of the Southern Hemisphere. The ceremony was also said to indicate the mythical origin of the Incas. It lasted for nine days and was filled with colorful dances and processions, as well as animal sacrifices to thank Pachamama and to ensure a good cropping season.The first Inti Raymi was in 1412. The last Inti Raymi with the Inca Emperor’s presence was carried out in 1535, after which the Spanish and the Catholic priests banned it.

Inca must have been distorted version of ‘Ina Kula‘ (Dynasty of King Rama).
The Maya Astec and the Incas also used it as a sign of royalty. Frescoes of Chak Multum in Yucatan show two types of parasols both of which correspond to types still in use in South-East Asia.’
Incas celebrated it as “Inti Raymi”
This was celebrated around 24 June.
There are theories that this date could have been April 14 or thereabouts,allowing for the Latitude and Longitude differences between India and Peru Columbia.
They called Sun as Inti.

In 1944, a historical reconstruction of the Inti Raymi was directed by Faustino Espinoza Navarro and indigenous actors. The first reconstruction was largely based on the chronicles of Garcilaso de la Vega and only referred to the religious ceremony. Since 1944, a theatrical representation of the Inti Raymi has been taking place at Sacsayhuamán, two kilometers from its original celebration in central Cusco) on June 24 of each year, attracting thousands of tourists and local visitors.

Inti Raymi is still celebrated in indigenous cultures throughout the Andes. Celebrations involve music, colorful costumes (most notable the woven aya huma mask) and the sharing of food. In many parts of the Andes though, this celebration has been connected to the western festivals of Saint John the Baptist, which falls on the day after the northern solstice (June 21).

Indira is the name of the God Thunder and Chief of Angels in Hinduism.

The Festival also resembles the Indira Vizha performed during the Tamil Classical period.

Indra is written as Inthiran In Tamil.
The Hindu Almanac for Calculation is called Panchanga.
Sundial used by the Inca is called Pacha Unachaq.

Their system of Governance, at the grass root level, resembles the Kudavolai System by the Tamils, as revealed by Rajarja Cholan epigraph at Tirukkoilyur.

In reading descriptions of the palace and court of the Astec emperors of Mexico, any one familiar with South-East Asia cannot fail to be reminded of the courts of Burma, Siam and Cambodia. The same applied to the form of government. Thus the institution of four chief officials in Mexico and Peru corresponds to the four ministers of state and Governors of the four quarters of the Kingdom in Hindu Buddist empires of South-East Asia. In both cases this institution is based on cosmological principles. This indicates similar pictorial story of the Hindu Buddist origins in the field of art, religious architecture, government, kingship, cosmology and mythology proves close cultural contacts between ancient India and countries of South-East Asia with the countries of Central and South America. Dr. Robert Gelern and Dr. Ekholm have come to the following conclusion:

The large number of highly specific correspondences in so many fields precludes any reponsibility of mere accidental coincidence nor would it help us to take refuge in any kind of explanation based on some alleged psychological laws. There is no psychologial law which could have caused the peoples on both sides of the Pacific to stylize the lotus plant in the same manner and to make it surge from the mouth of a jawless demon’s head, to invent the parasol and use it as a sign of rank and to invent the same complicated game (Pachisi). There is no explanation other than the assumption of cultural relationship. We must bow to the evidence of facts even tough this may mean a completely new start in our appraisal of the origin and development of the American Indian higher civilizations.