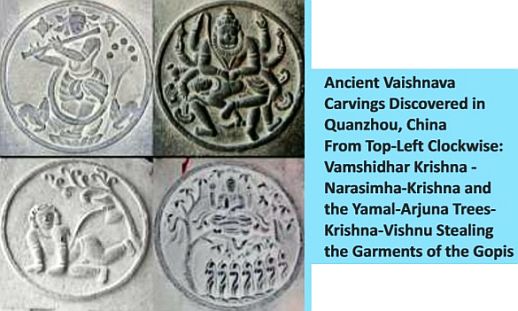 Apart from Saivism, Vaishnavism was also followed by people on ancient China.
Mahabharata (composed around 3100 BCE) makes a reference to presents brought by the Chinese to the Rajasuya Yajna performed by the Pandavas.
In the Vana Parva of the Mahabharata it is stated that the Pandava brothers crossed the country of the Cinas (China) during their trek through the Himalayan territory north of Badrinath.
They are said to have reached the realm of the Kirata King Subahu. Also in the Mahabharata the Cinas (Chinese), with the Kiratas, are found among the armies of King Bhagadatta of Pragjyotisa, India’s modern Assam region.
In the Sabha Parva this king is described as surrounded by the Kiratas and the Cinas.
The name China and the Chinese were after the Chins of India and proves the Indian origin of the name of China.

In the Bhisma Parva of the Mahabharata, the corps of Bhagadatta, consisting of the Kiratas and the Cinas of yellow color, are said to ‘look like a forest of Karnikaras‘.
In the Artha Sastra(Book on Economics written in 3rd century BCE) of Chanakya, China is mentioned as well. It is theorized that the name China is based upon the name of the kingdom, Ch’in, which was established by Shih Huang Ti in the year 221 BCE, but the word and race of Chin was mentioned in Mahabharata much earlier.

Magadha was known to the Chinese by the name Mo-kiato, and its capital was recognized by both its Hindu name Kusumpura, for which the Chinese wrote Kia-so-mo-pon-lo and Pataliputra, out of which they made Patoli-tse by translating putra, which means son in Sanskrit, into their own corresponding word, tse.
Such translation of names has thrown a veil of obscurity over many a name of Hindu origin.
Hindu geography has suffered a great loss.
Another clear example of the impact of dialect upon a language in the Sanskrit word ‘Maṇḍala’. In Japan it becomes ‘Mandara’ but in China it is ‘Màntúluó’.

Both Buddhism and Hinduism were patronized by the Chinese rulers. In the 6th century AD, the Chinese royal family was Hindu for two generations. The following Tang dynasty (7th to the 9th century A.D.) also patronized both Hinduism and Buddhism because the latter was but a branch of Hinduism. 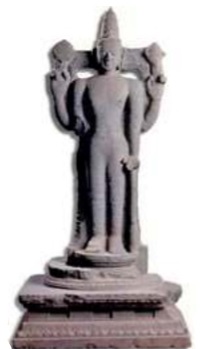 Chinese Creation ‘Myth’ involves a ‘Boy of the White Crane‘. He is said to live in the palace of ‘jade emptiness’.
This is believed to represent the ‘Primeval Ocean’ and Lord Brahma who rides a white swan and is born from the navel of Lord Vishnu as he rest in the Primeval Ocean.
Also the “Supreme God in Chinese popular religion” is called ‘Yù-huáng[-dà]-dì’, which translates as “JadeEmperor-Big-Supreme Being“.
Thus we find that, like Quetza-lcoatl, the Supreme Being of the Mayans and
Aztecs, Lord Vishnu, the Supreme Being within the Vedic tradition, the Chinese Supreme Being Yu-Huang di is green as well.
Since this ‘Jade-Green’ is considered to be seacolored green we see yet another Supreme Being connected with the color of water which iconically means the color blue.

The presence of carvings depicting Krishna’s activities as a child in Vrindavan is quite remarkable. Despite theories that present the evidence of Chinese Vedic
culture as a mere offshoot of the Tamil merchant community, the presence of carvings based on Krishna’s Vrindavan pastimes suggest much more.
The fact is just as Buddhism was adopted and practiced by billions of non-Indians it is highly probable that Vedic culture was just as prevalent.

Chinese Taoism has something in common with Saktism in Vedic tradition.
One text in which the Tung Hsuan Section of the Tao Tsung (Taoist Canon) originated goes by the name Lin PaoChing (Book of the Marvelous Jewel).
Here we can find the influence of Brahmanism and Upanishad (Vedanta) in particular. It has a portrait of Yuan Shih TienTsun (the Highest God of Taoism) based on the portrait of the Maha Brahma of Brahmanism at the numerous kalpas in the unlimited darkness of Chaos.
Thus, He transforms himself into thirty-three devas, asuras, Ten directions of the Universe etc.
Among many other rare insights into Chinese Hinduism, the Monkey King, Sun Wukong, is indeed Hanuman.

Today’s India is still called Bharat but it only represents an extremely truncated Bharat.
True Bharat is the entire world and this Vedic culture is the entire humanity’s heritage.