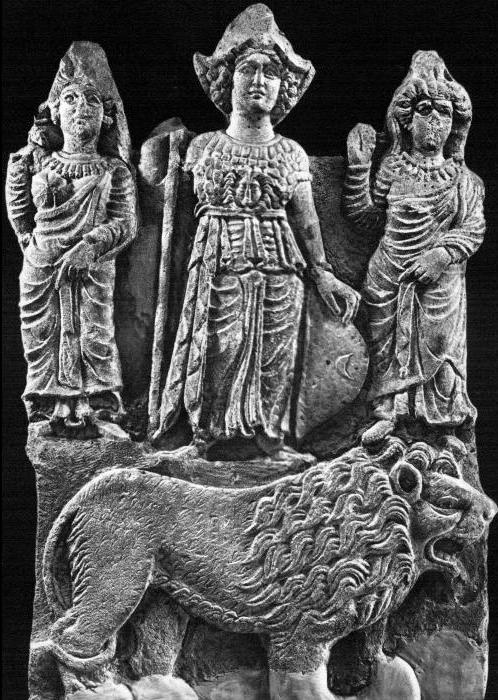 In the Qur’an, Al-Lat is mentioned along with al-‘Uzzá and Manāt in Sura 53:19–23.
The tribe of ʿād of Iram of the Pillars is also mentioned in Sura 89:5–8, and archaeological evidence from Iram shows copious inscriptions devoted to her for the protection of a tribe by that name.
Al-lāt is also explicitly attested from early Islamic records discussing the pre-Islamic period. According to the Book of Idols (Kitāb al-ʾAṣnām) by Hishām ibn al-Kalbi, the pre-Islamic Arabs believed Al-lāt resided in the Kaʿbah and also had an idol inside the sanctuary.

Al-‘Uzzá was also worshipped by the Nabataeans, who equated her with the Greek goddess Aphrodite Ourania (Roman Venus Caelestis).
A stone cube at aṭ-Ṭā’if (near Mecca) was held sacred as part of her cult.
She is mentioned in the Qur’an Sura 53:19 as being one of the goddesses that people worshiped.
The temple dedicated to al-‘Uzzá and the statue itself was destroyed by Khalid ibn al Walid in Nakhla in 630 AD.

Shortly after the Conquest of Mecca, Muhammad began aiming at eliminating the last idols reminiscent of pre-Islamic practices.

He sent Khalid ibn Al-Walid during Ramadan 630 AD (8 AH) to a place called Nakhlah, where the goddess al-‘Uzzá was worshipped by the tribes of Quraish and Kinanah. The shrine’s custodians were from Banu Shaiban. Al-‘Uzzá was considered the most important goddess in the region.

Khalid set out with 30 horsemen to destroy the shrine. It appears that there were two idols of al-‘Uzzá, one real and one fake. Khalid first located the fake and destroyed it, then returned to the Prophet to report that he had fulfilled his mission. “Did you see anything unusual?” asked the Prophet.
“No,” replied Khalid.
“Then you have not destroyed al-‘Uzzá,” said the Prophet. “Go again.”

Angry at the mistake that he had made, Khalid once again rode to Nakhla, and this time he found the real temple of al-‘Uzzá.
The custodian of the temple of al-‘Uzzá had fled for his life, but before forsaking his goddess he had hung a sword around her neck in the hope that she might be able to defend herself.
As Khalid entered the temple, he was faced by an unusual naked dark woman who stood in his way and wailed. Khalid did not stop to decide whether this woman might be there to seduce him or to protect the idol, so he drew his sword in the name of Allah and with one powerful stroke the woman was cut in two. He then smashed the idol, and returning to Mecca, gave the Prophet an account of what he had seen and done.
Then the Prophet said, “Yes, that was al-‘Uzzá; and never again shall she be worshipped in your land.”

The pre-Islamic Arabs believed Manāt to be the goddess of fate.
She was known by the cognate name Manawat to the Nabataeans of Petra, who equated her with the Graeco-Roman goddess Nemesis, and she was considered the wife of Hubal.
“The most ancient of all these idols was Manāt. The Arabs used to name their children ‘Abd-Manāt and Zayd-Manāt. Manāt was erected on the seashore in the vicinity of al-Mushallal in Qudayd, between Medina and Mecca. All the Arabs used to venerate her and sacrifice before her. The Aws and the Khazraj, as well as the inhabitants of Medina and Mecca and their vicinities, used to venerate Manāt, sacrifice before her, and bring unto her their offerings… The Aws and the Khazraj, as well as those Arabs among the people of Yathrib and other places who took to their way of life, were wont to go on pilgrimage and observe the vigil at all the appointed places, but not shave their heads. At the end of the pilgrimage, however, when they were about to return home, they would set out to the place where Manāt stood, shave their heads, and stay there a while. They did not consider their pilgrimage completed until they visited Manāt.” — Book of Idols, pp 12–14 .

The temple of Manat was raided and the idol was destroyed on the orders of Muhammad, in the Raid of Sa’d ibn Zaid al-Ashhali, in January 630 AD (8AH, 9th month, of the Islamic Calendar), in the vicinity of al-Mushallal.

Some scholars have enumerated that Somnath Temple in India was attacked later by Muhammad Ghazni for an idol of Manat that had been secretly transferred to the said temple.

These three Pre Islamic Goddesses look similar to Vedic Goddesses Lakshmi, Parvati, Saraswati.
A triple deity (sometimes referred to as threefold, tripled, triplicate, tripartite, triune or triadic, or as a trinity) is a deity associated with the number three.
Such deities are common throughout world mythology; the number three has a long history of mythical associations.
The Triple Goddess has been adopted by many neopagans as one of their primary deities.
In common Neopagan usage the three female figures are frequently described as the Maiden, the Mother, and the Crone, each of which symbolizes both a separate stage in the female life cycle and a phase of the Moon, and often rules one of the realms of earth, underworld, and the heavens.
These may or may not be perceived as aspects of a greater single divinity.
The Goddess of Wicca’s duotheistic theology is generally portrayed as the Triple Goddess of the Moon, her masculine consort being the Horned God.