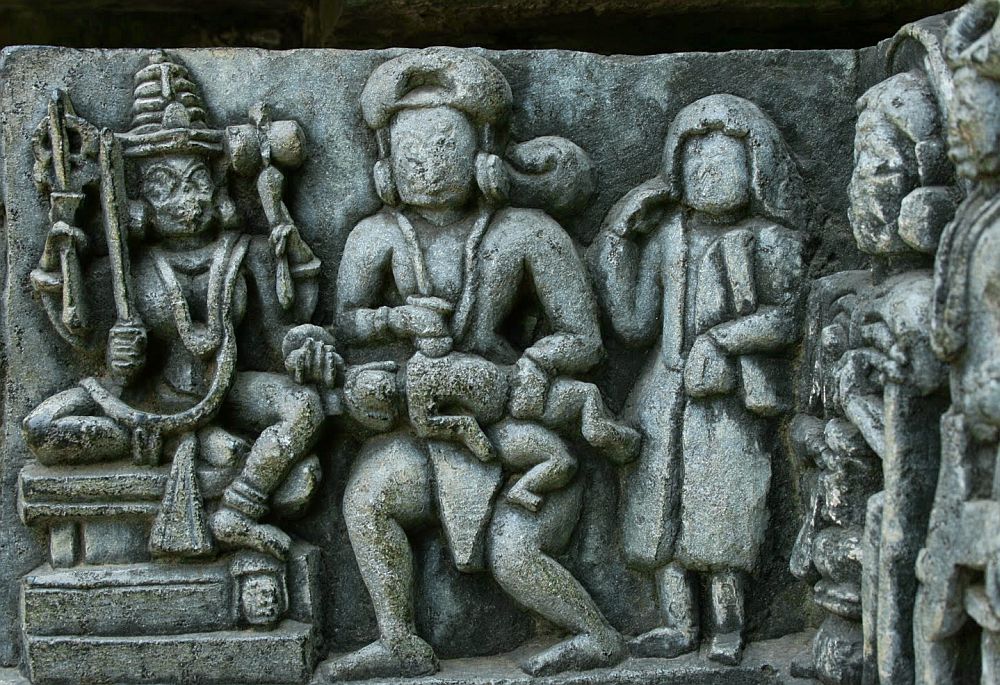 Child sacrifices were done by Canaanites in those era, and the goddess’s picture above looks similar to a vedic god carrying weapons in four hands and suppressing a head under her feet.
In tantric tradition, Goddess Kaali is shown with four hands carring weapons, wearing garland of skulls around her neck and suppressing a male head below her feet.
An under-world diety, worshipped by the Phoenicians and Canaanites, and had associations with a particular kind of propitiatory child sacrifice by parents.

Canaanite goddess Astarte is shown on a seat and has her feet on the ground. She holds two snakes aloft over the heads of two horses. Below her feet are skulls, similar to Kaali.
Her name is the second name in an energy chant sometimes used in Wicca: “Isis, Astarte, Diana, Hecate, Demeter, Kali, Inanna.”
We can notice the statue of Athirat of left, with a vedic tilak in center of her forehead.

See the above Ereshkigal or Ishtar statue which is 3200 years old. She is the Assyrian and Babylonian goddess of fertility, love, war, and sex and is the counterpart to the Sumerian Inanna, and is the cognate for the Northwest Semitic Aramean goddess Astarte.
We can notice the eagle features, including sharp nose, wings on back, claws etc.
Vedic god or carrier bird of Lord Vishnu, Garuda is actually a powerful Eagle and has been represented in many puranas as a warrior who kills serpents and removes their venom.
There is an entire purana (Garuda Purana) dedicated to him, written as conversation between Garuda and Lord Vishnu about soul’s journey after death and before next birth.

Dagon, god of fish, god of crop fertility, father of Hadad is shown as part man-fish (like a Centaur) and this Fish-God adaptation looks to be from Lord Vishnu’s first avatar (Matsya-Avatar). 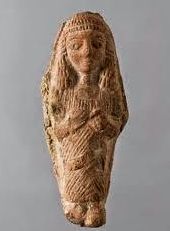 Canaanite Goddess of Fertility – Lachama has name similar to Goddess Lakshmi (लक्ष्मी), the goddess of wealth and prosperity in vedic tradition.
Near Zion (Jerusalem), Canaanites build a temple for Lachama thousands of years before hebrews arrived there.
The town of Beit Lachama (house of Lachama), became Bethlehem.
Lakshmi is referred to as Lachmi or Lachamma in local Indian languages of south.

Canaan is referred to in Amarna Letters as ‘Kinahhu‘, while other sources of the Egyptian New Kingdom mention numerous military campaigns conducted in a place called ‘Ka-na-na‘. All these ancient names are cognates to the name ‘Kanha’ (कान्हा), which is other name of Lord Krishna.
Jewish Encyclopedia, referring to the writing of Clearchus of Soli, who was the disciple of Aristotle and wrote extensively around 320 BCE on eastern cultures, states that Aristotle was of the view that the Hebrews were descendants of the Indian philosophers.

In his first book on Sleep he relates of Aristotle, his master, that he had a discourse with a Jew; and his own account was that what this Jew said merited admiration and showed philosophicalerudition. To speak of the race first, the man was a Jew by birth and came from Cœlesyria [Palestine]. These Jews are derived from the philosophers of India. In India the philosophers call themselves Kalani, and in Syria Jews, taking their name from the country they inhabit, which is Judea; the name of their capital is rather difficult to pronounce: they call it Jerusalem.
There are many traditions similar between Judaism and Hinduism, especially the marriage ceremony.
Pre Jewish Canaanite Religion is very much connected to and inspired from Vedic traditions.
Jews are called as Yoodu in ancient India and this word derived from Yadav, who were descendants of Lord Krishna and expectedly were cattle herdsmen (including Jesus Christ).
They must have slowly moved towards west after Krishna’s era ended and most Yadavs killed by fighting among themselves in 3102 BCE.