Ancient Hindu Priests of Gobekli Tepi are Yazidis who now live in and around Iraq.
The ISIS is hell bent on converting these Yazidis and when they resist, they are killing hundreds everyday and taking their women as sex slaves. 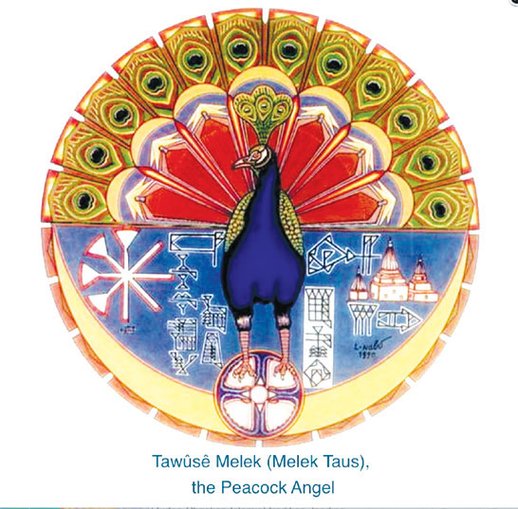 These Yazidis are monotheists, believing in God as creator of the world, which he has placed under the care of seven holy beings or angels, the chief of whom is Melek Taus, the Peacock Angel. The Peacock Angel, as world-ruler, causes both good and bad to befall individuals, and this ambivalent character is reflected in myths of his own temporary fall from God’s favour, before his remorseful tears extinguished the fires of his hellish prison and he was reconciled with God.

Their syncretic but ancient religion Yazidism (a kind of Yazdânism) is linked to Zoroastrianism and ancient Mesopotamian religions, however Yazidis form a distinct and independent religious community and have their own culture.
Persecution of Yazidis has continued in their home communities within the borders of modern Iraq, under fundamentalist Sunni Muslim revolutionaries.

Starting in August 2014, the Yazidis were targeted by the Islamic State of Iraq and the Levant in its campaign to “purify” Iraq and neighboring countries of non-Islamic influences.

Yazidis are made to forget their history and cultural roots.
Though they forgot, their emblem, Taus Melik tells the story.
Peacocks are not found in any middle-east country. They are found in India.
Also, Yazidis use oil lamps with Peacocks on top, which is a custom in India. 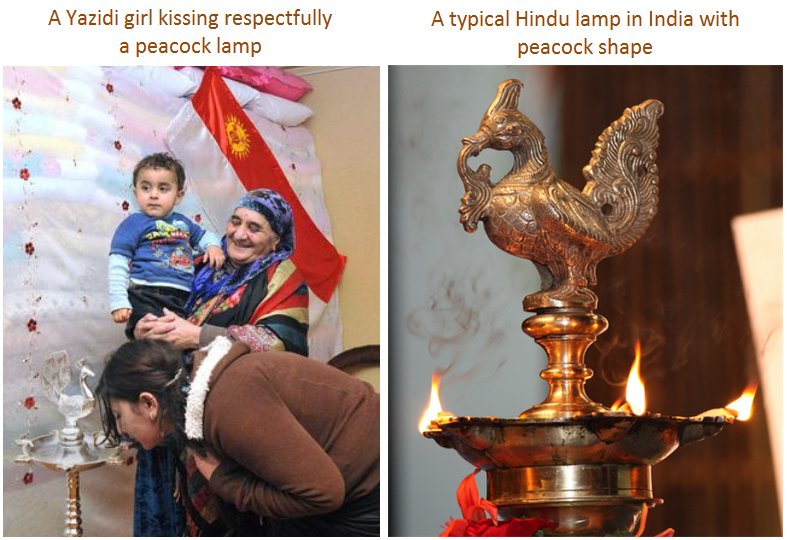 Yazidis symbol is a wing spread peacock, just like Hindu god Siva’s son, Subrahmanya’s mount. The most important point to note is that peacock, the national bird of India, is a native of south and south east Asia or Africa. Not found in the area of Iraq or Middle-East. 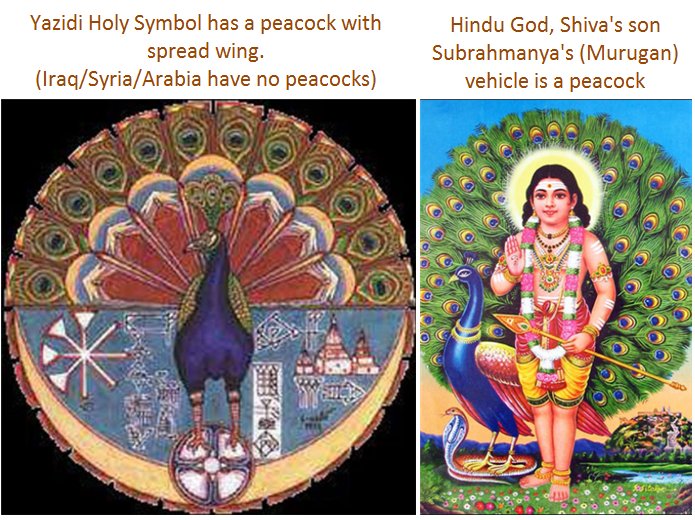 Yazidi temple at Lalish has snake symbol at the entrance. You will not find this among other tribes of Arabia or Mesopotamia.
For Hindus, Subrahmanya is the other avatar of snakes and worshiped very closely for all snake related pujas like Naga Panchami. 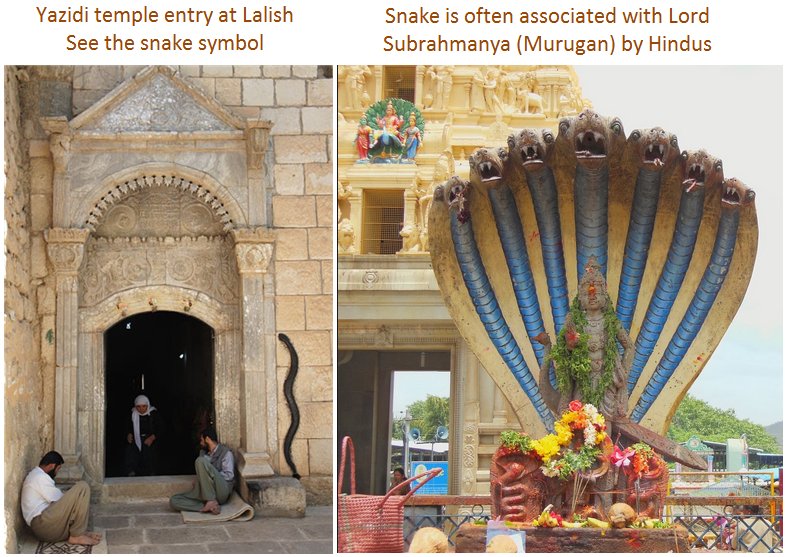 There are multiple other similarities between Yazidis of Iraq and Vedic Religion followers like : 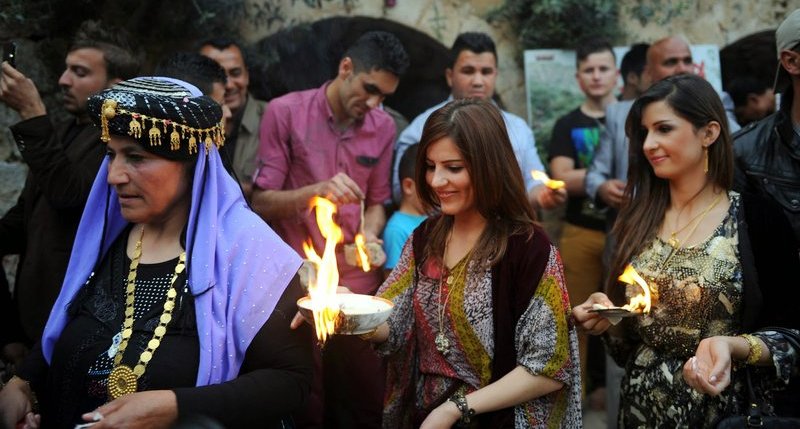 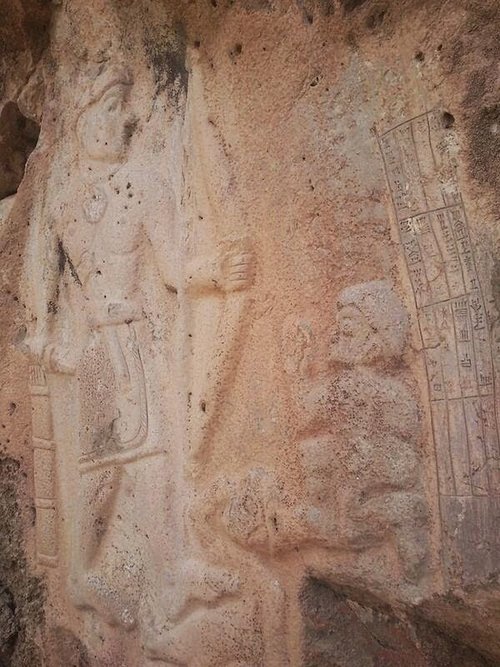 According to the Yezidi calendar, it is currently the year 6,764 (which must be number of years they came away from India and started living seperately).
Scholars of religion concede that the Yezidi faith has absorbed and preserved many elements from ancient faiths including Sanatana Dharma, Mithraism, and Zoroastrianism, as well as the influence of Sufis or Islamic mystics—all targets of hardline ISIS fundamentalism.

The festival Skanda Shashti or Subrahmanya Shashti happens to be on same day of Sabbath day of Yazidis.

Today, Yazidi population all over the planet is less than 0.9 millions.
25 million Yazidis were killed over past 800 years as they were assumed to be SHAITAN/SATAN(pagan) worshippers.
While PaLani (Pazhani) is where Lord Murugan’s temple is placed in Tamil Nadu, the Yazidis call in Perani.
Yazidis beat the dholak , blow the Conch (shank) , take holy river baths and revere the peacock (Taus Melik).
The Yazidis were the Hindu brahmin priests at Gobleki Tepi, one of the ancient stonehenges .
All Stonehenges on this planet are Hindu in origin, used for Agnihotra Havanams.

Below is a painting of an Indian woman in Saree, lighting up a Peacock Lamp, found on wall of a hidden temple in Iraq with 2 Yazidi children in front of it.