The picture below is taken from a Sumerian cylinder seal cleary shows that they knew Saturn had rings around it.
The Sumerian civilization emerged upon the flood plain of the lower reaches of the Tigris and Euphrates Rivers about 4000 B.C.
The social structure of the Sumerians was decidedly different from other societies of that and later times.
The Sumerian communities were city states organized around a temple and ruled by a priesthood. The bulk of the people of the community were considered to be the servant-slaves of the god of the temple.

The insecurities of life justified the role of the priesthood. When calamities occured despite the best efforts of the priesthood this was explained as being the result of the actions of other gods acting in concert which over-ruled the wishes of the local god. 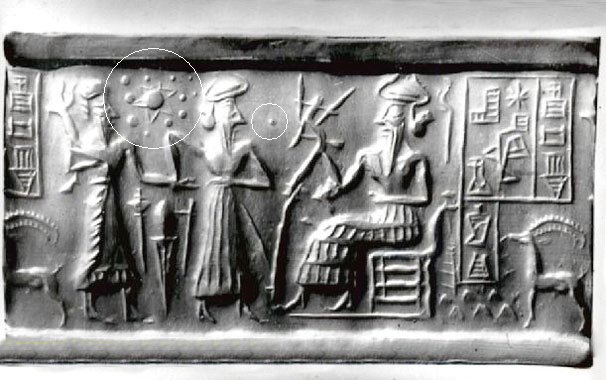 There was a class of craftsmen in addition to the priests and peasants.
The craftmen devoted most of their time to producing things for either the temples or the warrior-soldiers which protected the temple community.
The people were to devote their lives to propitiating the gods to prevent calamities from befalling the community. 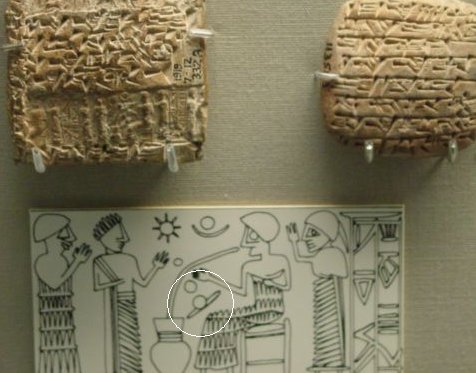 The political structure of Sumer was independent city-states. The map shows the important communities.
Note that in Sumerian times the Persian Gulf extended to the area of the city-states.
Since then the rivers have filled in hundreds miles of Gulf and Ur which was once almost on the coast is hundreds of miles from the sea.
Along with the map of Sumer there is a schematic depiction of the layout of the city of Ur with a branch of the Euphrates River running through the city with a protected harbor at the city walls.
There was another protected harbor at the city walls. The temple grounds were separated from the rest of the city.