2200 years old remains of a man with a deformed knee attached to a prosthetic leg tipped with a horse hoof have been discovered in a tomb in an ancient cemetery near Turpan, China.
This tomb holds a male and female together. 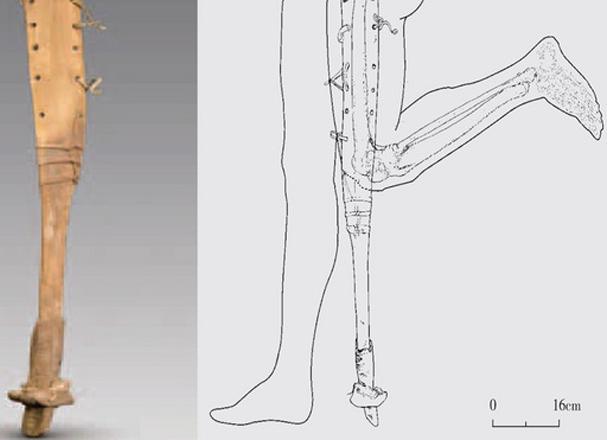 Excavators found that left leg of the male occupant is deformed, with the patella, femur and tibia together and fixed at 80.
That man couldn’t straighten his left leg out so the prosthetic leg, when attached, allowed the left leg to touch the floor when walking. The horse hoof at the bottom of the prosthetic leg acted like a foot.

The prosthetic leg was made of poplar wood; it has seven holes along the two sides with leather tapes for attaching it to the deformed leg.
The lower part of the prosthetic leg is rendered into a cylindrical shape, wrapped with a scrapped ox horn and tipped with a horsehoof, which is meant to augment its adhesion and abrasion.
The severe wear of the top implies that it has been in use for a long time.
Radiocarbon dating indicates that the tomb in Turpan (also spelled Turfan) dates back around 2,200 years.

Archaeologists estimate that the man was about 5 feet 7 inches (1.7 meters) tall, and between 50 and 65 years old when he died using that prosthetic hoofed foot.
The man appears to have been a person of modest means, as he was buried with nonluxurious items: ceramic cups and a jar, a wooden plate and wooden bows, the archaeologists found. Sometime after he died, his tomb was reopened, and the body of a 20-year-old woman was put in, disturbing the man’s bones.
The relationship between them was unknown.
The man and the woman in that tomb must be Gushi (also spelled Jushi) people.

Ancient Chinese texts suggest that the Gushi had a small state and very little is known about them.
The Gushi state was conquered by China’s Han Dynasty during a military campaign in the first century B.C., according to ancient records.