Funeral urn, with height 32 cm, diameter 26 cm was unearthed near the Banpo neolithic village site.
Banpo (Chinese: 半坡, Bànpō) is an archaeological site discovered in 1953 and located in the Yellow River Valley just east of Xi’an, China. It contains the remains of several well organized Neolithic settlements carbon dated to 5600–6700 years ago. 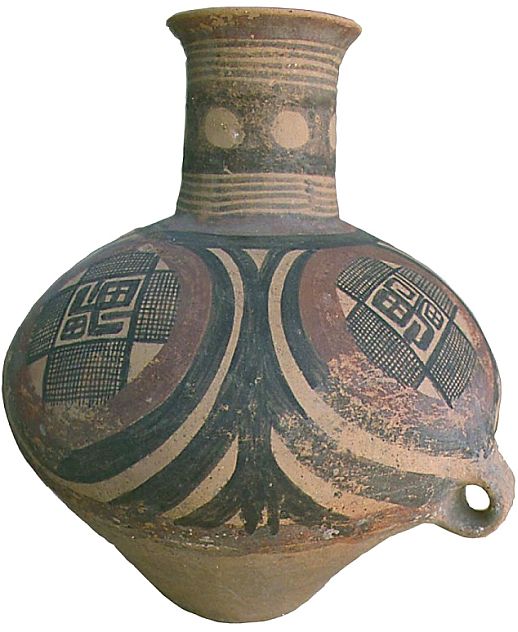 he area of 5 to 6 hectares (12 to 15 acres) is surrounded by a ditch, probably a defensive moat, 5 to 6 meters (16 to 20 ft) wide. The houses were circular, built of mud and wood with overhanging thatched roofs. They sat on low foundations. There appear to be communal burial areas.
Banpo is the type site associated with Yangshao Culture. Archaeological sites with similarities to the first phase at Banpo are considered to be part of the “Banpo phase” (7th millennium BC) of the Yangshao culture. Banpo was excavated from 1954 to 1957.

The settlement was surrounded by a moat, with the graves and pottery kilns located outside of the moat perimeter. Many of the houses were semisubterranean with the floor typically 1 meter (3 ft) below the ground surface. The houses were supported by timber poles and had steeply pitched thatched roofs.

This pottery is spherical corpus with vertical ringlugs at the middle, tapering to a base which is a little wider than the mouth, decorations in dark brown and light violet.

These are estimated to be from the Yangshao Neolitic period (2200-1800 BCE), representing the oldest Chinese pictograms/marks/character.
The above picture has a character “TIAN” for field, a cross with a square, inside a vedic symbol Swastika.