Many believe that Linga means male reproductive organ and Shiva Lingam is Phallus, the symbol of generative power in nature.
But this is a wrong assumption even by many hindus due to their ignorance and lack of understanding sanskrit. 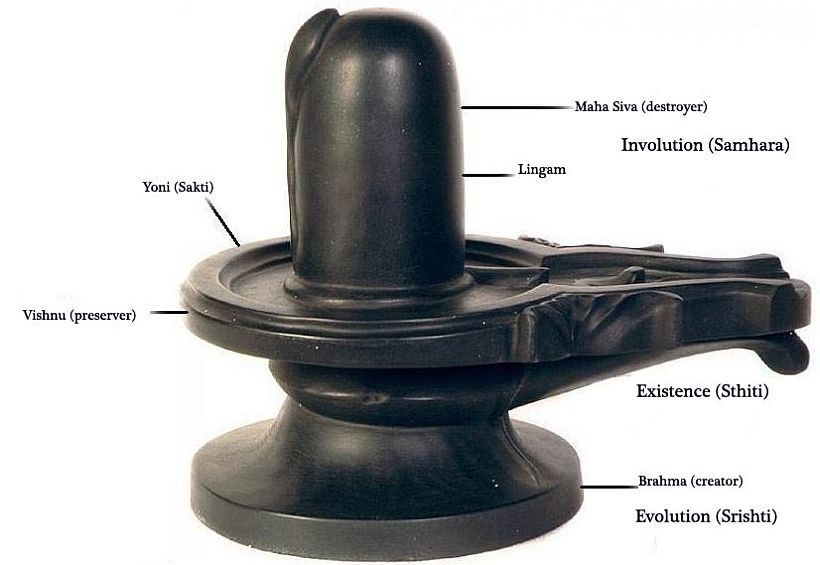 Infact SiSna is correct sanskrit word for male phallus and not Lingam.
Over many years, ignorance and misinterpretations made many believe that Lingam means Phallus.

In Sanskrit, Linga means a ‘mark‘ or a symbol, which points to an inference.
Thus, Siva Lingam is a mark that reminds of the Omnipotent Lord, who is formless.
Original Siva Lingas were Salagramas, which were oval/egg shaped, representing the shape of solar system and also the galaxy.
They are still worshipped as Siva Lingas, after being placed vertically on a mount(peetham or Paanapattam) across many temples.
This Linga is shaped like an egg, and represents the ‘Brahmanda‘ or the cosmic egg.
Linga signifies that the creation is effected by the union of ‘Prakriti‘ and ‘Purusha,’ the male and the female powers of Nature.

Linga Purana says that the foremost Linga is devoid of smell, colour, taste, etc, and is spoken of as ‘Prakriti‘ or Nature itself.

Siva Purana describes formation of Lingam as a pillar of light for which top and bottom were never found.
The night when this pillar of light appeared is celebrated as Mahasivaratri.
Siva Linga consists of 3 parts, the lowest of which is called the ‘Brahma-Pitha which creates the universe,’ the middle one is the ‘Vishnu-Pitha‘ which preserves the creation, and the uppermost one, the ‘Siva-Pitha‘ which destroys or absorbs everything back into itself.

Siva Lingam can be explained multiple ways but one simple scientific way is to observed Sine Wave.
The first sound in creation, which is said to be the Pranava Naadam, is Omkaaram.
If you chant this Omkaaram slowly, record it and observe the sound wave created, you can notice a Sine Wave.
This is how the formless god tried to take a form for creating this universe.

Siva is described to be in pre-atomic stage (anupoorva sthiti), i.e in form of electrons which move in sine wave shape.
Vishnu is described as the one spread all over (which are molecules, made by binding of atoms).
Thus, the entire creation is Siva and Vishnu.