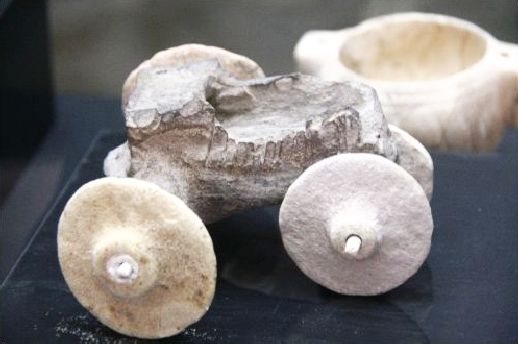 Today’s kids might be playing with remote controlled toy cars made of plastic, metal and rubber.

But Toy Car was made for kids long before we could imagine.

A stone car with two axles and 4 wheels dating from about 7500 years ago was found during excavations in the Kiziltepe district of the southeastern province of Mardin, are now on display at the Mardin Museum, Turkey.

Ancient texts of Greece and India have descriptions of Chariots but they were all two wheeled.

Few Puranas and Mythologies in India described about chariots with four or more wheels but they were all equal sized wheels, pulled by horses.

Moreover, none of them were discovered till date.

This 7500 year old Toy Car made of stone belongs to late-stone age and almost looks like a toy-chariot (but no provision to be pulled by animals) or toy-tractor, used in agriculture.

There is also a 5 centimeter stone, which was uncovered at an excavation site at the Girnavas Mound, 4km from the historic district of Nusaybin.
Inscription on stone is 2,800 years old and describes about selling of a garden.
The content of the deed refers to a fruit garden, and the fruit trees within, which are to be split between the three sons of the owner. The deed refers to “Nabulu” which was in fact the old name of current Nusaybin.