Though there are many proofs found by modern archaeologists that pre-islamic arabia used to follow Vedic religion, , many try to deny it.
(Hinduism is a wrong word. It was assumed by western invaders as to be followed by people residing along hind/sindh river and now it flows only in Pakistan) 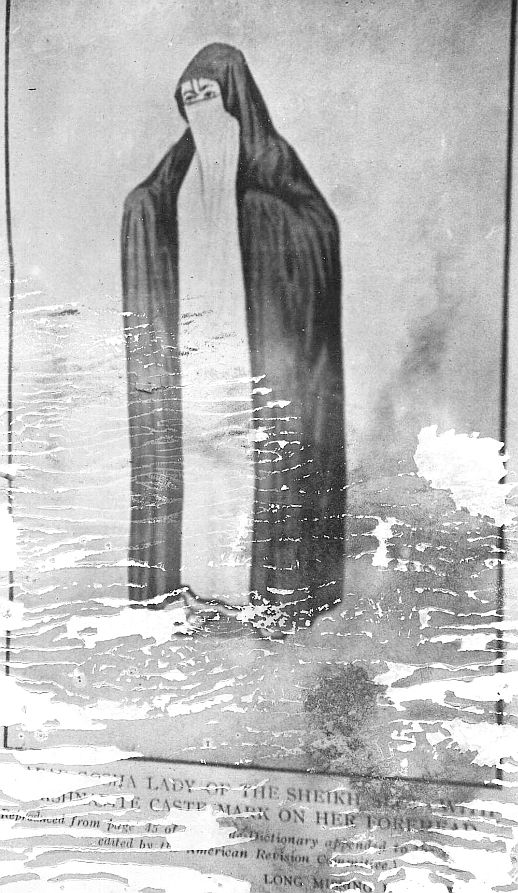 Photo above shows an Arab sheikh’s wife in gosha/veil having a U-shaped verimilion mark on her forehead.
Such marks were found in old pictures of australian bushmen, egyptian rulers, pyramid architects etc.
These u-shaped Vaishnav marks can be found among stauch followers of Vishnu or his avatars (incarnations) like Ram, Krishna etc even today in india.

This picture is published in the Bible Dictionary (appended to the Holy Bible edited by the American Review Committee) and also in “Long missing links”, or, “The Marvellous Discoveries about the Aryans, Jesus Christ and Allah” by Vaduvur K Duraiswami Ayyangar (1931).

A reference to king Vikramaditya comes in an inscription found in the Kaaba in Mecca.
The text of the inscription, found inscribed on a gold dish hung inside the Kaaba shrine, is said to have recorded in a volume known as Sayar-ul-Okul (meaning, memorable words) treasured in the Makhtab-e-Sultania library in Istanbul, Turkey.

Translation : …Fortunate are those who were born (and lived) during king [Vikramaditya’s] reign. He was a noble, generous dutiful ruler, devoted to the welfare of his subjects. But at that time we Arabs, oblivious of God, were lost in sensual pleasures. Plotting and torture were rampant. The darkness of ignorance had enveloped our country. Like the lamb struggling for her life in the cruel paws of a wolf we Arabs were caught up in ignorance. The entire country was enveloped in a darkness so intense as on a new moon night. But the present dawn and pleasant sunshine of education is the result of the favour of the noble king Vikramaditya whose benevolent supervision did not lose sight of us – foreigners as we were. He spread his sacred religion amongst us and sent scholars whose brilliance shone like that of the sun from his country to ours. These scholars and preceptors through whose benevolence we were once again made cognisant of the presence of God, introduced to His sacred existence and put on the road of Truth, had come to our country to preach their religion and impart education at king Vikramaditya’s behest..

This is written by Jirrham Bintoi who lived 165 years before the prophet Muhammed.
There is also a story in Bhavishya Purana about Vikramaditya travelling to arabian desert. 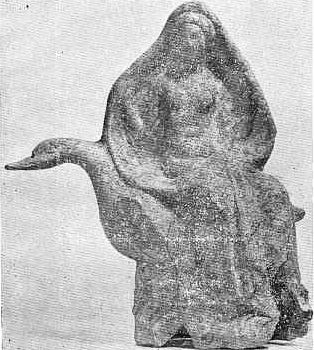 This is an idol of Vedic Goddess Saraswati using Swan as carrier.
Saraswati is depicted in same way among all vedic descriptions and images. She is assumed to be goddess of knowledge and education.
This idol was found in arabia and dates back to pre-islamic days in that region.
This is now displayed in British Museum. 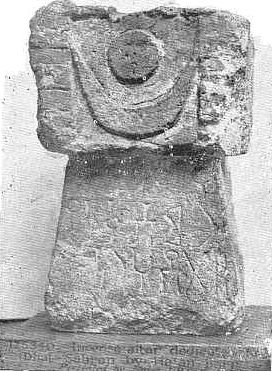 British Museum, London, has this inscription tablet from pre-Islamic Arabia. The crescent and sun on top relate to the Vedic dictum “Yawachchandra Diwakarau,” which signifies that the gift mentioned in the inscription should last as long as the sun and moon.

This crescent and sun is a Vedic symbol, which still can be seen in use on the flags which adorn the top of the temple of Lord Jagannatha in Jagannatha Puri, as well as on coins in Hindu Nepal.

This symbol is in reference to the idea that it is Lord Vishnu who is the source of the light for the sun and the moon.
Thus, this symbol which also adorns Islamic flags (with moon and star on it) shows its Vedic influence. 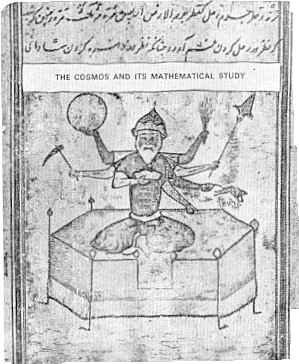 This photo is found on cover of a 13th century book written by persian author Abu Jafar Muhammad Nasir al-Din al-Tusi (1201-1274).
A multi-armed deity (holding a book or Vedas, an axe, drum, bunch of incense sticks, a lotus bud and a mouse) and the hexagonal platform on which he sits, certainly shows the Vedic influence.
This deity looks like Brahma, the creator god described in Vedas.
It is now displayed in the Egyptian National Library, Cairo.

The Kaaba stone is another controversy as few believe that it was Siva Linga, broken into pieces and held together by silver framing.
Muslims circumambulate the Kaaba counterclockwise seven times (just like vedic religion followers do it in temples).
Also they are advised to wear seamless white cloth around waist and wrap another one around their torse, across their shoulder.
This is how vedic priests dress while peforming rituals in temples. Few south indian temples impose strict rules on visitors to follow same dress code (for men) while they enter into the temple.

Syrians had once carried away the Kaaba stone as a war trophy and kept it for 22 years. 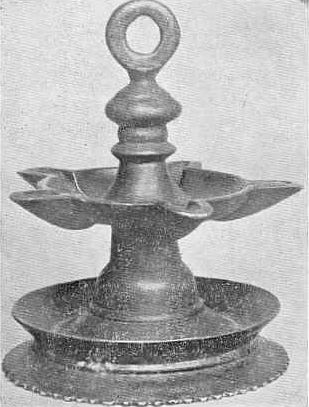 A typical ancient Vedic brass lamp from Saudi Arabia. Again it is a sign of the Vedic influence that was and still is found in the Middle East and Arabia.
Such lamps are still used in India today in temples and houses.
Stories of Allauddin, or Aladdin, and His Lamp come from ancient Vedic India, although many give credit to Arabia.

There is also a belief that Kaaba stone is Siva Linga and the word Kaaba is derived from ‘Kaabaleswar‘ (Kapaleeshwarar Temple in Chennai).
Inscriptions about King Vikramaditya are found on a gold dish hung inside the Kaaba shrine in Mecca.
This temple gets its name from Kapalam (head) and eeshwarar an alias of Siva.