Baku Ateshgah (Persian: آتشگاه) or “Fire Temple” is an ancient Hindu religious temple dedicated to Jwala Ji in Surakhani, a suburb of greater Baku, Azerbaijan.
It was initially thought to be a Zoroastrian fire worship place as “Atash” (آتش) is the Persian word for fire.
Four holy elements of local people belief were: ateshi (fire), badi (air), abi (water), and heki (earth).
A pentagonal complex, which has a courtyard surrounded by cells for monks and a tetrapillar-altar in the middle, was built during the 17th and 18th centuries but temple ceased to be worshiped after 1883 with the installation of petroleum plants (industry) at Surakhany. The complex was turned into a museum in 1975.

Fire is considered sacred in both Indo-Iranian branches of Hinduism and Zoroastrianism (as Agni and Atar respectively),and there has been debate on whether the Atashgah was originally a Hindu structure or a Zoroastrian one. The trident mounted atop the structure is usually a distinctly Hindu sacred symbol (as the Trishul, which is commonly mounted on temples) and has been cited by Zoroastrian scholars as a specific reason for considering the Atashgah as a Hindu site.

There are several inscriptions on the Ateshgah. They are all in either Sanskrit or Punjabi, with the exception of one Persian inscription that occurs below an accompanying Sanskrit invocation to Lord Ganesha and Jwala Ji. Although the Persian inscription contains grammatical errors, both the inscriptions contain the same year date of 1745 Common Era (Samvat/संवत 1802/१८०२ and Hijri 1158/١١٥٨).
Taken as a set, the dates on the inscriptions range from Samvat 1725 to Samvat 1873, which corresponds to the period from 1668 CE to 1816 CE.
One press report asserts that local records exist that state that the structure was built by the Baku Hindu traders community around the time of the fall of the Shirvanshah dynasty and annexation by the Russian Empire following the Russo-Persian War (1722–1723).

The inscriptions in the temple in Sanskrit (in Nagari Devanagari script) and Punjabi (in Gurmukhi script) identify the site as a place of Hindu and Sikh worship,and state it was built and consecrated for Jwala Ji, the modern Hindu fire deity. Jwala (जवाला/ज्वाला) means flame in Sanskrit . 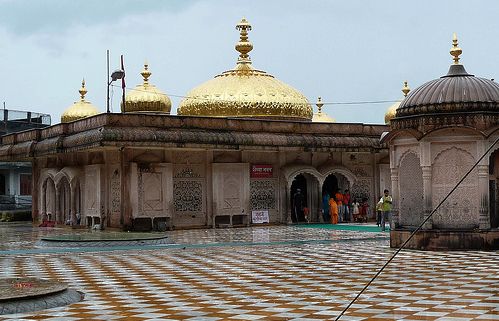 There is a famed shrine to Jwala Ji in the Himalayas, in the settlement of Jawalamukhi, in the Kangra district of Himachal Pradesh, India to which the Atashgah bears strong resemblance and few scholars have stated that some Jwala Ji devotees used to refer to the Kangra shrine as the ‘smaller Jwala Ji‘ and the Baku shrine as the ‘greater Jwala Ji‘.

Other deities mentioned in the inscriptions include Ganesha and Shiva. The Punjabi language inscriptions are quotations from the Adi Granth, while some of the Sanskrit ones are drawn from the Sat Sri Ganesaya namah text.

The temple was examined in the late 19th and early 20th century by Parsi dasturs, some of whom had also visited the Jwala Ji at Kangra in the Himalayas.
Based on the inscriptions and the structure, their assessment was that the temple was a Hindu shrine.
In 1925, a Zoroastrian priest and academic Jivanji Jamshedji Modi traveled to Baku to determine if the temple had indeed been once a Zoroastrian place of worship. Until then (and again today), the site was visited by Zoroastrian pilgrims from India.
In his Travels Outside Bombay, Modi observed that “not just me but any Parsee who is a little familiar with our Hindu brethren’s religion, their temples and their customs, after examining this building with its inscriptions, architecture, etc., would conclude that this is not a [Zoroastrian] Atash Kadeh but is a Hindu Temple, whose Brahmins (priests) used to worship fire (Sanskrit: Agni).”

In 1876, James Bryce visited the region and found that “the most remarkable mineral product is naphtha, which bursts forth in many places, but most profusely near Baku, on the coast of the Caspian, in strong springs, some of which are said to always be burning.”
Without referencing the Atashgah by name, he mentioned of the Zoroastrians that “after they were extirpated from Persia by the Mohammedans, who hate them bitterly, some few occasionally slunk here on pilgrimage” and that “under the more tolerant sway of the Czar, a solitary priest of fire is maintained by the Parsee community of Bombay, who inhabits a small temple built over one of the springs“.

The fire was once fed by a vent from a subterranean natural gas field located directly beneath the complex, but heavy exploitation of the natural gas reserves in the area during Soviet rule resulted in the flame going out in 1969. Today, the museum’s fire is fed by mains gas piped in from Baku city.