CT Scan of a 1000 year old Buddha Statue from China Reveals Mummified Monk Hidden Inside.
These unusual contents of the statue were discovered in the 1990s when the statue underwent restoration. Experts were unable to remove the mummy due to the risk of disintegration, so they could do little more than peer into the darkened cavity of the Buddha. 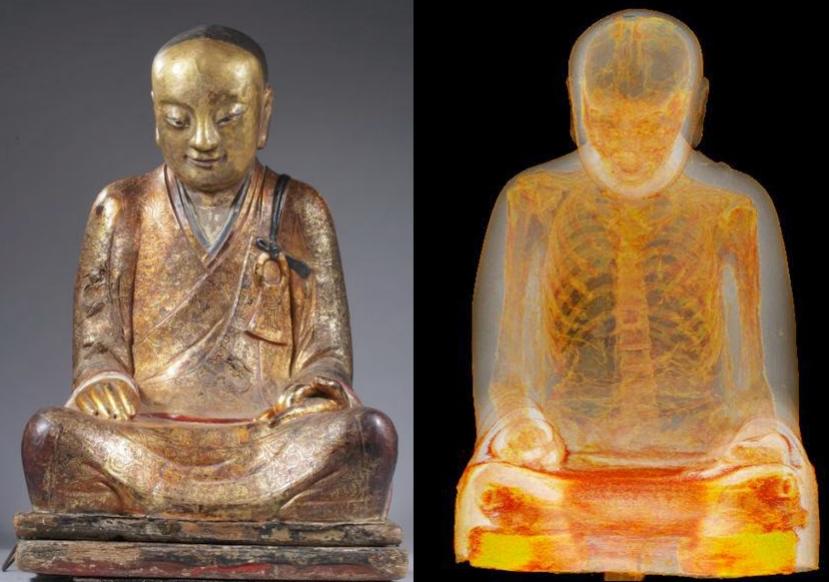 The mummy was found sitting on a bundle of cloth covered in Chinese inscriptions, revealing its identity as a Buddhist monk called Liuquan who may have practiced “self-mummification” to prepare for life after death.
The process of self-mummification is a known tradition in countries like Japan, China and Thailand, and was practiced over a thousand years ago.
The elaborate and arduous process includes eating a special diet and drinking a poisonous tea so the body would be too toxic to be eaten by maggots.
Few monks who were able to successfully complete the process were highly revered.
The monk, who is sitting in the lotus position, is thought to have starved himself to death in an act of extreme spiritual devotion in China or Tibet in the 10th century. His preserved remains were displayed in his monastery.

It must have happened that during the first 200 years, the mummy was exposed and worshiped in a Buddhist temple in China. Only around the 14th century did they do all the work to transform it into a nice statue.
This statue was brought from China to Hungary through a private buyer, who wanted to get it restored.
Researchers are still waiting on DNA analysis results in hopes to trace the mummy back to its exact location in China.

During CT scan, it was discovered that the mummy’s organs were missing.
They were placed by little scraps of paper covered with Chinese characters, which revealed the monk’s identity as Liuquan.
But, it is a perfectly preserved body with skin, skeleton and muscles inside the statue. Monk’s age must be around 40.