Hemu also known as Hemchandra Vikramaditya was a Hindu king who previously served as a general and Chief Minister of Adil Shah Suri of the Suri dynasty when the Mughals and Afghans were vying for power across North India.
He was beheaded on 5 November 1556 CE by Bairam Khan to get a title of Ghazi for Akbar.

Ghazi is the title given to Muslim warrior who kills the infidels or Kafirs to establish Islamic rule in that area.
Ghaziabad in Uttar Pradesh was formed after such murders.
In 1554 CE Adil Shah assassinated Firuz Shah Suri, the 12 year old son of Islam Shah Suri and ascended the throne.
Hemu was appointed as his Wazir (minister).
In 1555, Adil’s brother in law, Ibrahim Shah Suri of Agra, revolted and Adil Shah lost throne. This lead to kingdom being divided into 4 parts.
Ibrahmin was defeated by Hemu twice, once near Kalpi and again near Khanua. He took refuge in the Bayana fort, which was besieged by Hemu.
When Muhammad Shah of Bengal attacked Kalpi, Adil Shah called for Hemu, who defeated and killed at Chhapparghatta near Kalpi.
Adil took control of Bengal and appointed Shahbaz Khan as the Governor. He made Chunar his capital.
Bengal was again lost to Ghiyasuddin Bahadur Shah II (Khizr Khan Suri), who was son of Muhammad Shah.
In 1557 CE, Adil Shah was defeated and killed in a battle with Khizr Khan Shah.

Hemu fought Afghan rebels across North India from the Punjab to Bengal and the Mughal forces of Humayun and Akbar in Agra and Delhi, winning 22 battles for Adil Shah.
Many of these battles were against Afghans who had rebelled against Adil Shah.
Hemu was in Bengal when Humayun died on 26 January 1556. In the same year Hemu captured Agra and intended to attack Delhi.
Humayun’s successor Akbar was informed by his governer, Tardi Beg Khan about Hemu’s plans.
Mughals were outnumbered in Battle of Tughlaqabad and Hemu took possession of Delhi on 7 October 1556 CE.

After capturing Delhi, Hemu claimed royal status and assumed the title of Vikramaditya (or Bikramjit), an appellation used by a number of Hindu kings in India’s ancient past.
Hemu’s military force was composed almost entirely of Afghans, who did not like his act of usurpation and prayed for his downfall.
But Hemu continued to acknowledge Adil Shah as his Emperor.
However, Hemu’s rule lasted for less than a month as Akbar attacked him at panipat.

Akbar and Bairam Khan stayed in the rear, eight miles from the battleground. In a desperately fought battle, Hemu has reached cusp of victory, when a mughal arrow stuck in his eye and made him unconscious.

This triggered panic in army which broke formation and tried to fled. More than 5000 soldies were killed while attempting to run away.
Elephant carrying the wounded Hemu was captured and led to the Mughal camp. Bairam Khan asked the 13-year-old Akbar to behead Hemu, but he refused to take the sword to a dying man. Akbar was persuaded to touch Hemu’s head with his sword after which Bairam Khan executed him.
Hemu’s head was sent to Kabul while his body was gibbeted on a gate in Delhi.
A minaret was subsequently constructed of the heads of the other dead.
This battle made Mughals realise importance of elephants in battle.

Hemu’s family who lived in Machari (near Alwar) was captured by Pir Muhammad, a Mughal officer who had fought at Panipat. Pir Muhammad offered to spare the life of Hemu’s elderly father if he converted to Islam. When the old man refused, he was executed. However, Hemu’s wife managed to escape.
Hemu’s supporters erected a memorial for him at Panipat now known as Hemu’s Samadhi Sthal at Shodapur village on Jind road near Panipat city in Panipat district of Haryana state in India. It stands at the location where he was executed. 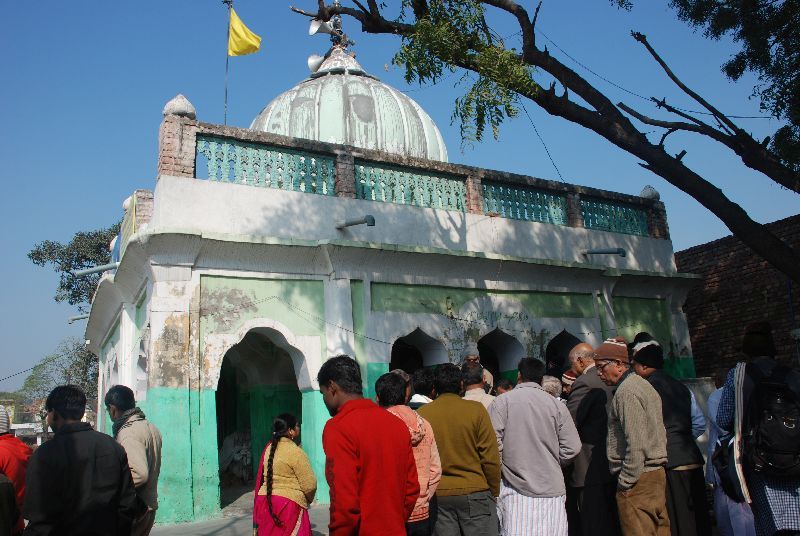 This structure was lying unattended and in a state of neglect by Haryana Government and it has been used by the migrant Muslims who have turned it into a Durgah.
This property, more than 10 Acres in revenue records, which formed the Camp of Babur in 1526 during First Battle of Panipat and Camp of Akbar in 1556 during Second Battle of Panipat was with Haryana ASI till 1990. Area still has a Water Tank constructed with Lakhori Bricks in dilapidated condition built during stay of Babur.
This has been encroached and used as Dargah.
The structure in revenue records is classified as ‘Khanghah‘ in Persian, meaning a ‘Serai‘ or a resting place for travellers. Such Serais were often constructed by rich in memory of dead specially in Rewari area of Haryana to which HemaChandra belonged.
Several such structures, called ‘Chattries‘ or ‘Resting Places‘ for travellers are found in Rewari area with similar architecture and constructed during last many centuries.

This place still has headless body of Raja Hemachandra, but it is made to appear like a dargah (of unknown sufi saint).

In October 2016, few locals removed green flag from dargah and replaced it with a saffron flag.
Posters of Hemchandra Vikramaditya were also put on the board and they demanded eviction of Mohammad Najib, who came from Chennai.
Mohammad Najib claims that he has been coming to his dargah since 1987 and started living in that area since 2002.
Locals argued that King Hemu’s Samadhi was encroached illegally and painted green.
So far police did not conclude the investigation.