Comparing the Aztec game of Patolli with the Indian Pachisi, we can find features which they shared in common. In both cases counters were moved along tracks which were cross-like in shape and drawn upon mats or “boards.”
In both, the movement of the counters was determined by the throw of lots-six cowrie shells in the Indian version and five black beans with white dots on one side in the Aztec version. Although the scoring was arbitrary in both cases, there was a tendency in both to give greater weight to more difficult throws.

Patolli was played by many tribes of Mexico and South America since many years. History goes atleast upto 200 BCE.
The ancient Mayans also played a version of Patolli, which could be an earlier version of Pachisi.
Patolli is a race/war game with a heavy focus on gambling. Players would meet and inspect the items each other had available to gamble. They bet blankets, maguey plants, precious stones, gold adornments, food or just about anything. In extreme cases, they would bet their homes and sometimes their family and freedom.
Agreeing to play against someone was not done casually as the winner of the game would ultimately win all of the opponent’s store of offerings. Each player must have the same number of items to bet at the beginning of the game. The ideal number of items to bet is six, although any number would be acceptable as long as each player agreed. The reason for having at least six bits of treasure is that each player has six markers that will traverse the game board. As each marker successfully completes the circuit around the board, the opponent is required to hand over ownership of an item from his or her treasure. 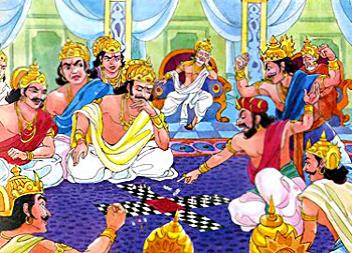 This sounds similar to the dice game (ancient version of Pachisi) played between Yudhishtir and Duryodhan, where pandavas bet everything including themselves and lost.

In Indian history, Pachisi or Chaupar were played since ages. The earlier version must be Chaupar, which is a cross and circle board game.
Puranas depict instances of Lord Siva playing a Chaupar with his consort, Parvati.
Even gods like Krishna, Vishnu, Venkateswara have played similar games. One version has the board/mat in shape of a Vimana (Airplane).
Chaupar differs from Pachisi by the use of 3 tetrahedral (four sided) dice, which is long.

Much ancient games of similar nature were Ashtapada or Dasapada, which predate Chess by hundreds of years.
Infact, Ashtapada was mentioned on the list of games that Gautama Buddha would not play.
Chaturanga, was later derived from similar board, and it could be played on a square board by two or four players.
Variants played on different boards include Daśapada (Sanskrit: दशपद). and, in Gujarat, Chomal Ishto or Chomal Eshto.
Similar traditional games can be found in China and Korea. 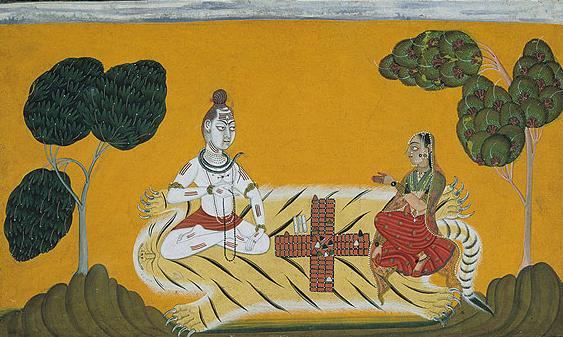 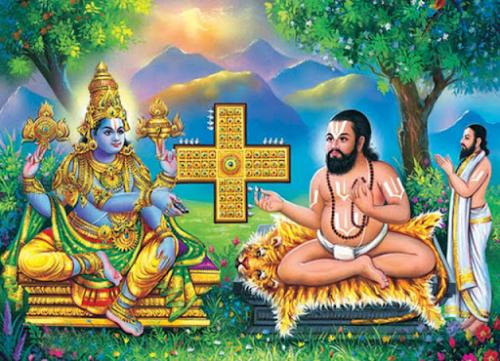 The word Ashtāpada is a Sanskrit term describing the eight-by-eight board that the game is played on. This meaning was first recorded by Patanjali in a Mahābhāshya book. The game came to be ordered to work Brahmin Sutrakrilānga.
Like a chess board, the Ashtāpada board is divided into an eight-by-eight grid of squares, although they are all the same color. The board has special markings known as “castles”, where pieces are safe from being captured or removed from play when mating with an opponent.
Each player receives an even number of pieces to play the game. The goal is to move a piece around the board clockwise, entering the castle, and to regain his castle back in a counterclockwise direction so as to make it reach the center.
In Korea, the board of the traditional game 용호쌍륙 (Korean: 용호쌍륙) is similar to Ashtapada.
In China, the rules of traditional board game 雞婆棋 is similar to Ashtapada.

Patolli game was played by Teotihuacanos (the builders of Teotihuacan), Toltecs, Incas, Aztecs, Zapotecs, Mixtecs allover Mesomaerica.
The Magliabechiano codex says: Patolli’s god was Macuilxochitl, deity of music, dance, gambling and games, called God of the Five Flowers. Players are required to give Macuilxochitl an item if a toss of the beans results in no holes (all blank sides) showing. A space is reserved above the game board for these items. The winner of the round will receive the treasure located in this space as a gift from Macuilxochitl. 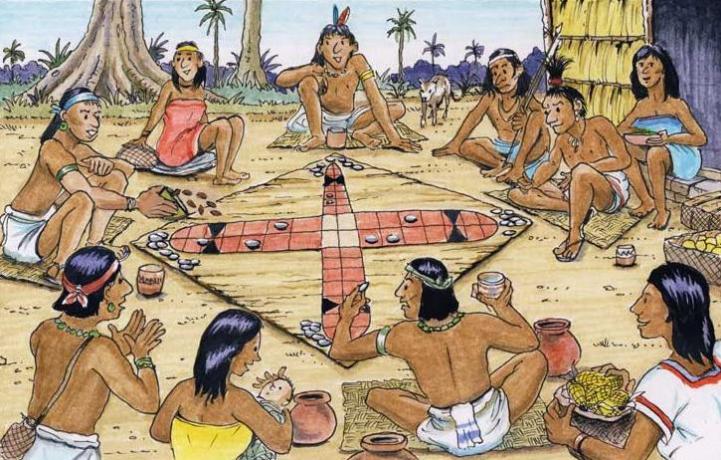 The Spanish priests forbade the game during the Spanish conquest of Mexico, possibly due to people selling themselves and their families into slavery over it. They were even known to have burned the hands of people caught playing the game.

Indian puranas (which are actually their recorded history), mention many races travel from India to South and North America through ships and started settlements there.
Many festivals and traditions like Inti Raymi are similar between India and South America.