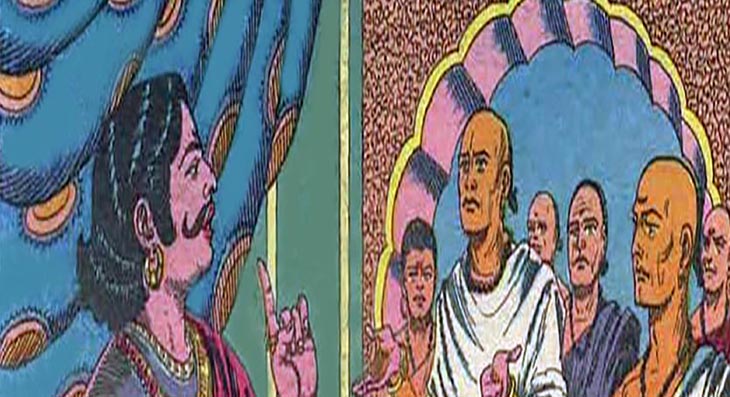 One night Bimbisara had strange dreams and he called upon Brahmins in his kingdom to explain those for him.
These self claimed pundits thought this was an opportunity to extract money from the King and next day they tried to scare him that those were bad dreams are dangerous which can hurt him, his dynasty, kingdom and also people in near future.
When king asked for remedies to oversome those dangers, pundits asked him to get Havan (Yagna) performed at all places in kingdom wherever 2 roads intersected each other to form cross roads.
After Yagnas are done in all such cross roads, donate food, gold and money to us. This will eliminate all negative effects of your dreams.
Without giving it a second thought, King called upon his treasurer and ordered to spend money on what the pundits asked for. 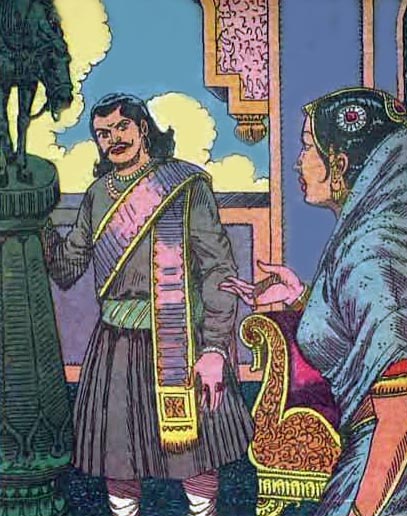 Bimbisara’s wife Kosala Devi came to know about this and warned her husband from spending money.
This Kosala Devi was born to the King of Kosala, Maha-Kosala. She was the sister of King Prasenajit who succeeded her father as the ruler of Kosala. She was married to King Bimbisara, and brought Kaasi kingdom in the marriage. She became his principal queen.
She claims that these brahmins do not have sufficient knowledge and the one with complete knowledge is Buddha, who is currently at Jetavana.
Buddha was the contemporary of Kshemajit, Bimbisara and AjataSatru, the 31st, the 32nd, and the 33rd kings of Magadha.
Queen asks him to visit Buddha and explain his dreams. Only if Buddha recommends these yagnas, king should perform them.
This Jetavana was one of the most famous of the Buddhist monasteries or viharas in India, donated to Buddha by his chief male patron, Anathapindika.
Bimbisara agrees to this and invites Buddha to his palace for Biksha.
King explains his dreams and Buddha interprets each one, saying that none of them are related to him or his present generation.
All these dreams are futuristic and Bimbisara had experienced Oneiromancy.

In first dream, Bimbisara saw 4 bulls entering my palace ferociously. People came in to see them fight with each other. But they suddenly calmed down and left without any fight.
Buddha explains that this dream has nothing to do with present. In future, rulers will become evil and as a result, when clouds arrive in rainy season, people expect them to down pour. But they will be disappointed as all clouds do not rain.
In 2nd dreams, King saw few plants growing out of soil and without full frowth, flowers have blosommed and fruits emerged out of them.
Buddha explained that in future, due to evil deeds of kings, women will be married at childhood and they also deliver kids before reaching proper adulthood.
This also proves that child marriages did not exist in ancient India, until invasions happened.

In 3rd dream, he saw cows drinking milk from calves. Buddha explains that in future older people will stay at home, instead of going on ‘Vaanaprastha‘ and depend of younger ones for their food and well being. The tradition of parents going on Vanaprastha existed in Ikshvaku dynasty until Dasaratha died at home. In those days, old people were fit enough to go on pilgrimage and live by themselves.
In 4th dream, farmers have removed healthy and strong bullocks and were using calves for ploughing fields.
Buddha explains that corrupt Kings will remove efficient ministers and employ young men who lack general knowledge in those positions. 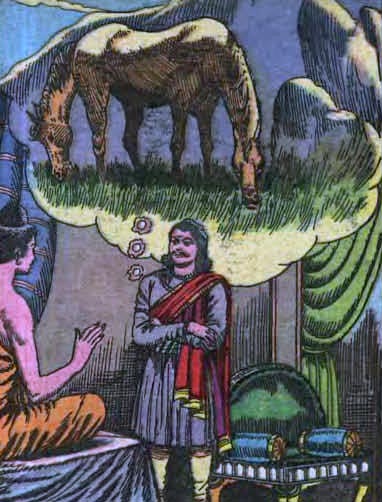 In 5th dream, a horse with 2 heads on both front and back sides was feeding on grass with both heads.
Gautama Buddha explains that in future, Judges will take bribes from both parties and nobody gets justice.
In 6th dream, a man is weaving rope and the woven part which is on floor is getting eaten away by a female fox.
Buddha explains that wicked women will spend their husband’s hard earned money immediately. 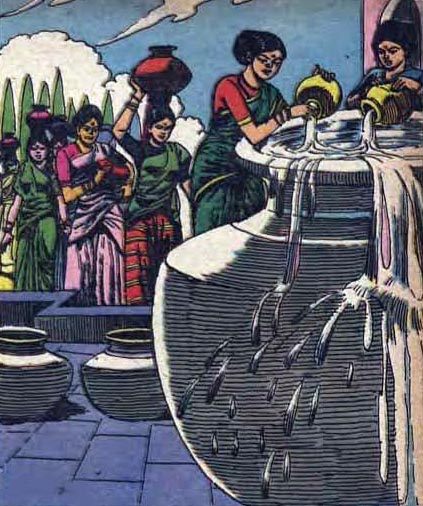 In 7th dream, a large pot is kept outside palace. There are many small empty pots around it. Women walk in with pots full of water and starts pouring into the largest pot.
Even after it starts overflowing, women keep on pouring water into it but ignore the empty pots around.
Buddha says that in future, when Adharma increases, rulers will tax citizens heavily. People will fill the treasury and live without any money for themselves.

In 8th dream, King saw a vessel cooking rice. One part of rice got over cooked, middle part was properly cooked and last part did not boil at all.
Buddha says that corrupt and inefficient kings will not take enough measures for floods and famine. The rice in vessel indicates agriculture. Excess rains in few places destroy crops, while no rain in few areas leads to famine. Proper food production can be seen in few areas only.
In 9th dream, he saw people selling sandalwood in streets. Buddha says that in future few people will sell sacred knowledge and preachings in exchange of money and comforts.

In 10th dream, he saw heavy stones floating on water. In 11th, a group of swans were following a crow. In 12th dream, goats hunted tigers and seeing this, wolves were shivering with fear.
Buddha says that all these are prophetic dreams indicating future. Most talented and wise men gets lost in the flow of time with lack of recognition due to corrupt rulers.
Evil and wicked people gain power, which makes eligible persons follow their orders.
When most undeserving and low people get power, even the most powerful and good men have to fear them. They also get eliminated.

Listening to these dream interpretations, King Bimbisara cancels his havan plans and offers Biksha to Gautama Buddha.
This episode is recorded in Gautama Buddha’s ‘Jataka Tales‘.