Subhhrak (शुभ्रक) is a less known loyal horse in Indian history. It was owned by Karna Singh, the King of Chittorgarh.
Quṭb al-Dīn Aibak also spelt Quṭb ud-Dīn Aibak or Qutub ud-Din Aybak (1150–1210 CE), was the founder of the Mamluk dynasty and the first sultan of the Delhi Sultanate.

He was born to Turkic parents in Turkistan. In his childhood, Aibak was sold as a slave and raised at Nishapur, Persia, where he was purchased by the local Qazi.
After death of his master, he was sold by his master’s son and eventually became a slave of Muhammad of Ghor who made him the Amir-i-Akhur, the Master of Slaves.
He was appointed to military command and became an able general of Muhammad of Ghor.
Around 1170 CE, young princess Kurma Devi daughter of Nayaki Devi (Regent Queen of Gujarat) was wedded to Samar Singh Deva, the Rawal of Chittorgarh. Samar Singh was a Chauhan Rajput, a descendant of the legendary Bappa Rawal.
Kurma Devi (misspelled as Kuramdevi or karma devi in historical records) was Samar Singh’s second wife.
In 1171 CE, Samar Singh had married Prithabai, sister of Prithviraj III, the Chauhan maharaja of Ajmer and Delhi. Soon after her marriage, Prithabai had born a son, Kalyan Rai, but having failed to bear any further sons, fell out of favor of the King in the following years.
Rawal Samar Singh married again, hoping for more sons, in about 1178 or 1179, approximately around the same time Nayakidevi administered that resounding defeat to Muhammad Ghori.

Samar Singh was killed in the 2nd Battle Of Tarain (1191-92 AD) fought between the forces of Prithiviraj Chauhan and Muhammad Ghori, who had returned to conquer India.
Both Samar Singh Deva and his eldest son, Kalyan Rai, died in the second battle of Tarain, and, when Prithabai received the news of her double loss, she immediately mounted the pyre to rejoin her husband. Kurma Devi would eventually follow her, but first she had unfinished business to tend to. She had to ensure that her son Karna seamlessly succeeded his father and that his seat on the throne of Chittorgarh was secure.
By this time Muhammad Ghori had retreated to Multan having left Qutub-ud-din Aibak, his chief general, in charge of Delhi and Ajayameru (Ajmer). During this time Kurma Devi consolidated her forces, forging new alliances with Rajput rulers of the neighbourhood.

When his father Samar Singh died, Karna Singh was still a minor, around 12 years of age. The succession encountered no serious obstacles, and Kurma Devi became regent during the remaining year of her son’s minority. Inspired by the example set by her own mother, young Kurma Devi was an able ruler and re-strengthened her forces following the loss suffered in the 2nd Battle of Tarain.
When the boy king Karna reached his 13th birthday , she led the army and marched northward in search of the man who had killed her husband, in 1194 CE in the month of Asoj (Aswin) following Dassera, the traditional beginning of the warfare season. Nine rajas and eleven chiefs with the title of rawat with their men accompanied her on her march towards Delhi.

As per the battle described in Prithvi Raj Raso, young Kurma Devi and her forces encountered Qutb-ud-din and his army near the old Amber fort.
At the head of her army, leading the charge herself, just like her mother, brave Kurma Devi drove deep into the ranks of Qutub-ud-din’s Army, deep enough for her to confront the general himself and to challenge him in a personal duel.
During the mounted duel, she managed to bury her sword deep into Qutb-ud-din’s flesh, wounding him so severely that he tumbled from the saddle.
Seeing their General fall, and his body being carried away from the fight and, consequently, believing him dead, the Muslim army went into a complete disarray and fled from the battlefield.
Having believed She had killed Qtub-ud-din, and seeing his army fleeing the battlefield, Kurma Devi regrouped her army and led it back south.
Returning to Chittorgarh, she mounted the pyre and, like Prithabai.

Qtub-ud-din did not die from his wounds. He eventually recovered and returned to Delhi, and subsequently declared himself not viceroy but Sultan of Hind.
He destroyed the temple of Vishnu, which also had Dhruv Sthambh or Vishnu Dhwaj. This was later named as Qutub Minar in Delhi.
With capital at Delhi, Aibak subjugated areas between the Ganga and Yamuna rivers. He then turned his attention to the Rajputs who were still resisting Ghūrid domination. In 1195–1203 CE, he mounted campaigns against their strongholds, while his lieutenant Muhammad bin Bakhtiyar Khilji conquered Bihar and Bengal.
After Muhammad Ghori was killed by Prithviraj Chauhan. Aibak was the logical successor.
Technically he was still a slave but he quickly obtained manumission. He married the daughter of Taj al-Din Yildiz of Ghazna, one of the other principal claimants to succeed Muhammad of Ghor.

He attacked Mewar once again and captured Karna Singh (son of Kurma Devi). Along with the looted wealth and king, he also carried Karna Singh’s horse Subhrak to Lahore.
Subhrak in sanskrit means, one who is wearing symbols of Subha (good). Like women wear bangles and anklets, this horse was wearing bracelets or anklets to its legs and it was a lucky horse.
After reaching Lahore, Karna Singh tried to escape but was caught again.
Qutubuddin ordered to behead Karna Singh and to increase the disgrace, to play a Polo Match with the dead King’s head.
Next day, to witness beheading, Qutubuddin arrived at the venue riding on the Subhrak horse. 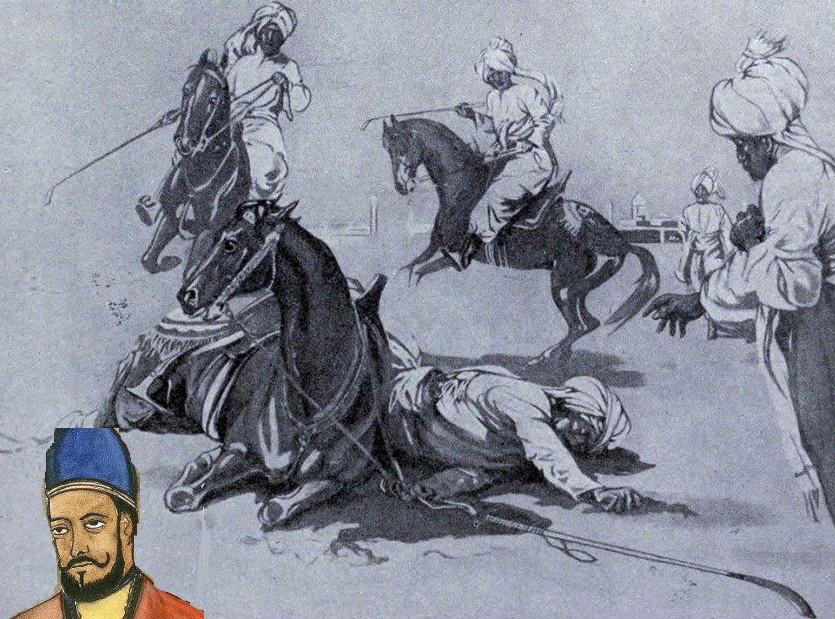 Subhrak (Shubrak) instantly recognized his master Karna Singh and started crying.
When he was freed of chains to cut his head , Subhrak suddenly became uncontrollable and threw Qutubuddin on to the ground.
Without allowing him to defend, Subhrak started hitting his chest and head area with his mighty hooves continuously. After 12–15 powerful hits by a horse, Qutubuddin Aibak died on the spot.
This incident is not covered in history written by detractors. They have written that Qutbuddin Aibak died after falling from a horse.
Which horse is it and how does a person, who was riding horses since age of 11, suddenly fall from a pet horse and die ?

Entire gathering was shocked to see Aibak’s death in hands of Subhrak.
Before the army tried to capture it, Subhrak ran towards its master Karna Singh, who mounted the horse and escaped.
Several days and nights, Subhrak ran and one day it came to the palace of Udaipur.
As soon Karna Singh got down and began to greet his beloved horse, the horse appeared like a statue and had no life in it.
When Karna Singh touched its head, Subhrak fell to the ground, dead !
History of such a loyal horse was omitted in Indian, while ancient persian books recorded how Aibak this incident.