Qutub Minar in Delhi was actually Dhruv Sthambh or Vishnu Dhwaj that existed even before the times of King Vikramaditya and had arabic scripts and motifs retro-installed by Qutb-ud-din Aibak between 1191 – 1210 AD, followed by his successors Iltutmish, Alauddin etc till 1315 AD.
If we look at Qutub Minar from top angle, it shows a lotus of 24 petals.
Lotus is definitely not islamic symbol, but it is ancient vedic symbol and the creator Brahma is said to have been born from a lotus that emerged from Lord Vishnu’s navel.

There is a township adjoining the Kutub Minar is known as Mehrauli. That is a Sanskrit word Mihira-awali. It signifies the town- ship where the well known astronomer Varaha-Mihira of Vikramaditya’s court lived along with his helpers, mathematicians and technicians.
They used the so-called Qutub tower as an observation post for astronomical study. Around the tower were pavilions dedicated to the 27 constellations of the Vedic Astrology.

Even the dome of this tower from inside view has a multiple lotuses embeded within each other (similar to Sri Yantra).

Qutubuddin has left us an inscription that he destroyed these pavilions. But he has not said that he raised any tower. The ravaged temple was renamed as Quwat-ul-Islam mosque.
Indian archaeologists have recorded wrong history without studying the destroyed and defaced Hindi gods statues and motifs in and around this tower.

Stones dislodged from the so-called Qutub Minar have Hindu images on one side with Arabic lettering on the other. Those stones have now been moved to the Museum. They clearly show that Muslim invaders used to remove the stone- dressing of Hindu buildings, turn the stones inside out to hide the image facial and inscribe Arabic lettering on the new frontage.

Bits of Sanskrit inscriptions can still be deciphered in the premises on numerous pillars and walls. Numerous images still adorn the cornices though disfigured.
Muslims never use flower symbols on their constructions, but this tower has multiple lotus symols in stone !!

A panel of the so-called Qutub Minar in Delhi. The exquisite serpentine Hindu pattern in the upper part is the wreath called ‘Makar Torana‘ because it emanates from the mouth of a crocodile. This is a very common sacred Hindu motif in historic buildings. The Islamic tampering and forgery in stone may be seen in the lower portion. An attempt has been made to plant Koranic lettering. Such forgery in stone fooled even historians who thereby inadvertently ascribed those buildings to Muslim authorship. 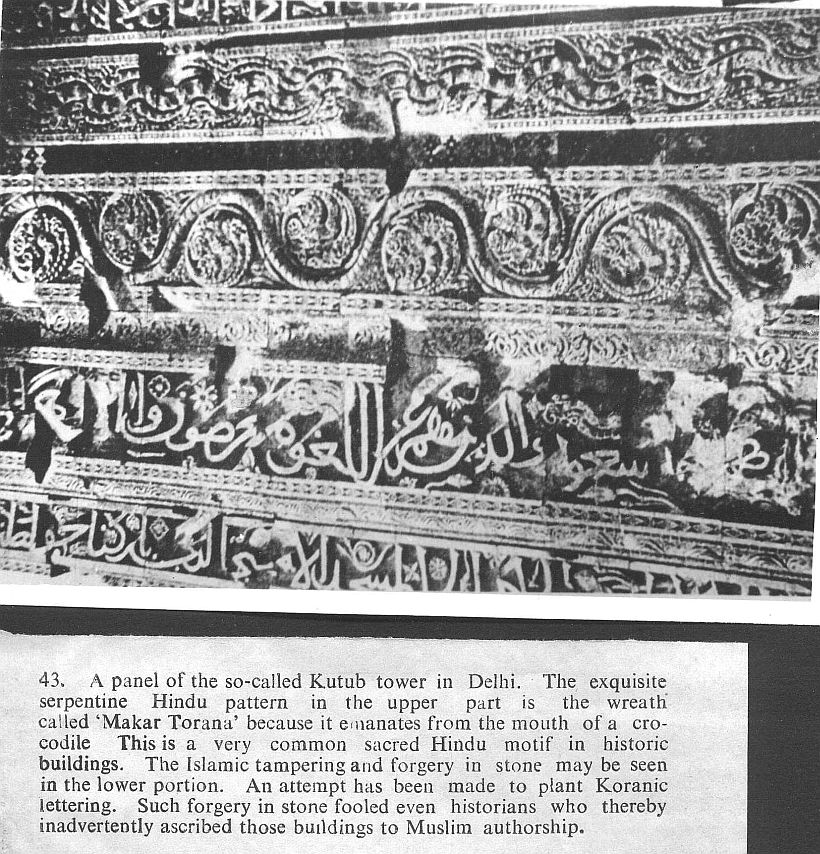 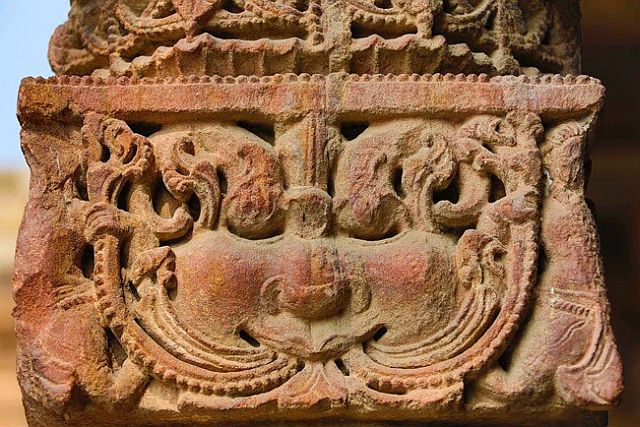 Muslim captors dismantled surface stones of the so-called Kutab tower in Delhi, reversed them and inscribed Koran on the exterior. This Muslim forgery in stone came to light as those stones started falling off the tower. Below is picture of two such pieces with Hindu images carved on one side and subsequent Islamic lettering on the other.

The frieze Patterns on the tower show signs of tampering, ending abruptly or in a medley of incongruent lines. The Arabic lettering is interspersed with Hindu motifs like lotus buds hanging limp.
Sayyad Ahmad Khan, a staunch Muslim and a scholar, has admitted that the tower is a Hindu building.

The Hindu title of the tower was Vishnu Dhwaj (i.e. Vishnu’s standard) alias Vishnu Stambh alias Dhruv Stambh (i.e., a polar pillar) obviously connoting an astronomical observation tower.
Qutub Minar still faces north towards the pole star Dhruv ( north star ), unlike any Islamic structures.
This tower had seven storeys representing the week of those only five exist now. The sixth was dismantled, hauled down and re-erected on the lawns closeby.
The seventh storey had actually a statue of the four-faced Brahma holding the Vedas at the beginning of creation. Above Brahma was a white marble canopy with gold bell patterns laid in it.

Arabic the term ‘Qutub Minar‘ signifies an astronomical Tower. That was how it was described to Sultan and later referred to in court correspondence. In course of time the name of Sultan Qutubuddin came to be unwittingly associated with the Qutub Tower leading to the misleading assertion that Qutubuddin built the Qutub Minar.

No body could explain why a muslim ruler have sacred heart chakra (Anahata) symbol all over Qutub Minar.. (This was later adapted by Jews as STAR OF DAVID)

Much more can be proved about origins of this tower but this should be enough..