Namaste is the word used as a common form of customary salutation in India, especially in Hindu religion both physical and spoken, when two individual meet.
Namaste is a basic way of saying “Hello” but literally speaking it is much more than just saying ‘hello’. Namaste is also used in performing yoga asanas.
Also it is widely used in the Buddhist culture. 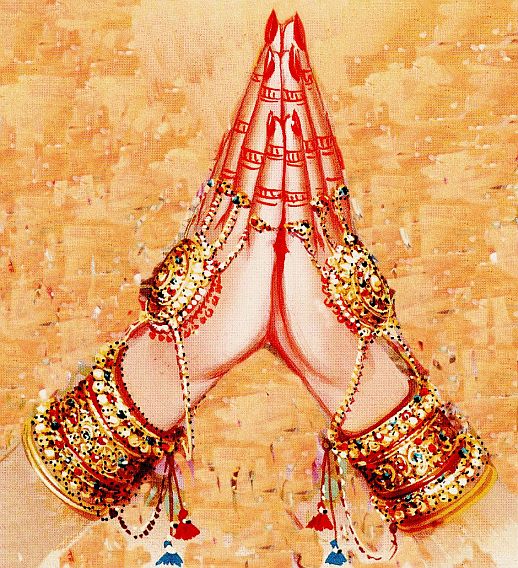 Namaste (Namas + te, Devanagari: नमः + ते = नमस्ते) is derived from Sanskrit and is a combination of the word
“Namaḥa” and the enclitic 2nd person singular pronoun “te“.
The word “Namaḥa” takes the Sandhi form “Namas” before the sound “t“.
Namaḥa means ‘bow‘, ‘obeisance‘, ‘reverential salutation‘ or ‘adoration‘ and te means ‘to you‘ (dative case). Therefore, Namaste literally means “bowing to you“.
Namaste is to be used only when a single person is addressed (since in Sanskrit “te” is singular).

Namaskar is also part of the 16 upacharas used inside temples or any place of formal Puja (worship).
Namaste in the context of deity worship, conclude scholars, has the same function as one in greeting a guest or anyone else. It expresses politeness, courtesy, honor, and hospitality from one person to the other.
This is sometimes expressed, in ancient Hindu scriptures such as Taittiriya Upanishad, as Atithi Devo Bhava (the guest is god).

Namaste is one of the six forms of pranama, and in parts of India these terms are used synonymously

How Namaste is done

It is a gesture which is used in various contexts. To say Namaste you need to fold your hands, touch your palms and bring the hands at the centre of your eye accompanied by slight bowing of your head and then bringing the hands in front of your heart so that your thumb finger touching your heart and the last finger showing the other person whom you are greeting. Thumb finger indicates your heart and last finger indicates the person to whom you are greeting to convey the message that the divine spirit in my heart (also known as Chakra) is same as yours.

Usually a Hindu devotee folds his hands, touches his palms and brings the hands at the centre of his eye and closes his eyes accompanied by bowing in front of God to take the blessings.

While performing yogasana Namaste is most commonly done at the beginning to pray the god to help you to go deeper in to various asanas and at the end to say thank you.

When we join our hands together it brings together positive and negative energy which is in our body.
It connects the right and left hemispheres of our brain which means it unifies our active and receptive nature.
This posture acts as a loop to connect the energy to the heart centre which is the strong source of electric energy in our body.

For a change you can say Namaste instead of hello or just a hand shake when you meet your friends or colleagues. It makes you even and refreshes your mood with peace and respect and diffuses your tension.
Try it and feel the change. “NAMASTE”.