Archaeologists in Visakhapatnam claim that a centuries-old temple exists two kilometers from Visakhapatnam coast, on the sea bed. While the eastern coastal city of Visakhapatnam is steeped in history, few know that there was a temple called “Visakheswara Temple” off the coast of the city.
Many centuries ago this temple went under the sea due to geological adjustments.
The name Vishakhapatnam is believed to have come from a King of Andhra Dynasty, some centuries ago, while he encamped on the site of the present Head Quarters Town of Visakhapatnam on his pilgrimage to Varanasi and being pleased with the place, had built a shrine in honour of his family diety called Visakheswara to the south of Lawsons Bay from which the district has derived its name as Visakheshwarapuram which subsequently changed to Visakhapatnam. 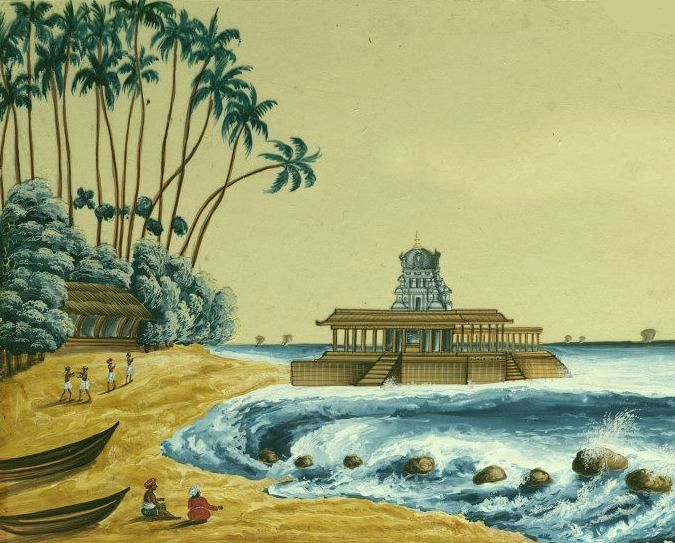 But, according to the priest of Buchcha Rama Lingeshwara temple, the Visakheswara temple existed before Kaliyug.
“Yes, in Shastras and Puranas there’s a mention of this temple. It is believed that before the Kalyug began this temple was submerged into the sea.“, acccording to the priest of Buchcha Rama Lingeshwara temple, which right now exists on the coastline is in the same alignment with that of Visakeswara temple under the sea.
Many old people and fishermen who told Professor Gangadharam, who is working on facts regarding this temple, that their forefathers used to confirm that there is this temple under the sea.

According to the history, the city was named after the God of valour, Visakha, the son of Shiva and Parvati, who is also the ruler of the planet Mars and the God of war.

Visakha is mentioned even in the historic epics of India : Ramayana and Mahabharata.
In the Ramayana, its mentioned as the place where Rama met his devotee, Shabari, during the quest for his wife Sita. Also, this is the place where Rama have met Jambavan, who helped him in his battle with Ravana.
It is believed that Bheema defeated the demon Bakasura at Visakha. The Huge Stone club, at the village of Uppada is said to belong to Bheema, the Pandava.

Another interesting note on the connection of Lord Muruga, who is also called Visakha, with this region. A few years before the above Kalinga war, there was a battle between Vikrama Chola and the south Kalinga king Bhima, who was supported by Ananta Varma. After defeating Bhima, Vikrama enshrined an idol of Muruga in the Srimukhalingam Temple. Tamil poems, Alangudi plates and the Draksharama inscription record these events and mention places like Visakhapatnam, etc., as forest routes and Mahendragiri as the southern border of Kalinga.

The name of Muruga is somehow linked up with with Visakhapatnam. At the Sankara Math in Dwarakanagar, there is a shrine for Baladandayudhapani, who is none other than Lord Muruga.

Sripada Sri Vallabha, the first incarnation of Lord Dattatreya mentioned in his biography that Lord Visakheswara will emerge out of sea in near future.
If excavations are carried out under sea near Buchcha Rama Lingeshwara temple, this could be possible.