An ancient Egyptian statue Neb-Senu has started to rotate inside a glass display case at Manchester Museum, UK.
The 10-inch tall relic dates back to 1800 BC, was found in a mummy’s tomb and has been on display at Manchester Museum for 80 years.
This is first ever instance where this statue started spinning. 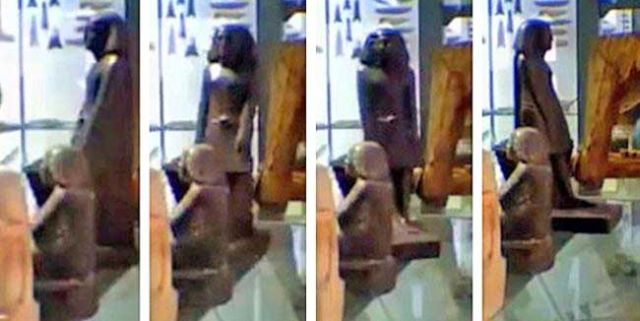 Time-lapse video filmed over the course of a week shows the relic spinning, apparently of its own volition, as visitors mill around.
But by night, 4,000 year-old Neb-Senu, which was originally an offering to Osiris, the god of the dead and ruler of the underworld, is still.

Scientists who explored the Egyptian tombs in the 1920s were popularly believed to be struck by a ‘curse of the Pharaohs’ – and Campbell Price, a curator at the museum, believes that there may be a spiritual explanation to the spinning statue.

Price says “The cause may be subtle vibrations from football or traffic outside, but the statuette has been on a glass shelf in about the same place in the gallery for decades and has never moved before – and none of the other objects in the case move in any way. A mystery? See for yourself.”

“The statuette is something that used to go in the tomb along with the mummy.
Mourners would lay offerings at its feet. The hieroglyphics on the back ask for ‘bread, beer and beef’.
In Ancient Egypt they believed that if the mummy is destroyed then the statuette can act as an alternative vessel for the spirit. Maybe that is what is causing the movement.” says Price.

Yet TV physicist Brian Cox, who teaches at the university, believes that the differential friction is the scientific explanation for the spooky spinning.

“But it has been on those surfaces since we have had it and it has never moved before. And why would it go around in a perfect circle? ” questions Price.