Lonar Crater Lake is a saline soda lake located at Lonar in Buldana district, Maharashtra, India, which was created by a meteor impact during the Pleistocene Epoch. This Lake was first mentioned in Skanda Purana, Padma Purana and the Aaina-i-Akbari.
It lies in a basalt impact structure, is both saline and alkaline in nature. Geologists, ecologists, archaeologists, naturalists and astronomers have reported several studies on the various aspects of this crater lake ecosystem.
It has history that dates back more than 50000 years, carved out when a meteor struck it.
Lonar Lake has a mean diameter of 1.2 kilometres (3,900 ft) and is about 137 metres (449 ft) below the crater rim. The meteor crater rim is about 1.8 kilometres (5,900 ft) in diameter. The circular depression bears a saline water lake in its central portion. The crater’s age is usually estimated to be 52,000 ± 6,000 years (Pleistocene), although a study published in 2010 gives an age of 570,000 ± 47,000 years.
Biological nitrogen fixation was discovered in this lake in 2007.

The historical document called the Ain-i-Akbari (written about 1600 CE) states: “These mountains produce all the requisites for making glass and soap. And here are saltpetre works which yield a considerable revenue to the State, from the duties collected. On these mountains is a spring of salt water, but the water from the centre and the edges is perfectly fresh.”

Many temples surround the lake, most of which stand in ruins today, except for the temple of Daitya Sudan at the centre of the Lonar town, which was built in honour of Vishnu’s victory over the giant Lonasur. It is a fine example of early Hindu architecture. Vishnumandir, Wagh Mahadev, Mora Mahadev, Munglyacha Mandir and Goddess Kamalaja Devia are the other temples found inside the crater. 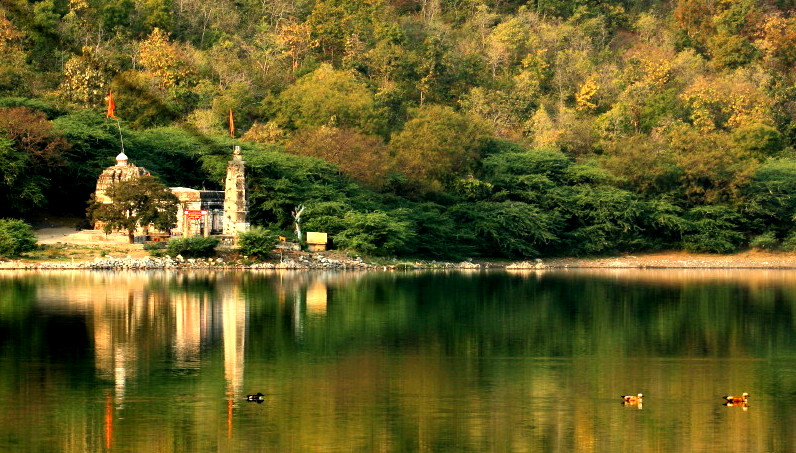 Skanda Purana legend states that a demon named Lonasur became insolent and devastated surrounding countries. He even challenged gods. The people appealed to Lord Vishnu to destroy him. He therefore assumed the form of handsome youth named Daityasudan and could find from demon’s sisters about demon’s hiding place, he removed the lid of den and destroyed the demon. The present Lonar Lake is claimed to be the den of the demon; the water was mixed with his blood and the salts occurred in the water through his flesh.
Daitya Sudan Temple is a Vishnu temple dated to the Chalukya Dynasty which ruled Central and Southern India between the 6th and 12th centuries. It belongs to the Hemadpanthi class and is built in the form of an irregular star. It features carvings similar to those seen at Khajuraho temples. The deity of this temple is made of an ore with a high metal content that resembles stone. The ceiling of the temple has carvings. The exterior walls are also covered with carved figures. The plinth of the temple is about 1.5 m in height and the unfinished roof suggests an intended pyramidal form for the tower.

The temple of Daitya Sudan at Lonar is the best example of the Hemadpanthi style. From the standing image of Surya in the principal niche on the back of the temple it is conjectured that the temple was originally dedicated to the Sun god. However, in the present form its vaishnav temple of god vishnu in its daityasudan avatar. There is a story that a demon by the name of Lonasur or Lavanasur used to reside in this locality along with his sisters. He was killed by lord Vishnu in his Daityasudan Avatar hence the name.

The temple measures 105 ft. long by 84.5 ft. broad. It is a tree chamber temple, the inner most being garbh grub, the sanctum sanctorum, where the idol of lord vishnu standing atop lavanasura (lavana=salt + asura = demon) is there. The present day idol was made by bholse rulers of Nagpur after the original went missing. The second chamber is called antarl where individual pooja are performed, on the roof of this block one can see beautiful cravings of puranic stories viz. Killing of Lavanasur by Lord Krishna and appearance of Dhar of Lonar; story of Kansa and Krishna, story of Narasimha and HiranKashyap and lastly raskrida. The outermost chamber is called as sabhamandap which is meant for group offerings and performance. This portion as well as the entrance gate does not match the style and construction elements of the temple overall. The brickwork might have been added later to the damaged or unfinished temple, which may be attributed to various invasions post the 10th century.

The main entrance of the temple is east facing. The principle niche at the back of the temple has an image of Surya, the sun god, which gives rise to the speculation that this might have been dedicated to him. The niche on south has an image of Chamunda. The one on left of the temple i.e. north has narashima in it. All of these 3 niches are built like mini temples in themselves having elaborate pillars, base and decoration.

There are nemorous ridges onto the temple with different decoration, images having iconic as well as artistic significance. Many of the images depict deities or incidents from puranas. 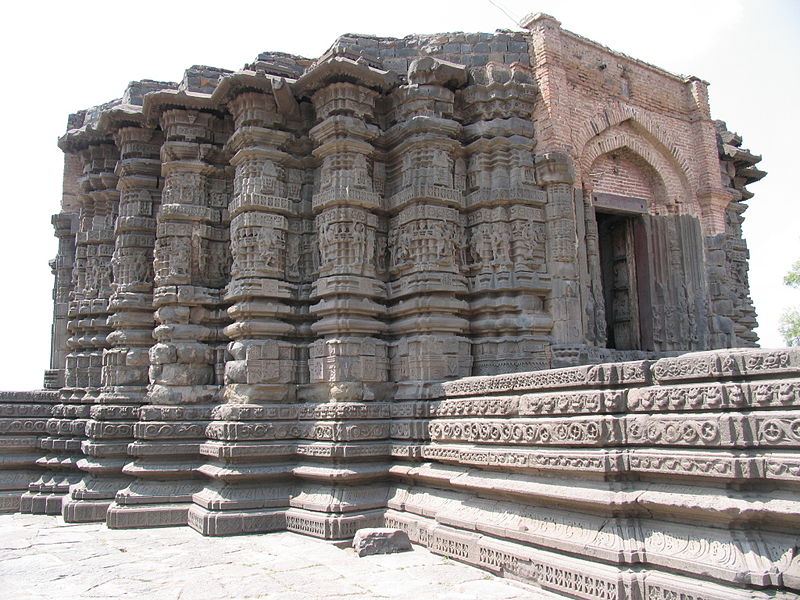 The lake water is saline (sodium chloride, carbonate, fluoride) and highly alkaline (pH reported as 11) due to perennial streams. Sita nahani (it is believed Sita took bath there-at) has sweet water where pilgrims usually like to bathe. Two more small craters exist – Ambar (now in dilapidated state) and Ganesh lakes of 300 m diameter are believed to have originated from impact of small pieces of meteorite probably split from the main body which has probably gone 600 m deep in the earth but no evidence yet reported according to some scientists.

The rock has appearance like glass crystalline beads and chalks as were found by voyager on moon surface. Glasslike appearance developed because of initial huge heat and subsequently cooling took place. Outermost surface is with ejecta blanket with mineral spread over probably unto 400 m deep. Some stones float in water while some have magnetic property.

Polythene plastic dissolves as is reported and some stones of the structures are damaged because of saline waters. A rare mineral muskelinite has been found near the crater. The salts of the water have different names like dalla (white crystalline), khuppal (mixture of carbonate & chloride), pipadi (frequently tinged pink) and bhuski (flaky powder).

The forest-like area has varieties of flora and fauna and they could survive in spite of saline water of the lake. It has fourteen types of ‘Shaival’ (algae). The plants include custard apples, eucalyptus, lemon grass, bamboos, and teak while animals like peacock, crane, rabbit, deer, monkeys, snake, lizards, mongoose, fox and colored birds and its pleasant chirping, bharadwaj, cuckoo, dombari, chandol, and crunch are found.

The area has many herbs of medicinal value: white dorli for animal eye disease, bhoi rigni for skin disease, kal rajhans for gonorrhea and inflammation, arjun saroda or red katra for wound healing are found. Adulsa leaves for whooping cough, bitter naita on fever, ramkati on headache, white or red vasu for anemia or leukemia or jaundice, white rui for asthma, thorny korati for hair problem, black pithori for conceiving, night-blind flower for poison antidote and many others too found in plenty.