Axis Mundi, the centre of the universe, the navel of the world, the world pillar, Kang Tisé or Kang Rinpoche (the ‘Precious Jewel of Snow’ in Tibetan), Meru (or Sumeru), Swastika Mountain, Mt. Astapada, Mt. Kangrinboge (the Chinese name) – all these names, belong to one of the holiest and most mysterious mountains in the world – Mount Kailas. 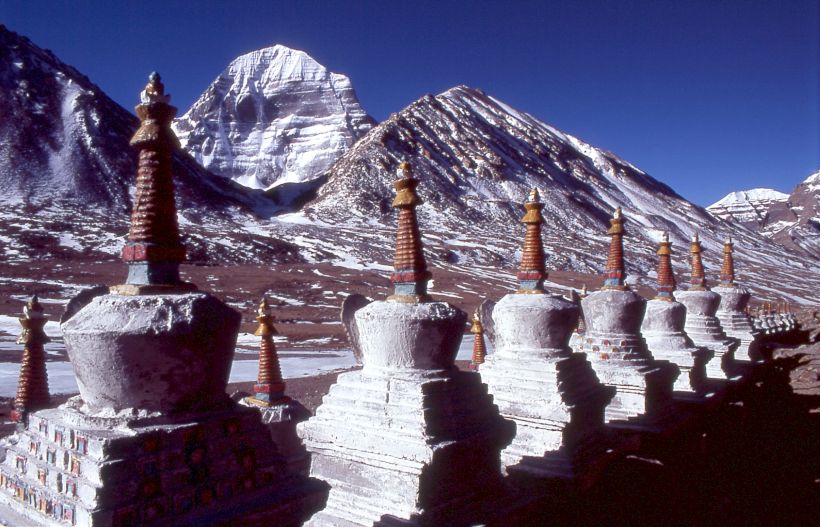 Kailas mountain rises to an altitude of 6714 meters and is smaller than the nearby mountains in himalayan range but its speciality lies not in its height but in its mysterious shape and radio-active energies by pyramids around it.
The area around this great mountain is the source of four life-giving rivers; the Indus, Brahmaputra, Surlej and Karnali, which is a major tributary of India’s sacred Ganges, begin here.

Two lakes are situated at the base of the mountain. The higher lake Manasarovar (one of the highest freshwater lakes in the world), is the sacred lake, and is round like the sun. The lower lake Rakhas Tal (one of the highest salt-water lakes) is the devil’s lake and has the shape of the crescent moon. The two lakes represent solar and lunar forces, good and negative energies respectively. 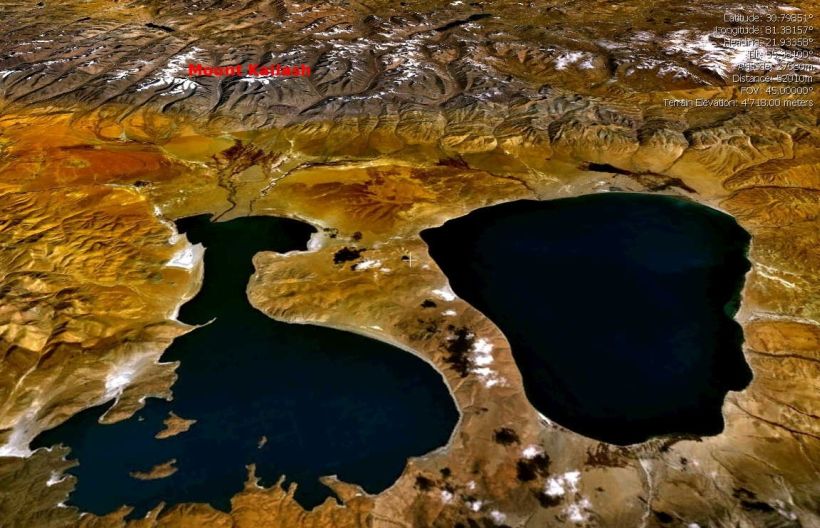 While all hindus who visit Kailas mountain, take a dip in Lake Manasarovar (in sanskrit, Manas=mind (of Brahma, the creator and Sarovar=Lake), they avoid Raksha Taal near Mount Kailash where bathing is prohibited. It is said that Ravana took bath in that lake and now no ones take bath because who ever baths in the water of Raksha taal they get disfigured or become Rakshas (inherit such qualities).
Ravana, the King of Lanka wanted to take Mount Kailas to his kingdom. He tried to up Mount Kailas and leave for Lanka but could not lift it.
Why a King wanted to take Mount when he had everything in world. It may be because Kailas was a nuclear power plant which Ravana wanted to place in Lanka.
After touching radioactive source, Ravana carried nuclear residue which was left in Lake RakshasTaal after he bathed in it. Now whoever bathes in radioactive water will get disfigured due to ill effects of radiation.

To Tibetan Buddhists, Kailas is the abode of the tantric meditational deity Demchog. Hindus see Kailas as the throne of the great god Shiva, one of their most significant deities. Jains revere Kailas as the site at which their first prophet received enlightenment. Buddhist, Hindu and Jain pilgrims from the world over go to this holy mountain to circumambulate. Climbing Mount Kailas is forbidden (the only person to have ever been atop the sacred mountain is Milarepa, a 11th century Tibetan Buddhist yogi).

Long before Buddhism took root in Tibet in the 7th century Kailas was venerated by the adherents of the Bön (or Bnpos or Bönpos), the indigenous, religion of the region who maintained that the mystic region around Mt. Kailas and the Nine-Story Swastika Mountain was the seat of all power. When viewed from the south face, a swastika can indeed be seen. According to Bön accounts, while the circumambulation is made (anticlockwise, whereas followers of the other religion walk in the clockwise direction) 18 powerful and enlightened teachers will appear in this eon including Tnpa Shenrab, the most powerful of them, the founder of the Bön religion. He is said to have been born in the mythical land of Olmo Lung Ring, whose location remains something of a mystery. The land is traditionally described as dominated by Mount Yungdrung Gu-tzeg (edifice of nine swastikas), which many identify as Mount Kailas.
Legends of a mythic land were spread throughout the centuries and became of interest to philosophers, adventurers, theologists and even… political leaders! It received many names: Shambhala, Shangri-La, etc., and many locations have been suggested: the Tibet plateau, the Gobi desert, the Altai, but the Mount Kailas range is most frequently named.

There must be existence of the super-natural in whatever form – higher intelligence, power, or energy.
This interest remains strong to this day in many countries, to find this axis mundi, the most powerful place, the highest power, or the hidden intelligence in whatever form it exists, if indeed it does.
Nor should one ignore recent Russian studies of Tibet and the Kailas range in particular, the results of which, if true, could radically alter our thinking on the growth of civilizations. One of the ideas the Russians have put forward is that Mt. Kailas could be a vast, human-built pyramid, the centre of an entire complex of smaller pyramids, a hundred in total. This complex, moreover, might be the centre of a world–wide system connecting other monuments or sites where paranormal phenomena have been observed.
The idea of the pyramid in this region is not new. It goes back to the timeless Sanskrit epic of the Ramayana. Since then, numerous travellers, especially in the beginning of the 20th century, have expressed the view that Mt.Kailas is too perfect to be a totally natural phenomenon, or at any rate give the appearance of human intervention.

In shape it (Mount Kailas) resembles a vast cathedral… the sides of the mountain are perpendicular and fall sheer for hundreds of feet, the strata horizontal, the layers of stone varying slightly in colour, and the dividing lines showing up clear and distinct…… which give to the entire mountain the appearance of having been built by giant hands, of huge blocks of reddish stone.

The Russian claims to have discovered in the Mt.Kailas area the highest ever human-built pyramids were denied three years later by Chinese scientists in the official Chinese Press.
Of human construction or not, Mt. Kailas is one of the most mysterious, secret and at the same time one of the most holy and sacred mountains of Asia, if not of the world) the circumambulation of which has for many centuries or possibly many millennia remained a vital pilgrimage, symbolising the life’s stages of death, purification and rebirth. Buddhists and Jains refer to the circumambulation as khora, Hindus as parikrama. A single circumambulation equals one turn of the Wheel of Life and will wipe away the sins of one’s life, twelve circumambulations will purify one’s karma for all past and future lives, enlightenment is attained after 108. Even one khora presents an extremely difficult task since the mountain is difficult of access and dangerous.
Dangers or not, some of us may dream of discovering for ourselves what there is to be seen on this mountain.