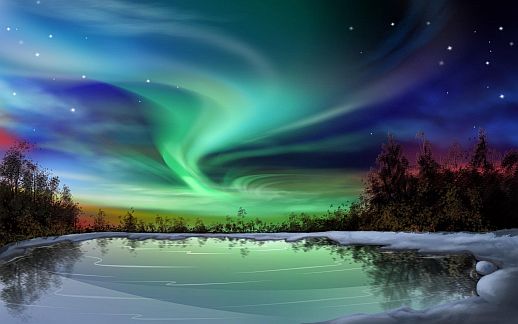 Ramayana, believed to have happened almost 2 million years ago on earth, was written by sage Valmiki and it describes almost entire geography of earth in all directions.
In Kishkinda Kanda episode of Ramayana, Vanara king Sungreeva’s plans to send 4 teams in 4 directions to find Seetha, who was kidnapped by Ravana (revealed later).
At that point of time, they had no idea in which direction she must have been taken.

One such team headed from Jambudwipa (India) towards the North is given a route-map by Sugreeva, which would lead them right across the mountains of China, the plateau of Mongolia, Lake Baikaal of Siberia and then the path along the Angara River northwards to the Kara Sea of the Arctic Ocean where the search is supposed to end.
These ‘vanaras‘ are instructed to travel right up to ‘Northern Lights or Aurora Borealis‘ of Siberia and the Arctic Ocean.

Sugreeva mentions the key landmarks in this direction as mountains, lakes and rivers.
Three mountain peaks of the Himalayas are mentioned, the Kala, Sudarshana and the Devasakha.
Across these peaks, Sugreeva describes a vast expanse of barren plain land, crossing which they shall see Mt. Kailash.
The vast expanse of land as the plains of Tibet, and the location of Mt. Kailash matches geographically today.

Sugreeva tmentions the huge mansion of Kubera built on Mt. Kailasa constructed by the celestial architect Viswakarma. Researchers from Russia and ‘Ancient Alien Theorists‘ have already put forth the view that Kailash is no ordinary peak, that it may have been an ancient nuclear energy generation plant, as were many ancient pyramids of the world.
Russian scientists believe that there may have been a complex of about 100 pyramids, used for power generation in the Himalayan mountains. 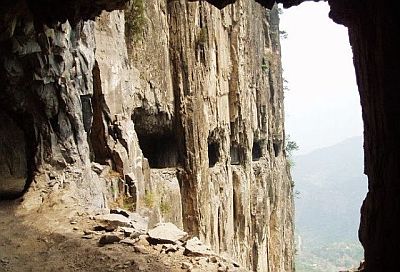 Sugreeva instructs them to move further ahead. He gives them three more mountain peak landmarks. First mentions Mt. Krauncha with a highly impassable tunnel. Like Shiva is said to have brought down the Ganges on to earth (plains of India) from the heavens (Himalayas), his son Skanda is credited with having chiseled a tunnel through Mt. Krauncha.
One of the best known ancient tunnels in China is the Guolinag Tunnel in the Taihang Mountains.
Until 1972 only an ancient path chiseled through the rocks of this mountain linked the villages in the area to the outside world.
In 1972 locals took 5 years to improve the ancient path.

Path that Valmiki chalks out is from Kailash (in the Himalayas) to Krauncha (in the Taihang Range), and he says there are many other mountain peaks – namely the ‘treeless‘ Mt. Kaama and the ‘abode of birds‘,Mt. Maanasa, on the way. 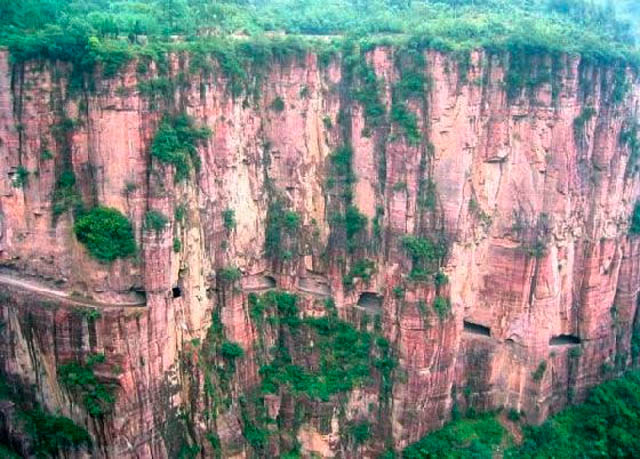 Sugreeva instructs them to scour these mountains thoroughly for Seetha. These are the mountains of the Qinling Range which falls between the Himalayas and the Taihang Mountains as the ‘vanaras‘ move in the north-east direction from Kailash.
The two highest peaks, and therefore most visible, in this chain are the Tuanjie and the Taibai. It is possible that the Ramayana was referring to these two (Kaama and Maanasa).

Sugreeva mentions another peak called Mt. Mainaaka, which is identified by ‘a massive mansion built by demon architect by the name ‘Maya‘.
Sugreeva mentions the next landmark as he says that after crossing over a vast province, the ‘vanaras‘ would arrive at a large lake by the name ‘Vaikhana‘.
Travelling North of China, crossing the Mongolian province or plateau, one would arrive at the eastern tip of Lake Baikal in Siberia. This ‘Vaikhana‘ could be the ‘Baikaal‘ lake of Siberia.

Next ahead is at the other (Western) end of Lake Vaikhana, is a river by the name Shailoda, and if the ‘vanaras’ were to follow its path northward, across many miles ‘they would reach the Northern Ocean’. This is indeed true. Shailoda has been identified as the present day Angara.
This River ‘Angara’ flows from the western tip of lake Baikaal and after many miles falls into the Kara Sea of North Arctic Ocean. (Like their ancient names ‘Vaikhana‘ and ‘Shailoda‘ mentioned in the Ramayana, their present names ‘Baikal‘ and ‘Angara‘ too are of Sanskrit origin.
Ancient Indian texts refer to Siberia as Uttara-Kuru. ‘Uttara‘ means ‘North‘, ‘Kuru‘ is the name of the Indian tribe that had traveled north from Kuruvapur (on Krishna river in Andhra Pradesh/Karnataka Border in India) and ruled Indraprastha (near present Delhi) during Mahabharata era.
‘Kara‘, the name of the Sea into which the Angara River falls, is most likely a distortion of the ancient Sanskrit name ‘Kuru‘. 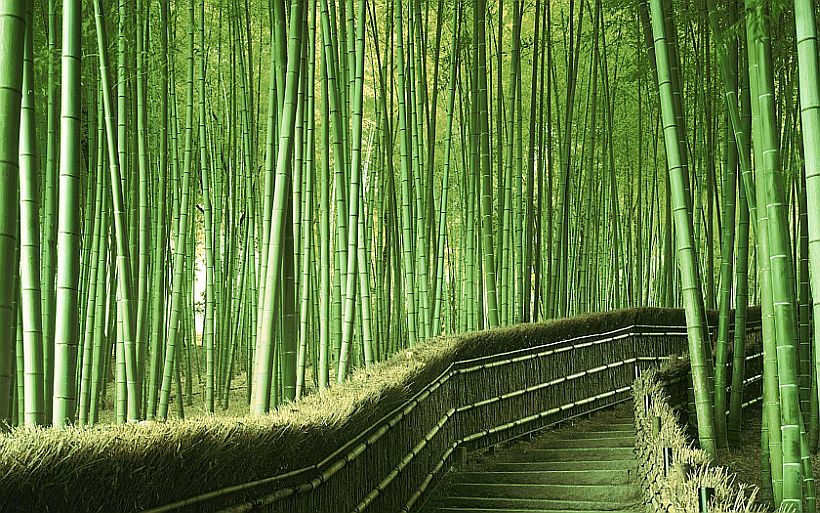 Sugreev also advises the ‘vanaaras‘ to cross Lake Baikaal with the help of the ‘keechaka‘ (Bamboo) that grows there. This has reference to the ‘Siberian Bamboo Grass‘ which was used by the locals to cross the lakes and water odies in this region.

Finally, Sugreeva mentions the ‘Northern Lights or Aurora Borealis‘ which will become visible as Vanaras move northwards from Lake Vaikhana.
In Section 43, Verse 36 of Kishkinda Kand, Valmiki writes : “Going beyond that expanse of water, you will come upon a sky, which even when devoid of the stars or the moon or the sun is illuminated by rays, as if there is light emitting from the self-luminous, god-like sages who repose there“.
Valmiki equates the light of ‘Northern Lights or Aurora Borealis‘ to the ‘light that emits from sages who have attained ‘siddhi‘. 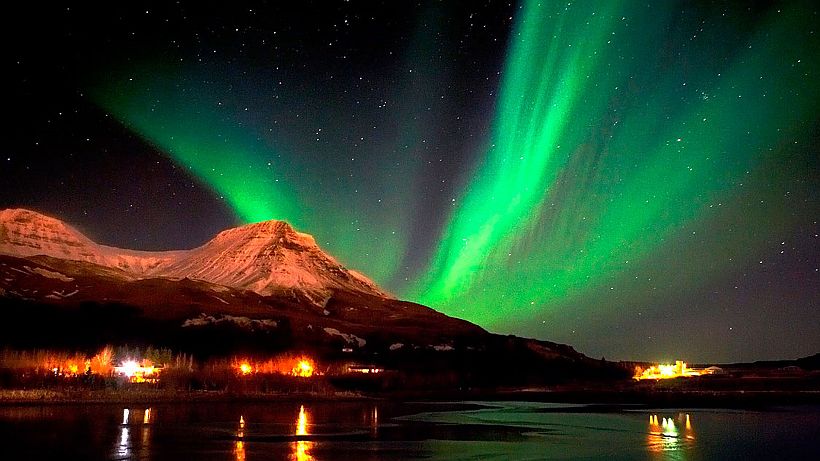 In northern latitudes, the effect is known as the aurora borealis (or the northern lights), named after the Roman goddess of dawn, Aurora, and the Greek name for the north wind, Boreas, by Galileo in 1619.
Auroras are associated with the solar wind, a flow of ions continuously flowing outward from the Sun. The Earth’s magnetic field traps these particles, many of which travel toward the poles where they are accelerated toward Earth. Collisions between these ions and atmospheric atoms and molecules cause energy releases in the form of auroras appearing in large circles around the poles. Auroras are more frequent and brighter during the intense phase of the solar cycle when coronal mass ejections increase the intensity of the solar wind.
Auroras result from emissions of photons in the Earth’s upper atmosphere, above 80 km (50 mi), from ionized nitrogen molecules regaining an electron, and oxygen atoms and nitrogen molecules returning from an excited state to ground state.

The last landmark mentioned in Uttara-Kuru is Mt. Soma, which has to be one of the peaks of the Urals.
The highest peak in the Urals is the ‘Narodnaya‘ – which in the local language means ‘Mountain of the People‘. In Sanskrit too the word has the same meaning- ‘nara‘ means ‘people‘ and ‘udaya‘ means ‘elevation‘.