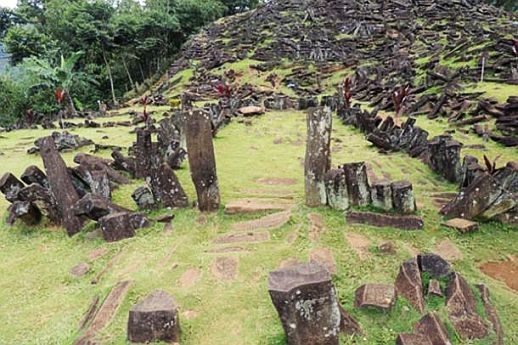 Near a small village called Karyamuki, 120 kilometers south of Jakarta, Indonesia, lies archaeological site with largest number of megaliths in the country.
The Gunung Padang megalithic site is estimated to be atleast 9000 to even 20000 years old which defies conventional perspectives regarding the history of Indonesia, and also the world.

This is Indonesia’s oldest and most important prehistoric landmark, and most of the 100-metre hill, upon which hundreds of megalithic stones are scattered, is actually man-made, built up on several stages over thousands of years by different cultures. 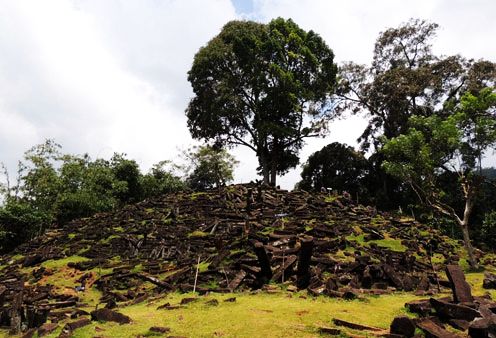 These megalithic stones are meticulously layered and arranged by columnar jointing, with each stone varying in size.
Aarrangement of the rocks and stones that are usually found upright have been laid horizontally on beds of gravel.
Some are stuck together by an ancient form of glue and below the piles of stones is evidence of rooms, internal steps and terraces, all evidence of massive building, of human intelligence and planning.

This site was constructed in orientation to the stars and the Sun.
Without knowledge of Astronomy, a primitive man cannot construct a complex structure like Gunung Padang Megalithic Site.
So, there must be some missing history and it makes us change our beliefs.

This prismatic structure is a stepped pyramid that has an area of 3,094 square meters consisting of five levels.
It stands more than 100 meters high and is the centre of a 25-hectare megalithic site around.