Magnetic Hill in Ladakh India is a Gravity Hill which is is mistakenly considered to have magnetic powers that can attract or pull a vehicle towards it. 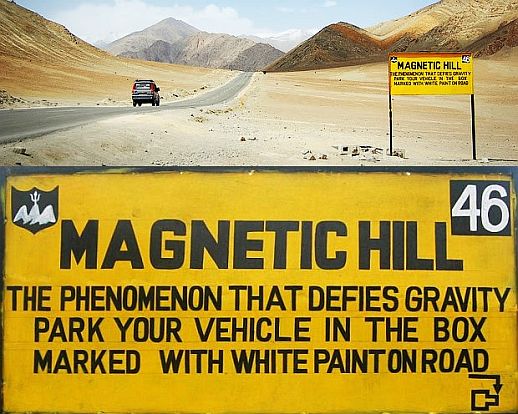 This Magnet Hill is located on the Leh-Kargil-Srinagar national highway, about 50 km from Leh, at a height of 11,000 feet above sea level.
On its south side flows the Indus, which originates in Tibet and goes to Pakistan.
There is strong belief that this hill pulls cars uphill and force passing aircrafts to increase their altitude in order to escape magnetic interference.

This is because of the illusion that some people see of objects which appear to roll up a hill.
In reality, this is purely an optical effect caused by the specific layout of hills and deceptive fields of reference.

A Magnetic Hill in Orroroo, South Australia is also a similar spot which produces the optical illusion that a very slight downhill slope appears to be an uphill slope. Thus, a car left out of gear will appear to be rolling uphill against gravity.
The slope of gravity hills is an optical illusion, although sites are often accompanied by claims that magnetic or even supernatural forces are at work. The most important factor contributing to the illusion is a completely or mostly obstructed horizon; without a horizon, judging the slope of a surface is difficult as a reliable reference is missing. Objects one would normally assume to be more or less perpendicular to the ground (such as trees) may actually be leaning, offsetting the visual reference.

The illusion is similar to the Ames room, in which balls can also appear to roll against gravity.
The opposite phenomenon – an uphill road that appears flat – is known in bicycle racing as a “false flat.”