The Racetrack Playa, or The Racetrack, is a scenic dry lake feature with “Sailing Stones” or “Sliding Rocks” that inscribe linear “Racetrack” imprints. It is located above the northwestern side of Death Valley, in Death Valley National Park, Inyo County, California, USA. 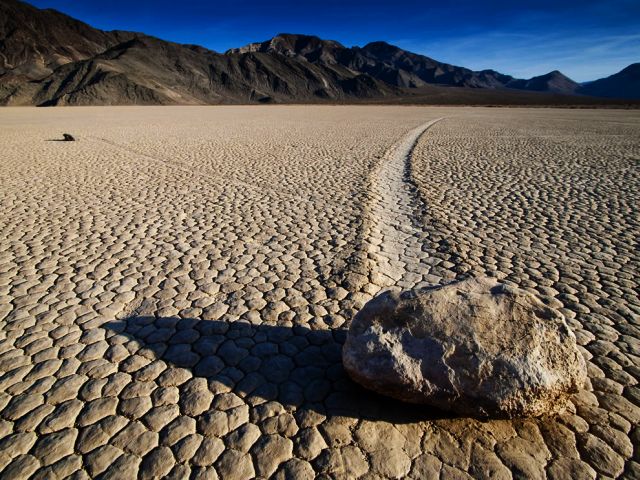 One of the most interesting mysteries here is the sliding rocks at Racetrack Playa (a playa is a dry lake bed).
These rocks can be found on the floor of the playa with long trails behind them and slide across the playa, cutting a furrow in the sediment as they move.
Some of them weigh several hundred pounds and how to they ‘slide‘ is a mystery unknown.
Racetrack playa is lake bed that is almost perfectly flat and almost always dry. It is about 4 kilometers long (2.5 miles – north to south) and about 2 kilometers wide (1.25 miles – east to west).

The surface is covered with mudcracks and the sediment is made up mainly of silt and clay.
The climate in this area is arid. It rains just a couple of inches per year. However, when it rains, the steep mountains which surround Racetrack Playa produce a large amount of runoff that converts the playa floor into a broad shallow lake. When wet, the surface of the playa is transformed into a very soft and very slippery mud.

These rocks might have slided during times when the floor of Racetrack Playa is covered with a very soft mud.
However, lack of disturbed mud or footmarks around the rock trails eliminates the possibility of a human or animal pushing or assisting the motion of the rocks.
There are strong wind gusts in this region, which are believed to nudge the rocks into motion. 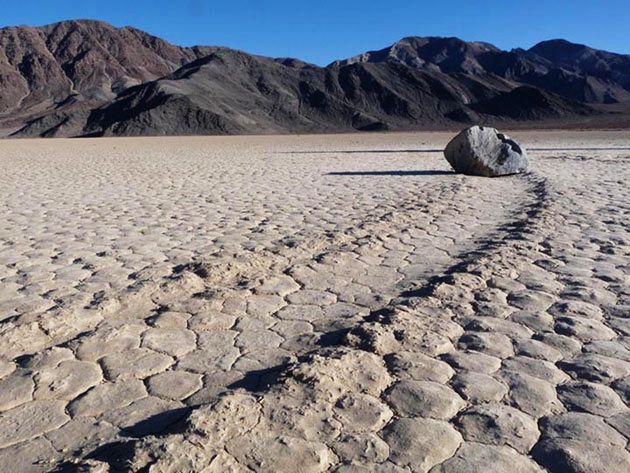 Racetrack is dry for almost the entire year and has no vegetation. When dry, its surface is covered with small but firm hexagonal mud crack polygons that are typically 3 to 4 inches (7.5 to 10 cm) in diameter and about an inch (2.5 cm) thick. The polygons form in sets of three mud cracks at 120º to each other.

The playa is in the small Racetrack Valley endorheic basin between the Cottonwood Mountains on the east and Nelson Range to the west. During periods of heavy rain, water washes down from the mountains into the playa, forming a shallow, short-lived endorheic lake. Under the hot desert sun, the thin veneer of water quickly evaporates leaving behind a surface layer of soft slick mud. As the mud dries, it shrinks and cracks into a mosaic pattern of interlocking polygons.
The shape of the shallow hydrocarbon lake Ontario Lacus on Saturn’s moon Titan has been compared to that of Racetrack Playa.

The tracks caused by ‘saling stones‘ have been observed and studied since the early 1900s, yet no one has seen the stones in motion. Racetrack stones only move once every two or three years and most tracks last for three or four years. Stones with rough bottoms leave straight striated tracks while those with smooth bottoms wander.
NASA’s team could not find a reason for this sliding as there was no witness who say them slide.

It is even speculated that ice collars form around rocks and when the local water level rises, the rocks are buoyantly floated off the soft bed. The minimal friction allows the rocks to be moved by arbitrarily light winds.

It was even reported that park officials are looking in to the theft of several of the rocks.