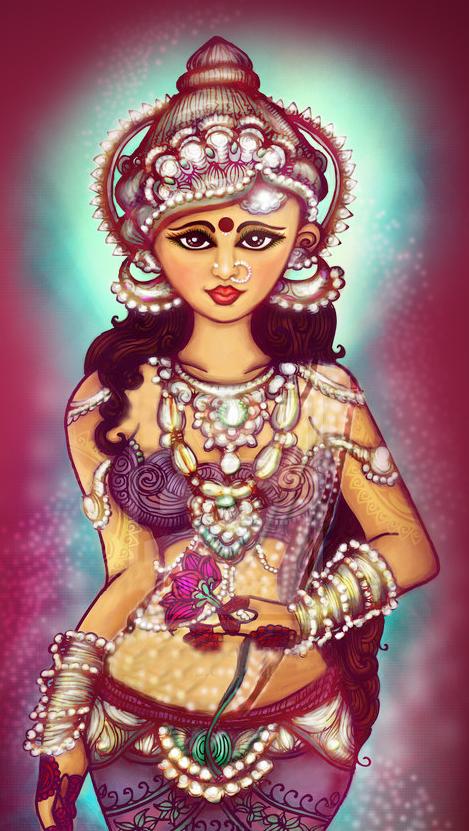 Aśoka Sundarī), also spelt as Ashoka Sundari is mentioned as daughter of Lord Siva and Goddess Parvati in Padma Purana.
After both her sons Ganesh and Shanmukha grewup and left Kailasa, parvati was feeling loneliness and immense grief.
Once she requested Siva to take her to the most beautiful garden in the world. Siva took her to Nandanvana, where Parvati saw a tree known as Kalpavriksha which could fulfil any wish.
As she wanted a daughter now, her wish was granted and a beautiful girl was born.
She was named Asoka Sundari by Siva, because she removed Soka (grief) of parvati and she was also beautiful (Sundari).

Parvati promised to her daughter that she would marry Nahusha of the lunar dynasty, who would be equal to Indra, the king of heaven.
This Nahusha once replaced Indra but was cursed by Sages for his arrogance.
He fell on to earth as a python and waited to Yudhishtir to come and relieve him from curse during Mahabharat Era.

Once, Asoka Sundari was roaming in Nandanvana with her maids, a rakshasa (demon) called Nighunda saw her and fell in love with her.
However, Asoka Sundari rejected the advances of the demon and informed him about her destiny to marry King Nahusha.
Nighunda disguised himself as a widow, whose husband was killed by him, and asked Asoka Sundari to accompany her to her hermitage.
She went with the disguised demon and reached his palace, where she came to know of his treachery and cursed him to be killed by Nahusha and escaped to her parents’ abode Kailasa.
Nighunda plans to kill Nahusha before he grows up and becomes eligible to marry Asoka Sundari.
He kidnaps the infant Nahusha from his palace, however he is rescued by a maid of Nighunda and kept under the sage Vasistha’s care.

After few years Nahusha grows up and understands about his destiny to kill the Rakshasa.
Nighunda abducts Asoka Sundari and tells her that he had killed Nahusha.
She was consoled by a Kinnara couple who informed her of Nahusha’s wellbeing and prophesized that she would mother a powerful son called Yayati and a hundred beautiful daughters. Nahusha fought Nighunda and defeated him after a fierce battle and rescued Asoka Sundari, whom he married.

Siva is said to have few more daughters like Manasa, Jyoti, Ekaveera etc in other folklore tales, but none specifically mentioned in Puranas.