Sea Monster is Ramayana is Surasa, who tries to block path of Hanuman during his travel to Lanka.
Also, Bhagavata Purana mentions Sea Monsters along with their living places, sizes etc.
In Sanskrit ‘Makara‘ means ‘sea dragon’ or ‘aquatic-monster‘.
The zodiac sign Makara (Capricorn) is shown as an aquatic animal with aggressive RAM like head with horns and crocodile body.
It is not the Alligator or Crocodile we see today.

It is described in folklore and mythology of many countries like India, Nepal, Sri Lanka, Burma, Thailand, Cambodia, Malaysia, Indonesia, Vietnam, China and Japan.

Makara, is also shown as carrier of Ganga, the river and also of the sea god Varuna.
Kamadeva or Manmadha (Cupid)’s flag is called makara-dhwaja, a flag having the Makara drawn on it.
Mahabharata mentions the Timingila and Makara as being deep within the ocean, along with other huge sea creatures.

Transaltion : There were seen Timingilas, tortoises, Timi-timingilas and Makaras, that were like great rocks submerged in the water.” (Mahabharata, Vana Parva. 168.3)

Susruta Samhita, the ayurvedic text from 6th century BCE also lists the Timingila and Makara as being amongst the formidable species of aquatic life.

In Bhagavata Purana, Makaras and Timingila are described as predators, attacking Markandeya Rishi

Translation : Suffering from hunger and thirst, attacked by Makaras and Timingila and battered by the waves and the wind, Markandeya wandered through the infinite gloom that enveloped him. Overcome by exhaustion, he lost all sense of direction and could not ascertain what was the sky and what was the earth.” (Bhag. 12.9.16)

Bhagavad-gita mentions the Makara in Verse 31, Chapter 10 as follows:

Translation : Of purifiers I am the wind. Of the wielders of weapons I am Rama. Amongst aquatics I am the Makara and of rivers I am the Ganga. says Krishna about himself to Arjuna.

In Vedas and other puranas, Makara is described as an aggressive aquatic dragon with mouth of a crocodile, the body of a fish, the tail of a peacock and the paws of a panther.
The Pilosaurus found in England during 2003, is a close resemblance to Makara.

Translation : O King, some soldiers fought on the backs of vultures, eagles, ducks, hawks and bhasa birds. Some fought on the backs of timingilas, which can devour huge whales, some on the backs of sarabhas, and some on buffalo, rhinoceroses, cows, bulls, gavaya [jungle cows] and arunas. Others fought on the backs of jackals, rats, krkalasa, rabbits, human beings, goats, black deer, swans and boars. In this way, mounted on animals of the water, land and sky, including animals with deformed bodies [vikrta-vigraha], both armies faced each other and went forward.” (Bhag. 8.10.10-12 – The Battle Between the Demigods and the Demons)

Krkalasa, bhasa, sarabhas, timingila, gavaya, arunas etc cannot be described in english as they have no equivalent terms.
Sarabha, is a gigantic eagle form with lion claws(feet), which is described as Incarnation of Siva.
Vikrta-vigraha translates as ‘animals with deformed bodies’ and krkalasa translates as ‘big lizard’ (Dinosaur).
Bhagavatam also describes few instances where the term Makara are used.
Lord Krishna is said to be wearing Makara-Kundala (Sea Monster shaped Ear Rings) [Bhagavatam, canto 10, Chapter 73.
Similar description is given of Vishnu in canto 12 chapter 11 and canto 5 chapter 26 too (Raurava and Maharaurava, which are great Sea Monsters).

Sea Monster found on the shoreline of Sakhalin Island, Russia

Scientists are yet to identify a pre-historic monster found on the shoreline of Sakhalin Island, Russia.
This place is actually more closer to USA.
There appears to be thick long hair hanging off the creature’s remains, which puzzled marione biologists.

There are multiple instances of Sea Monsters caught in present generation.
One such is the Giant whale like monster caught in Vietnam.
Look at the video below to understand its gigantic size.

Few years back, a gigantic 40 feet long, 50000 pounds weighing whale-shark was caught in shores of Pakistan, which again proves the point that Giant Sea Monsters do exist even today.

Surasa, The Sea Monster in Ramayana

Ramayana descrbes, Surasa the Sea Monster who blocks Hanuman while travelling to lanka.

Translation : Thereafter, I saw Surasa, the mother of serpents in the midst of the sea. That goddess spoke the following words to me.
“O excellent of Vishnu-followers! The celestials have shown you as my eatable. Therefore, I will eat you since you have been bestowed to me by gods after a long time.” 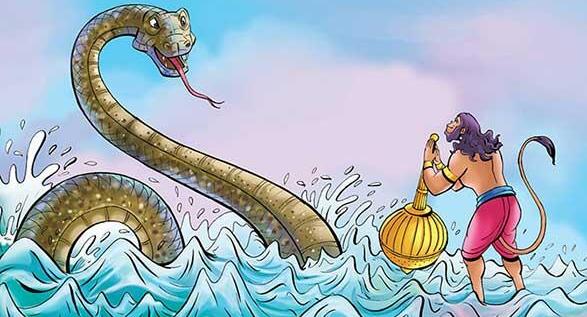 Then Hanuman says “I stood there, offering salutation with my joined palms to her. Becoming pale-faced, I spoke the following words: Rama, the son of Dasaratha the splendid man and the tormentator of enemies, together with Lakshmana, his brother and Seetha entered the forest of Dandaka. ‘The evil-minded Ravana took away Seetha, Rama’s wife. By the orders of Rama, I am going to her as an envoy.’ ”

“‘You, abiding in Rama’s country, ought to do a help to Rama. Otherwise, after seeing Seetha and Rama, who is unwearied in action, I will come to your mouth. I am thus promising you in truth. Hearing my words, that Surasa who can assume any form at her will said: “No one can violate me by unfaithfulness. I have this boon with me.

“Hearing the words of Surasa, I, as tall as ten Yojanas (eighty miles), within a moment, grew half as much in size (fifteen Yojanas or one hundred twenty miles). She opened her mouth so wide as to correspond to the size of my body. Seeing her expanded mouth, I assumed a dwarfish form. At that moment, I still became reduced to the size of a human thumb. After entering her mouth quickly, I then came out instantly. The divine Surasa, in her native form, spoke to me again, as follows:

” ‘O gently ! O the foremost among vanaras! Go happily for the fulfillment of your purpose. Bring back Seetha to the magnanimous Rama. O mighty armed monkey! Be happy. I am pleased with you. Then, all living beings praised me! Saying Good! Well done! Bravo!

Also, Hanuman’s son Makaradhwaja, is said to have born to a sea monster, which is a Makara.