Valmiki Ramayana mentions a scene in Ayodhya Kanda, where Kaikeyi reveals about the boons that Dasaratha had given her earlier and also her wishes of coronating Bharatha instead of Rama and sending him to forest.

Listening to her harsh words, Rama decides to obey father’s granted boons. Dasaratha gets disturbed.
Rama asks Kaikeyi why his father did not speak to him directly about the matter.
He then leaves to inform about this to his mother Kausalya and wife Seetha.
Kausalya is left in grief, while Lakshmana gets angry on Kaikeyi and his father.
Rama shocks Seetha by revealing about his decision to leave for forest.
Seetha expresses her wish to follow him, while Rama warns her of dangers in forest.
Seetha reveals that, before her marriage, she heard through few astrologers that she has to live in forests for some time in future.
Rama tried to convince her that rendering service to elders by staying back at home is advisable for her, but in vain.
Finally Rama yields to her prevail and asks her to donate personal belongings before leaving Ayodhya.

Lakshmana too convinces Rama by explaining that in past, both were allowed to be in forest while protecting Brahmarshi Viswamitra’s yagna.

Finally Rama along with Seetha and Lakshmana prepare to leave Ayodhya.
In a final attempt, minister Sumantra requests Queen Kaikeyi to take back her impositions.
Even the elderly minister and a scholar named Siddhartha tries to pacify Kaikeyi by telling the legend of Sagara, the ancestor of Dasaratha, quoting the exile of his notorious son Asamanja.
But she is adamant to all holy advices and wants Rama to leave for forests.
In past, Emperor Sagara abandonded his son Asamanja for his evil deeds such as kidnapping children on streets of Ayodhya and throwing them into Sarayu river for fun and watch them drown.
When people of Ayodhya complained about him and said, either his son or they should leave the city, Sagara decided to thrown him out of his kingdom.

Translation : Rama convinces everyone that he will go to forest for 14 years and asks for a showel and basket (to dig up and collect vegetables that grow with roots).

Translation : Thereupon, Kaikeyi shamelessly bringing personally in a gathering of men, said to Rama; “Put these on”

Translation : Taking those two pieces of bark (as loin cloth and cover) from kaikeyi and discarding his clothing of fine yarn, Rama put on the garb of ascetics.

Lakshmana too discards his silk raiment and puts on bark clothes.
Seeing them, Seetha looks at piece of bark intended to be worne by her and felt alarming as a deer would on seeing a snare (set for entrapping).
“How ascetics residing in the forest wear this piece of bark?” Thus saying, Seetha who was not adept in wearing the bark of trees, erred again and again, in her attempt to wear it.
Keeping one piece of bark on her neck as well as holding it with her hand, Seetha stood abashed, not adept as she was in wearing it.
Rama quicky came and personally fastened that bark over the sild garment of Seetha.
Seeing this, women in fort shed tears.
They tried to convince Rama to leave back Seetha in fort and go along with Lakshmana.
Seeing all this, Brahmarshi Vasistha the king’s preceptor spoke to Kaikeyi.

Translation : Oh the evil minded Kaikeyi, who have exceeded your limits, who have brought disgrace to your family! You are not establishing justifiable standard and you misled the king.

Translation : Oh, the woman without decorum! Seetha the princess shall not proceed to forest. She will occupy the throne, which was awarded to Rama.

Translation : A wife is very self to all, who constantly care for their wives. As Seetha is Rama’s self, she can rule the earth.

He also says that “If Seetha, who is qualified to rule as a Queen of Ayodhya, also leaves for forest, we along with entire city will follow her.
Wearing pieces of bark, Bharata along with Satrughna will also move to forest.
Where there is no Rama, there will be no Ayodhya or kingdom. Forest itself will become his kingdom.
You alone with your bad conduct, rule this earth which is bereft of people and desolate, with its trees alone remaining.
If Bharata is born to king Dasaratha, he is not fit either to rule the earth that is not being offered by his father nor to live as a son in your case.
Moreover, putting aside the bark of trees, give excellent jewellery to your daughter-in-law, Oh, Kaikeyi! the bark of trees is not ordained for her” Thus saying so, Vasishta prevented that wearing of garment by Seetha.
“It was solicited by you, the dwelling in the forest of Rama only. Let Seetha, to be decorated daily, be adorned with ornaments and live in the forest along with Rama” said Vasishta.
But Seetha follows her husband and changes in bark clothes.

Even today few tribes like Batwa in Africa, wear clothes made from tree barks. 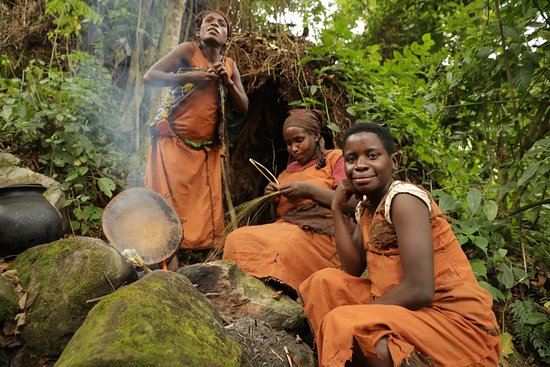 It was normal for rishis, their families to wear clothes made from tree barks while living in forests.

Vasishta makes a point here that a woman, who is wife of Prince or King is fit to sit on throne and rule in absence of her husband.
Which means that there were women who ruled kingdoms prior to Seetha.
Rig Vedic Women in India enjoyed high status in society.
Vedas and Puranas equated women with property.
Ancient India had many learned ladies. There were two types of scholarly women — the Brahmavadinis, or the women who never married and cultured the Vedas throughout their lives; and the Sadyodvahas who studied the Vedas till they married.
Panini mentioned of female students studying Vedas.
Katyana called female teachers Upadhyaya or Upadhyayi.
Sundara Kanda in Ramayana also mentions that Seetha did Sandhya Vandanam.

Megasthenes mentioned the Pandya women running the administration.
Satavahana queen Nayanika ruled the kingdom on behalf of her minor son.
Kashmir had a queen Yasovati during Mahabharata era. The trend continued in Andhra and Odisha too.
Vijaybhattarika acted as the provincial ruler under the Chalukya King, Vikramaditya I.
Women were provincial and village administrators in the Kannada region.
There were many Indian women rulers during past 1000 years, including Rudrama Devi till Jhani Lakshmi Bai.

Rig Veda mentions about queen Visphala who fought a war on behalf of her husband with prosthetic leg.
Khela was a king; Agastya was his purohita. Through his prayers the Aswins gave Vispala a metallic leg.

“Sodao janghamaysing vishapalaoi dhana hite sterba pratyadhattyam” – Rig-Veda- 1:116:15
The foot of Vispala, the wife of Khela, was cut off, like the wing of a bird, in an engagement by night.
Immediately you gave her a metallic leg, so that she might walk.