Fire is estimated to be used by various species of Hominids, about 1.5 million years ago.
Later, Fire provided protection from predators, it facilitated the conversion of forests into fields, helped bake utensils and forge tools.
Fire also let humans cook food and make it more edible, a feat which led to various modifications including some in our anatomy. 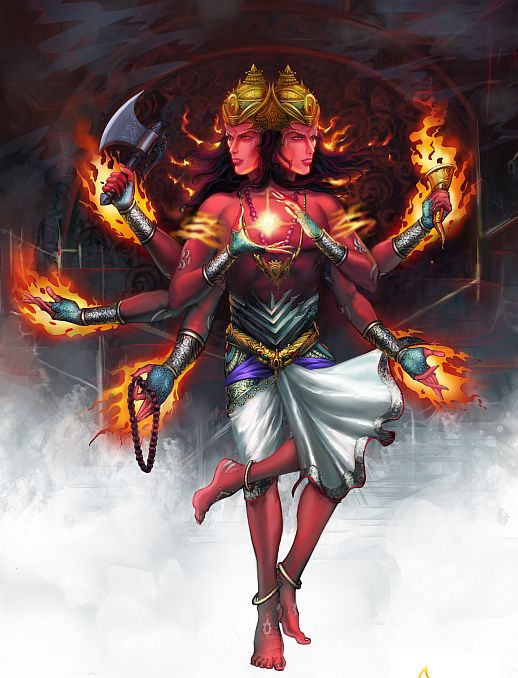 As human diet became easier to chew and swallow, our tooth size decreased and jaws became less prognathic or ape like. There was also the shift from eating-in-the wild to eating-in-the-kitchen which further strengthened the community bond among humans.
Out of all 5 major forces of nature (Pancha Bhootas), Fire helped man evolve more.

Agni (Sanskrit: अग्नि) is a vedic deity and the god of fire, who is also the acceptor of sacrifices, because he is treated as messenger to gods.
Igniting fire-lamps forms an integral part of vedic rituals like prayers at home or temples. 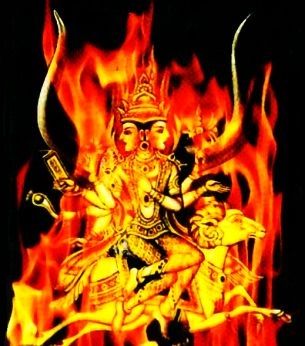 Fire is also used in Yagnya, as witness for marriages (couple taking seven steps around fire), celebrating festivals by lighting lamps (like deepavali).
Rig-Veda, places Agni second only to Indra in importance and we find 1/5th of Rig Vedic Hymns dedicated to the Fire-god (Agni Dev).
In fact, the very 1st verse of the Rig-veda is dedicated to Agni:

Translation : Agni I laud, the High-priest, Invoker, Minister of Sacrifice, Deva and Bestower of Wealth.

Agni is described as the son of Dyaus Pita and Prithvi Mata and hence Indra’s twin, both of them performing complimentary functions. While INDRA transmits energy to the Earth in the form of his thunderbolt, AGNI takes energy from the Earth to the Heavens in its swirling smoke.
Rigveda also mentions that ‘Agni dwells in the waters‘ and may even be born from it !
That means vedas have described about volcanoes in oceans, natural gas surfacing through waters, electricity produced from water etc.
Vedas described 10 types of fire :
1. Regular Fire
2. Sacrificial Fire produced by rubbing the fire-sticks (Arani or Idhma)
I3. nitiation Fire at Upanayana ceremony of a child coming of age
4. Fire kept in the house for Domestic rituals
5. Fire spread by Lightening
6. Fire in the Sun
7. Southern Fire for ancestors
8. Funeral Fire used for cremation
9. Digestive Fire (Jatharagni) inside stomach, and the last but most potent of all
10. Destructive Fire or Davagani that initiates the process of Maha-pralaya (End of the World).

In Ayurveda, Agni is the first guardian of health and manifests through “Jatharagni”, the digestive fire. Every time we eat, we are in a sense making an offering to the digestive fire and these offerings are transformed into nutrition or Prana for the body.
Agni is also appointed as one of the Ashta-digpalakas (8 rulers of directions) and is the guardian of the South-East direction.
His wife is Svaha and his sons are Pavak, Pavaman, and Suchi, who according to the Vayu Purana, stand for Electric fire, the fire produced by Friction, and the Solar fire respectively.
Svaha‘s name is mentioned each time an offering is poured into the sacrificial-fire.

A messenger of Surya, Matariswan (identified in the Upanishads as Vayu/Wind God) who brought the secret of controlling Fire down from the Heavens and gave it to the ancient Bhrigus for safe-keeping. 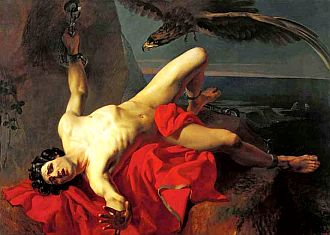 Greek myth of Prometheus is also a similar story where fire was stolen from the King of Gods Zeus and given to Man.
As a punishment, Zeus chained the Titan to a rock on the Caucasus mountains where the giant eagle Ethon would eat at his Liver everyday !

Only similarity it has with vedic legend is that Fire came from gods to man.
Prometheus story is in contrast with vedic story as it describes about stealing fire and getting punished, whereas in vedic legend, Gods themselves send Fire for the benefit of Humans.

In Native American traditions, Fire is the eldest family member and ancient dwelling of Spirit.