Aurangzeb, the 6th Mughal Emperor who destroyed multiple hindu temples, could not touch one Hanuman Mandir during his reign.
Abul Muzaffar Muhi-ud-Din Muhammad Aurangzeb (3 November 1618 – 3 March 1707 CE) was the third son and sixth child of Shah Jahan and Mumtaz Mahal.
He was born when his father was governer of Gujarat.
Aurangzeb was well known for his rejection of pluralism and expansion of Islam by force.
His father appointed him as viceroy of the Deccan in 1636 CE and he brought the Nizam Shahi dynasty to an end.
After multiple confrontations with his elder brother Dara Shikoh, Aurangzeb took control over army and ordered on 10 August 1659, Dara was executed on grounds of apostasy.
Aurangzeb was crowned Sultan and he started expanding his kingdom along with religion. 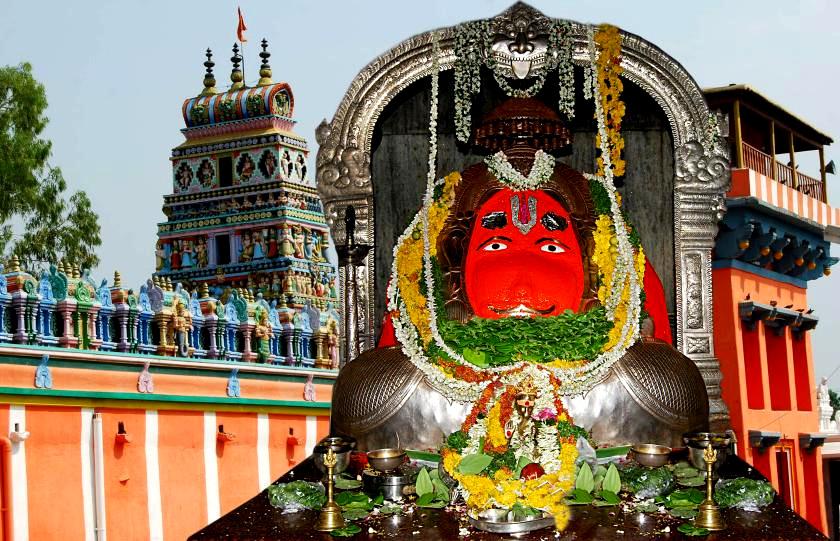 During late 12th century, a commander-in-chief of Kakatiya Dynasty went for hunting and rested under a tree in a forest.
He could hear the chanting of Raam and when searched, found stone idol of Lord Hanuman, in seated posture.
Same night, Lord Hanuman appeared in his dream and asked him to construct a temple at same spot.
The temple was built and maintained by successive kings.

In January 1687, Aurangzeb led his grand Mughal army against the Deccan Qutbshahi ruler taking refuge in Golconda Fort. Aurangzeb had surrounded Golconda Fort and alongside about 100 Cannons began siege operations.
During his operation, his forces were also ordered to distroy any hindu temple on their way.
But, his army could not even step into the compound wall of this Hanuman Temple.
When the general reported this to Aurangzeb, he himself went with a crow bar to break down the temple.
At the threshold of the temple, he heard a deafening roar rumbling like thunder, and the crowbar slipped from his hands as he was shaking in fear. Then he heard a voice in the heavens “Mandir todna hai rajan, to kar man ghat”
Translation: “If u want to break down the temple, then make your heart stronger”) which is why the place got the name kar-man-ghat.
Aurangzeb got scared and left the place as his heart was not strong enough for a reattempt.

Later, Aurangzeb occupied Golconda Fort in Hyderabad and also took the most precious Kohinoor Diamond to become the richest monarch in the world, during his time.

Hanuman at Karmanghat temple, Hyderabad, Telangana state of India is Dhyana Anjaneya Swamy, who appears as if his face embossed on stone and is in meditation mode.
There are also smaller temples of Siva, Rama etc around it built by various kings.
Karmanghat temple stands as a pillar of strength, especially during times when Aurangzeb was ordering destruction of major hindu shrines like Viswanath Temple in Varanasi.
Multiple hindu temples like Vishnu Pada Mandir, etc were forcefully converted into mosques by Mughals but Karmanghat withstood the test of time.

For multiple years, one family from Maharashtra performed Pooja etc in this temple, as it remained neglected.
During mid 1990s, locals have gathered funds and started developing the temple.