Lord Jagannath in Puri is Narasimha, Lord Vishnu’s avatar who killed Hiranyakasipu.
Tradition in Puri says that even before the appearance of Jagannatha as wood logs in sea, Narasimha was residing in Nilachala beside Kalpa Bata as Adi Narasimha.
Lord Jagannath is worshipped in form of Narasimha, on the eve of Narasimha Chaturdasi. 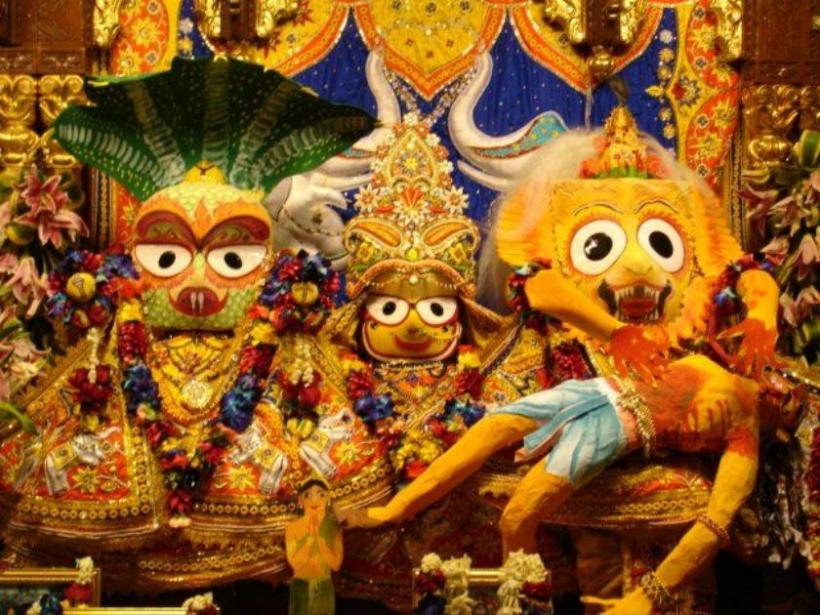 There are 105 major temples of Narasimha in Odisha and 169 in Andhra Pradesh. This cult of worshipping Lion-God exists more along the east coast of India.
The icon of Jagannath is a carved and decorated wooden stump with large round eyes and a symmetric face, and the icon has a conspicuous absence of hands or legs. The worship procedures, sacraments and rituals associated with Jagannath are syncretic, and include rites that are uncommon in Hinduism.
Only animals have round eyes. All Vishnu avatar temples have idols with lotus petal shaped eyes.
Lord Narasimha appeared from a wooden pillar, which Hiranyakasipu broke with his mace.
In hymn 10.155 of the Rig veda, there is mention of a Daru (wooden log) floating in the ocean as apurusham. Acharya Sayana interpreted the term apurusham as same as Purushottama and this Dara wood log being an inspiration for Jagannath, thus placing the origin of Jagannath in 2nd millennium BCE.
The original image of Jagannath (a deity form of Vishnu) at the end of Treta yuga manifested near a banyan tree, near seashore in the form of an Indranila mani or the Blue Jewel. It was so dazzling that it could grant instant moksha, so the God Yama wanted to hide it in the earth, and was successful. In Dwapara Yuga King Indradyumna of Malava wanted to find that mysterious image and to do so he performed harsh penances to obtain his goal. Vishnu then instructed him to go to the Puri seashore and find a floating log to make an image from its trunk. 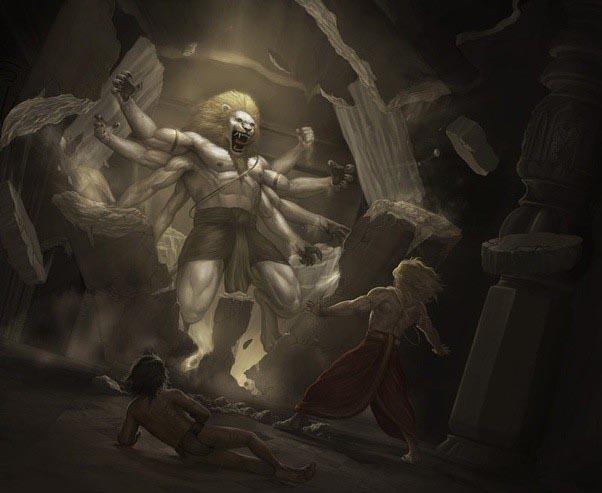 This wooden log is the broken piece of that pillar from where Lord Narasimha emerged. 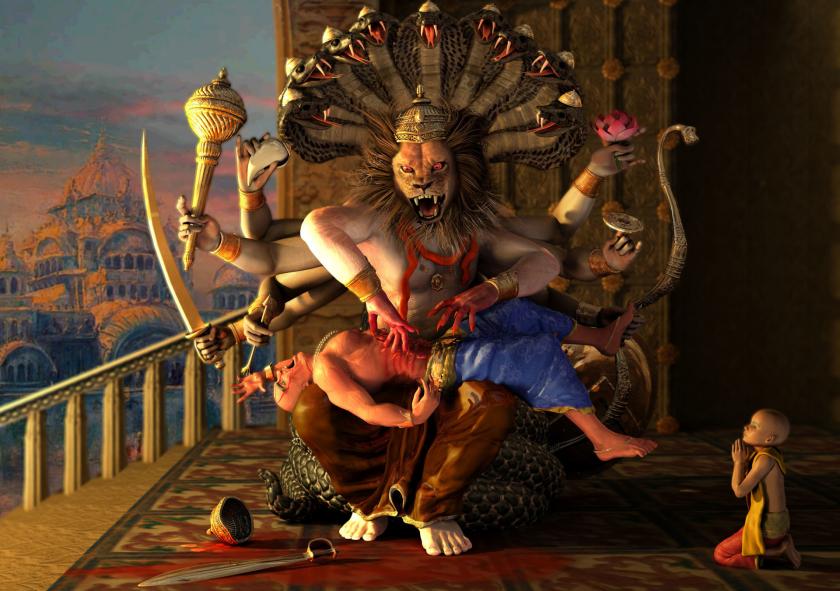 Indradyumna found the log of wood. He did a yajna from which God Yajna Nrisimha appeared and instructed that Narayana should be made as fourfold expansion, i.e. Paramatma as Vasudeva, his Vyuha as Samkarshana, Yogamaya as Subhadra, and his Vibhava as Sudarsana. Vishwakarma appeared in the form of an artisan and prepared images of Jagannath, Balabhadra and Subhadra from the tree.
This is mentioned in Mahabharata and Puranas.
King Indradyumna was son of Bharat and Sunanda of Malava Kingdom.
This concludes that Lord Jagannath is not Lord Krishna and other 2 idols are not Balarama or Subhadra (siblings of Krishna), as Jagannath existed much ahead of Krishna avatar.

The round eyes, mouth and face shape of Lord Jagannath is very much similar to Narasimha.

Skanda-Purana, Brahma Purana and other Puranas and later Oriya works state that Lord Jagannath was originally worshipped as Lord Neela Madhaba by a Savar king (tribal chief) named Viswavasu. Having heard about the deity, King Indradyumna sent a Brahmin priest, Vidyapati to locate the deity, who was worshipped secretly in a dense forest by Viswavasu. Vidyapati tried his best but could not locate the place. But at last he managed to marry Viswavasu’s daughter Lalita. At repeated request of Vidyapati, Viswavasu took his son-in-law blind folded to a cave where Lord Neela Madhaba was worshipped.

Vidyapati was very intelligent. He dropped mustard seeds on the ground on the way. The seeds germinated after a few days, which enabled him to find out the cave later on. On hearing from him, King Indradyumna proceeded immediately to Odra desha (Odisha) on a pilgrimage to see and worship the Deity. But the deity had disappeared. The king was disappointed. The Deity was hidden in sand. The king was determined not to return without having a darshan of the deity and observed fast unto death at Mount Neela, Then a celestial voice cried ‘thou shalt see him.’ Later the king performed Aswamedha Yaga and built a magnificent temple for Vishnu. Sri Narasimha Murti brought by Narada was installed in the temple. During sleep, the king had a vision of Lord Jagannath. Also an astral voice directed him to receive the fragrant tree on the seashore and make idols out of it. Accordingly, the king got the image of Lord Jagannath, Balabhadra, Subhadra and Chakra Sudarshan made out of the wood of the divine tree and installed them in the temple.
When this log, radiant with light was seen floating in the sea, Narada told the king to make three idols out of it and place them in a pavilion. Indradyumna got Visvakarma, the architect of Gods, to build a magnificent temple to house the idols and Vishnu himself appeared in the guise of a carpenter to make the idols on condition that he was to be left undisturbed until he finished the work.
But just after two weeks, the Queen became very anxious. She took the carpenter to be dead as no sound came from the temple. Therefore, she requested the king to open the door. Thus, they went to see Vishnu at work at which the latter abandoned his work leaving the idols unfinished. The idol was devoid of any hands. But a divine voice told Indradyumana to install them in the temple. It has also been widely believed that in spite of the idol being without hands, it can watch over the world and be its lord. Thus the idiom. 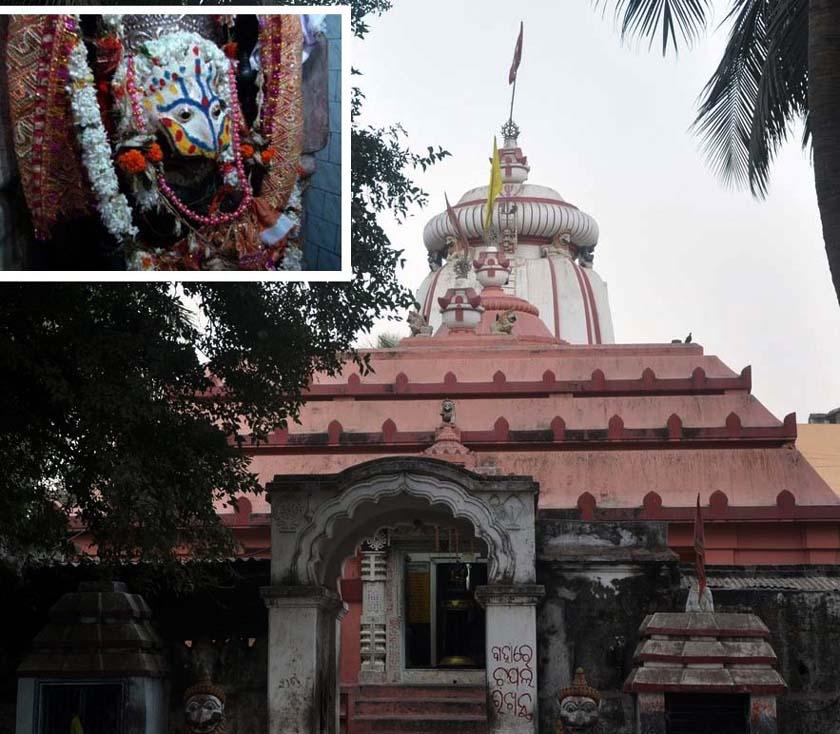 Narasimha mantra forms a very important aspect of the rituals of the Jagannatha temple, from their very beginning.
The Purushottama mahatmya of Skanda Purana says that after the ritual performed by Brahma, king Indradyumna perceived the Deities in the form of Narashimha. Brahma instructed Indradyumna to draw the Narasimha yantra (cakra bija mandala), had the king sit inside it, initiated him in the Narasimha mantraraja (still used today). 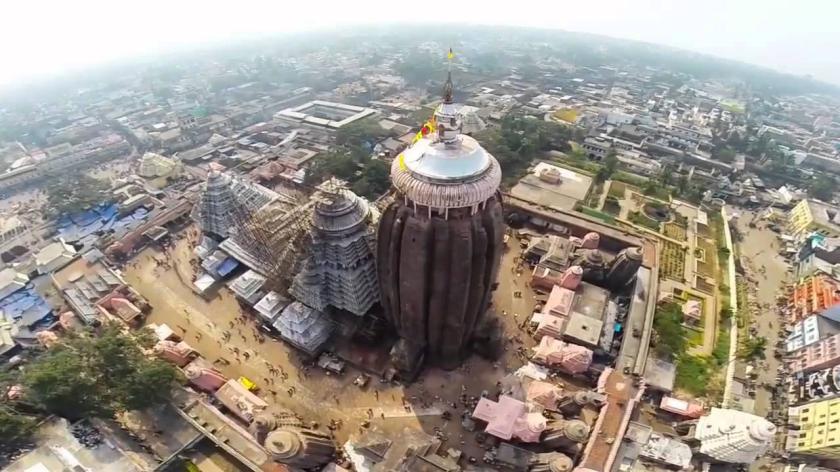 Indradyumna then had a vision of Yogi Narasimha (the benevolent form of Narasimha, as opposed to the Ugra Narasimha, the terrifying form), sitting inside a yantra formed by a lotus of 32 petals, hands on His knees, and Lakshmi Devi sitting on His lap. Narasimha looks at Lakshmi with a broad smile, and is shaded by the 1,000 hoods of Sesa Naga on His back. Sesha is identified as Balabhadra (Sankarshana) and Lakshmi is identified as Subhadra (Not the sibling of Krishna)
.
The original yajna for the installation was offered to Narasimha, the presiding Deity of Orissa before the appearance of Jagannatha, and the Adi Narasimha temple near Gundicha is considered the original Deity at the place of the first installation of Jagannatha.
Still today, in Puri Jagannatha temple the first offering is done to Narasimha and the nyasa (the tantric ritual of worship consisting in installing mantras on the body of the worshiper for its spiritualisation) is based on the Narasimha mantraraja. Also, the Puja Sevakas in the Jagannatha temple are initiated at the Khamba Nrisimha pillar, where an image of Lakshmi Narasimha is worshiped.
During the period of anavasara (when the Deities of Jagannatha are kept in seclusion for their renovation) all the temple offerings are presented to Narasimha, and during the rituals of Navakalevara the Deities are addressed as Narasimha up to the last moment.

One can notice Lion shaped carvings on top of Puri Jagannath temple and also inside. 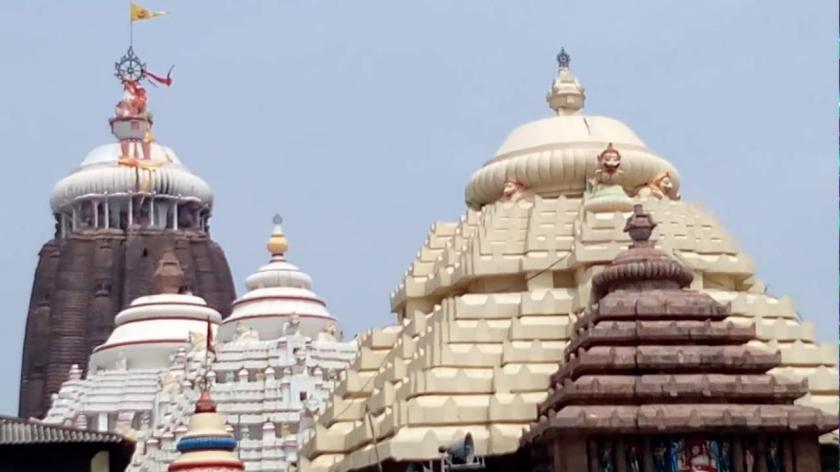 If it was Krishna, then why Lions and no trace of anything related to Krishna’s life. 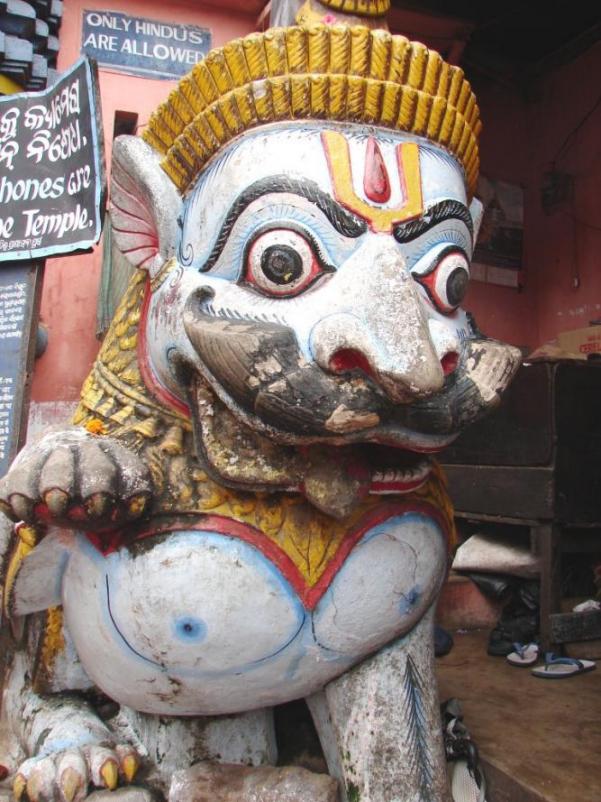 Lord Jagannatha was previously worshiped as Narasimha only, and He came to be considered as Krishna only in the period of king Purushottama Deva. On the bank of the lower Brahmani river, in Jenapur and Sukhinda, two traditional mathas worship Narasimha as salagrama and Dadhi Vamana (the single standing Jagannatha form) by the Narasimha mantra. 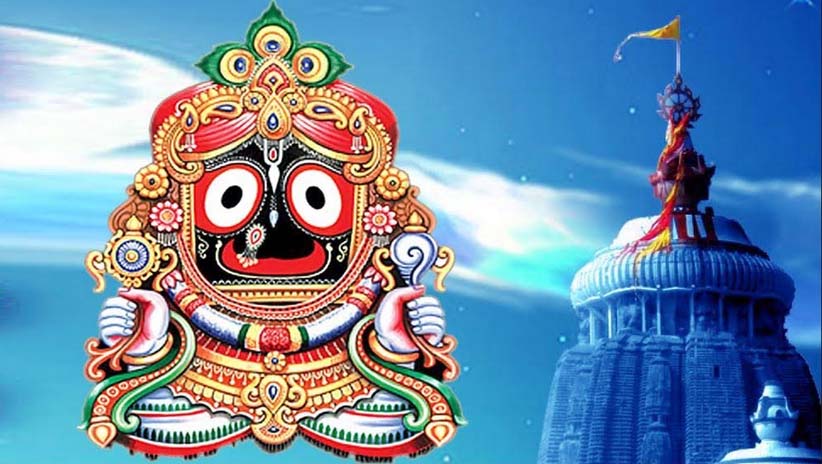 In Andhra, few villages have wooden pillar with Lion head, being worshipped as Lord Narasimha.

Jagannath icons are produced from wood. They are replaced every 11 to 14 years.
This transformation of old bodies into new bodies made of neem wood is called Nabakalebar. 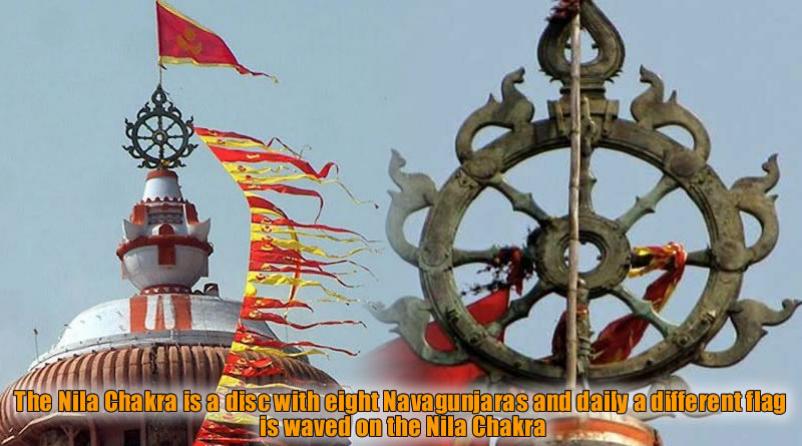 Ratha Yatra or Chariot Festival is the oldest Yatra taking place in India and the World, whose descriptions can be found in Brahma Purana, Padma Purana, and Skanda Purana and Kapila Samhita.
This annual festival is celebrated on Ashadha Shukla Paksha Dwitiya (second day in bright fortnight of Ashadha month).
The festival commemorates Jagannath’s annual visit to Gundicha Temple via Mausi Maa Temple (aunt’s home) near Balagandi Chaka, Puri.
As part of Ratha Yatra, the deities of Jagannath, Balabhadra and Subhadra are taken out in a procession to Gundicha Temple and remain there for nine days.They are also accompanied by Sudarshana chakra. Then the deities or Ratha Yatra return to the Main temple. The return journey of Puri Jagannath Ratha Jatra is known as Bahuda Jatra.