Mundakopanishad written around 6000 BCE in ancient india, is associated with the Atharvaveda.
It describes about Tachyons (particles that travel faster than light), Ultra-Violet band, Infra-Red band, Nuclear Energy and Black Holes in the space. 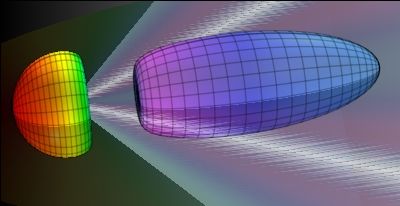 Mundakopanishad might have derived its name from ‘munda‘ (shaven head of a monk).
It has three chapters and each chapter is divided into sub chapters which are called “Khanda“. In total this Upanishad has 64 Mantras.
This Upanishad divides all knowledge into two categories. The knowledge that leads to Self Realization is called Para Vidya (Great or Divine Knowledge) and everything else is called Apara Vidya or Knowledge of Material world (wordly knowledge).
Another important feature of this upanishad is its lauding of Sarva Karma Sannyasa or Renouncement of All Action. Thus encourages the opinion that monkhood is good way for attaining self-realization.

In 1st chapter, 2nd section, it has a mantra which describes seven flickering tongues of the fire(light/energy).
Those are Kaali (black one), Karaali (terrific one), Manojava (swift as the mind), Sulohita (the deep red), Sudhumravarna (the smoke-coloured), Sphulligini (sparkling) and the Viswa-Rupi or the Viswaruchi (having all forms).
Whoever performs his Karmas (Agnihotra etc.), when these flames are shining and in proper time, then these oblations lead him through the rays of the sun to where the one lord of the Deva dwells.

The properties described for Manojava are same as for Tachyon, which travels faster than light and its speed is equal to that of human mind.
In modern science, Tachyon, (pron.: /ˈtæki.ɒn/) (term in use since 1967) is a hypothetical faster-than-light particle.
In the 1967 paper that coined the term, Gerald Feinberg proposed that tachyonic particles could be quanta of a quantum field with negative squared mass.

The descriptions of Sulohita is similar to Infra-red rays, of Sudhumravarna is similar to ultra-violet rays, Sphulligini same as nuclear energy and Viswaruchi same as Black Hole in space that can absorb everything.