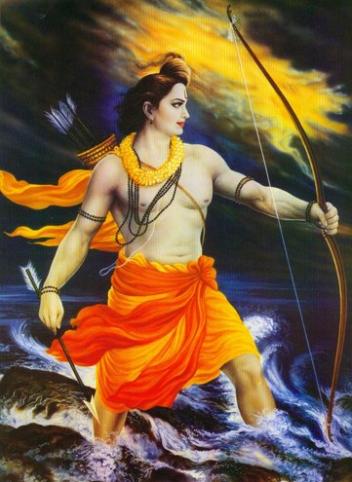 Itihaasa is wrongly interpreted as mythology by ignorant translators.
Mythology deals with Myths and stories, while itihaasa means iti – ha – aasa (It thus happened).
Both Ramayana and Mahabharata were termed itihaasas, because their writers Valmiki and Vyasa were contemporaries to those times and have recorded history as it happened. (including their characters too in them).

Yuddha Kanda (War Episode) of first poem on earth, Ramayana, describes a situation in which Lord Rama is forced to dry Ocean with his Astra (missile) in order to create a way for his army to reach Lanka.
Ocean God gives way by reducing water force at the location where Vanara army stood and promised to help make it possible to see that they are able to cross over.
Then, Rama says that his great astra should not go in vain. In which region should it be descended?
Upon which, Ocean God says :

Translation : Towards my northern side, there is a holy place, well known as Drumatulya, in the same way as you are well known to this world.
Too many robbers having the sinful Abhiras as their chief, drink my waters there.
I am not able to bear that touch of those wicked people, the evil doers, O, Rama! Let this excellent weapom with out vain be released towards them.

Upon hearing these words, Rama shot his weapon in that direction.

Translation : The place where the weapon, whose splendor was similar to that of a thunder and a thunder bolt, was descended by Rama, that place is famous as desert of Maru (present day Marwar) on this earth.

Translation : Earth, where Rama’s missle fell and pierced the ground, emitted a sound.
Waters of the penultimate subterranean region gushed out from the mouth of that cleft.
A hollow(lake) called Vrana was formed and water constantly seen, gushing out from it resembled seawater.
After a terrific splitting sound created by Rama’s missile, water dried up in that area.
This desert of Maru became famous in the three worlds. Rama (the son of Dasaratha), a wise man and a valiant man resembling a celestial, made that cavity dried up and gave a boon to that desert of Maru.

Translation : Due to Rama’s boon, desert of Maru became the most congenial place for cattle rearing, a place with a little of disease, producing tasty fruits and roots, with a lot of clarified butter, a lot of milk and various kinds of sweet smelling herbs.
This is how Rama created Thar Desert and blessed Rajasthan with Boons.